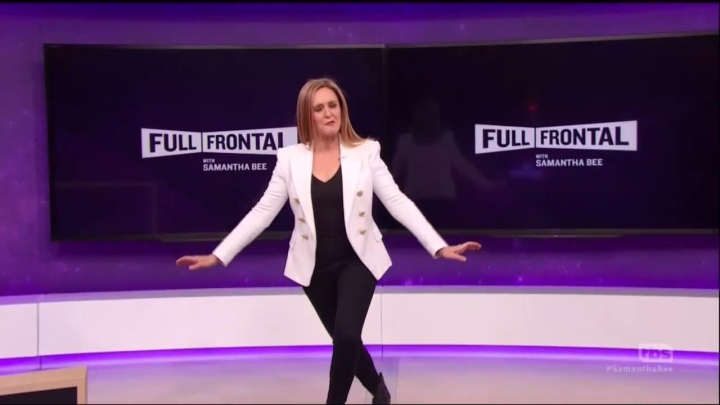 The Left is still in mourning over the retirement of Jon Stewart from The Daily Show. One poor fellow at The Atlantic just wrote a piece that suggests he needs a grief counselor

"Slowly, though, it began to sink in: the dimension of our loss. Jon Stewart was gone—our sanity, our balance," James Parker wrote. "In nuking the news-givers, petarding the pundit class, he became one of them—became, in fact, the pundit/news-giver for a generation of viewers."

Say what you will about his politics, Stewart was a jester giant, a comedy Cronkite, next to his successor, Trevor Noah. Never heard of him? We rest our case.

Daily Show veterans passed over for the top job are doing spinoffs. John Oliver took his British-accented (mostly) leftist mockery and joined Bill Maher at HBO. The newest spinoff is Samantha Bee, passed over for the Stewart job after 12 years of badly edited hatchet jobs and badly disguised loathing of conservatives and religious folks. She’s had to settle for appearing only on Monday nights on TBS in a show called Full Frontal.

Time magazine posed an unintentionally hilarious question to Bee: “Are you going to strive to be impartial on Full Frontal?” Bee replied: “We’ll try to be equitable.”

That is simply not true. Is she lying? Is she dense? Then she proclaimed the obvious, contradicting herself: “But my passions do go down a certain thread, and I plan to follow them. I think it will be less impartial than The Daily Show.” If that’s even possible.

Her first show began with mock journalists asking her how she was going to do all this as a woman and she broke out into a horror-movie witch sequence. So she’s a witch named Samantha, and liberals are bewitched. In an NPR interview, Bee claimed her mother was an actual Wiccan, so maybe that was the show’s opening prayer of sorts.

On her first show, she announced just how tilted to the Left this was going to be. It began with a few jabs at Bernie and Hillary, including telling Mrs. Clinton to “[screw] off” when she claimed at a CNN town hall “I never thought I’d be on the stage here,” running for president. But the real rage was saved for the conservatives.

“We wrote like two hours of jokes about Democrats but we had to throw them all out because then the Republicans laid out a banquet of all-you-can-eat crazy. Exhibit A? “Iowans chose this fish-faced, horse-s--t salesman Ted Cruz as their new prized heifer.”

After showing a clip of CNN’s Dana Bash asking Senator Cruz’s wife Heidi how she feels when people say her husband is impossible to get along with, Bee cracked “It's not his fault, Dana. My husband has Stage Four cancer of the personality.” Then she added an aside. “Now, look. I dislike Ted Cruz as much as the next everyone, but that's no reason to be rude to Ted's loving wife and possible hostage.”

Bee played a clip of Marco Rubio complaining that no one at Democratic debates ever asks why Hillary Clinton supports abortions up to the due date. This is fact: Clinton’s position holds that abortion is perfectly legal and acceptable to end the life of a baby one day...one hour...one minute before birth.

Bee spat out an angry reply: “That is literally the stupidest thing I've ever heard. Removing a baby on the due date isn’t an abortion. It’s called a Caesarean. But, you know what? That’s fine. Keep telling your cabal of fetus fanatics that Hillary Clinton wants us to carry term and then deliver our babies directly into a Vitamix [blender] so that Planned Parenthood can sell it to Whole Foods.”

What’s a little human sacrifice among the witches?