The Center for Medical Progress has now issued a third recording of Planned Parenthood officials explaining their grotesque trafficking in baby body parts. It is even more devastating than the first two.

The “news” media barely covered the second installment.  They will probably pass over this one altogether. Trump World is apparently far more important than the extermination of babies for profit. 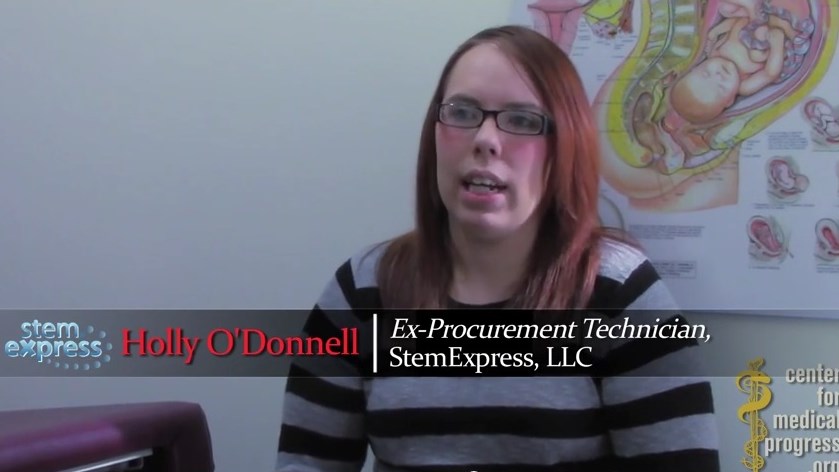 The star of the new video is Holly O’Donnell, a young phlebotomist who worked for six months as a “procurement technician” for a company called Stem Express, which buys baby “specimens” from Planned Parenthood. She thought she would just be drawing blood. She had no idea she’d be called to dissect babies. She fainted on her first day of training after being instructed to pick up a baby’s leg with a pair of tweezers.

She discussed how she worked inside Planned Parenthood clinic where the baby remains were brought to her to prepare for sale.

"For whatever we could procure, they would get a certain percentage," she explained. "No one else really cared, but the main nurse did because she knew that Planned Parenthood was getting compensated." The technicians were asked to harvest “certain tissues,” O’Donnell said, including brain, liver, heart and “pretty much anything on the fetus.”

The video turns visually gruesome when a hidden camera showed a tiny 11.6-week baby placed on a light tray, enabling them to discuss how much they could get for the parts, as if this were a Buick in a junkyard.  Dr. Savita Ginde of Planned Parenthood of the Rocky Mountains in Denver explained they prefer to set compensation by the item:  “We don't want to do just a flat-fee (per baby) of like, $200. A per-item thing works a little better, just because we can see how much we can get out of it.”

Then it even shows Dr. Ginde looking down at a tray of baby kidneys saying “If I looked at that, I’d be like ‘that’s good to go’” – and she laughs about it. A medical assistant says “Five stars!” They’re laughing at Planned Parenthood as they carefully tweeze babies apart.

CMP has also released a document from StemExpress laying out that the “procurement technicians” are paid $10 per hour, plus a “per tissue or blood bonus.” Bonuses range from $75 per tissue for “Category A” fetal tissues (such as brain, heart, lungs, liver) to $10 per tissue for “Category C” products (such as maternal blood or umbilical-cord blood). The more “specimens” collected by the technician, the higher the bonus for each item.

How can our media elites look at these videos and just bury them? Politico reported Planned Parenthood hired the crisis communications team at SDKnickerbocker, who circulated a memo pressuring reporters and producers from showing any more videos, “arguing they were obtained under false identification and violated patient privacy.”

Never mind that there are no patients shown in these videos to date, or that these national journalists have themselves used “false identification” in undercover stings. The vast majority of the media are easily pressured into silence, or embarrassing denials of grim reality.