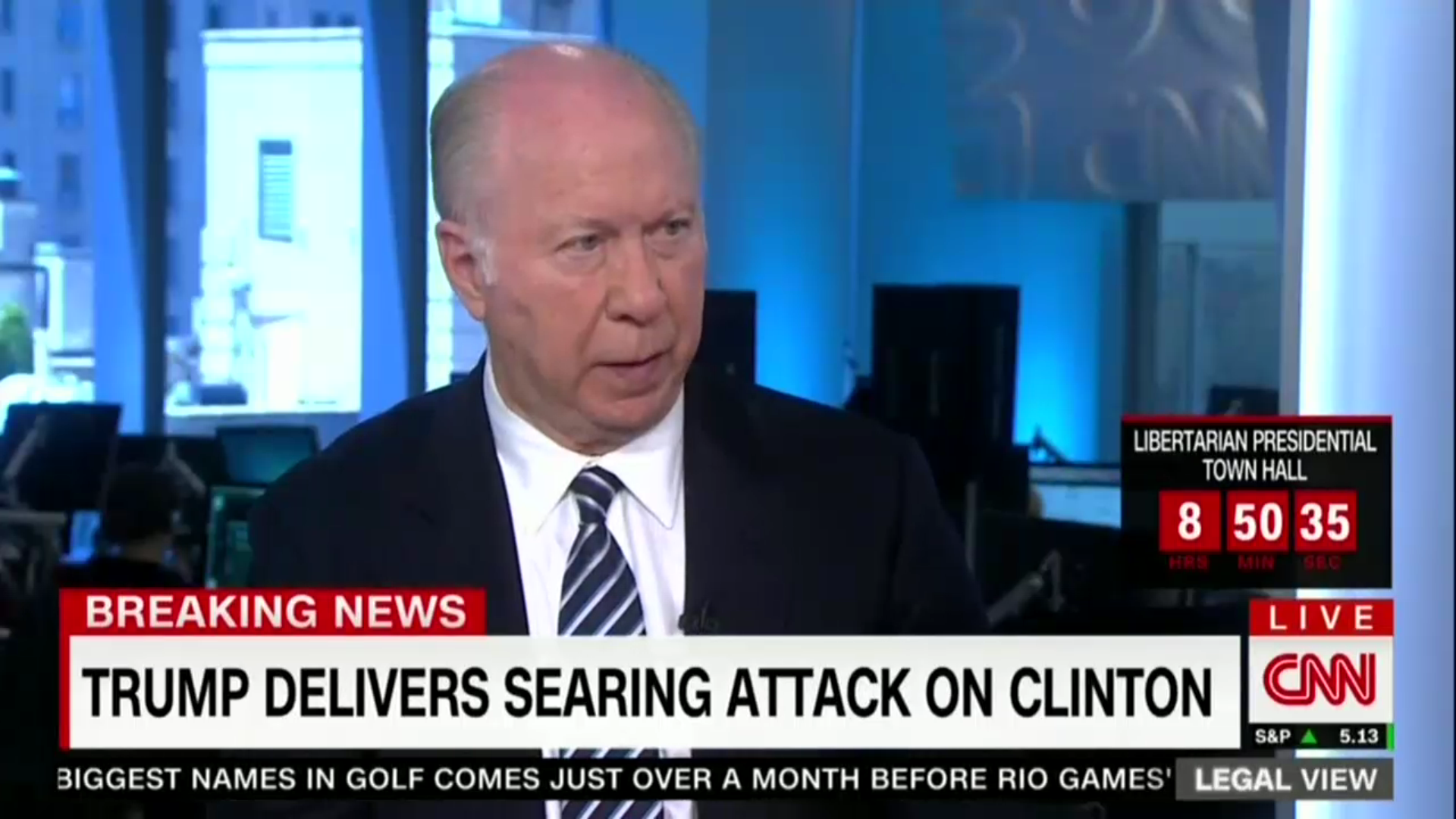 Appearing as a guest on Wednesday's Legal View with Ashleigh Banfield to react to GOP presidential candidate Donald Trump's speech attacking Democrat Hillary Clinton, CNN political commentator David Gergen fretted over charges that the Clinton duo had been "corrupt" in their handling of the Clinton Foundation, with the CNN commentator calling the charge "slanderous."

After dismissing Peter Schweizer's book, Clinton Cash, as "discredited," he worried that some of the attacks on Clinton are motivated by "gender" and recalled that a "civil war" came not long after divisive White House campaigns involving President Andrew Jackson in the 1800s.

It's become apparent that what's going to be driving each campaign is demonizing the other one. but I must tell you that the substantive level -- Donald Trump didn't change suddenly in terms of what he was saying. It's still slanderous. It is still a series of attacks that are going to leave the Clinton people just seething, you know, with the misstatements.

Let me just go to two issues that I think are pretty darned important because he's essentially charging she's corrupt, and you know he said he quoted somebody saying she ought to be in prison, not in the White House.

So his charge basically is that her husband had this foundation, and it was all pay for play. You give money to him, she changes her policies. He based that on a book called Clinton Cash.

After Banfield noted that the author was Peter Schweizer, Gergen added:

He has been widely discredited. Schweizer himself has gone before national news organizations and said, "I don't have that much to prove that. I see a pattern that ought to be investigated." And Trump takes it, says it's basically all true.

We're going to places in American politics we have not seen in our lifetimes. ... We saw it in the early days of the republic. We've seen it a few times in our history, but not in modern times.

A bit later, he theorized that Clinton is being treated worse because she is a woman:

I must tell you, I think we've also wandered onto gender territory here. I think this is partly about -- I don't think a man would be necessarily treated this same way. ... Barbara Bush used to say, 'Well, I won't say what that person is, but it rhymes with 'witch.'" And there's that quality that people are using against her, and, you know, she's fighting back . she's playing the gender card herself in trying to get elected.

I want to get back to this, the whole notion, both sides are engaging in a level of discord that is far worse, that is far darker than what we've seen in the past, and we, the Trump people have decided the way we can get there is to demonize Hillary, to demonize her and to totally rough her up. And the Hillary people have said the best way we can get there is to disqualify Donald Trump right from the beginning, just jump all over it.

BANFIELD: Maybe this isn't modern history, but isn't it Andrew Jackson whose wife ended up dying of sorrow because of the campaign hatred and disgust that was laid upon her and their marriage.

GERGEN: He was always angry-

BANFIELD: It ain't like we've never been here before.

GERGEN: We've been here before, but, you know, we got into some of these things before and where did it lead? It led to a civil war.