Appearing on Friday's Wolf show on CNN to discuss the motivations of Muhammad Youssef Abdulazeez's attack on a military recruitment center in Chattanooga, Tennessee, CNN global affairs analyst Kimberly Dozier -- formerly of CBS -- fretted that the American "public" will perceive the rampage as a "Muslim militant attack," feeding more "anti-Islamic sentiment" which could lead to Muslims committing even more terrorist attacks. Dozier:

What worries me is that -- how this will be perceived by the public, though, is a Muslim militant attack. And I'm already seeing among friends in the national security community a rising sense of anti-Islamic sentiment. I'm worried that that will feed into more attacks like this and undercut the efforts to reach out to the American Muslim community and include them rather than make them feel isolated, as it seems this young man felt.

A few minutes earlier, Dozier had hinted that anti-Muslim experiences in America may have played a role in Abdulazeez deciding to turn to terrorism: 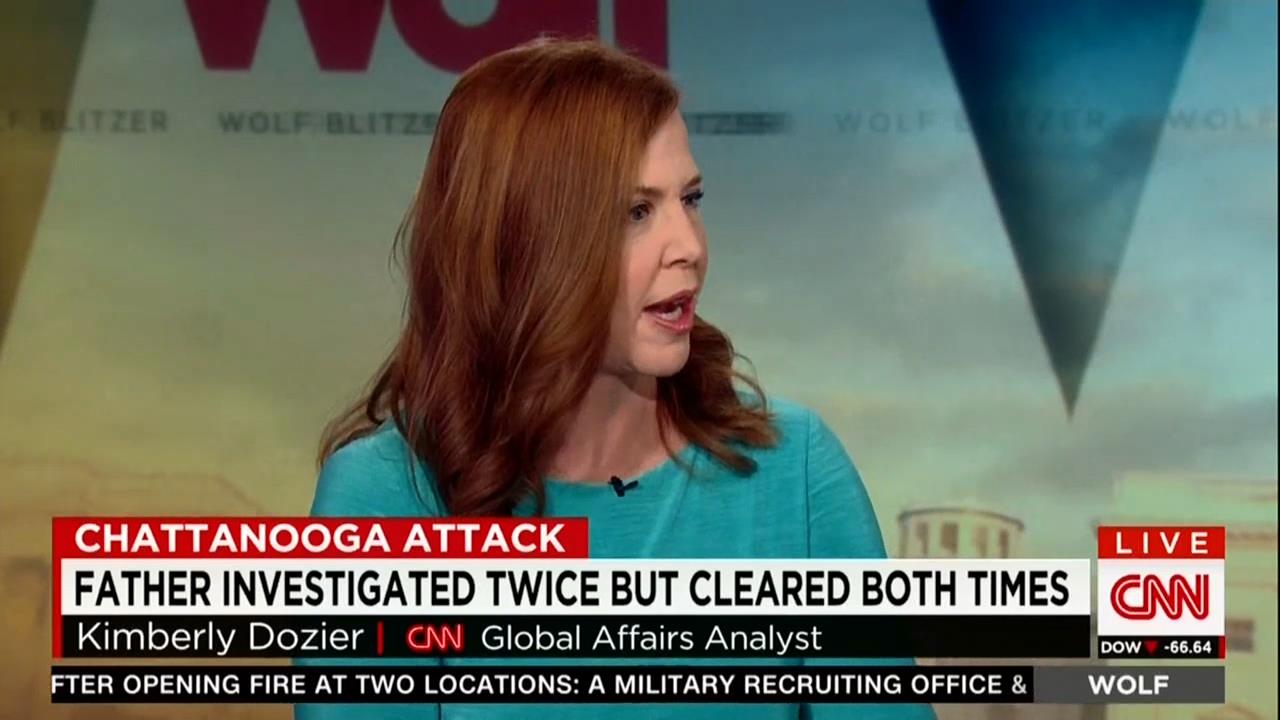 KIMBERLY DOZIER, CNN GLOBAL AFFAIRS ANALYST: When you look at some of the blog posts which haven't been definitively proven to belong to Abdulazeez, but they are carefully talking about Islam in general terms and following jihad in an active way. They talk about the followers of Muhammad taking up arms and actually bringing about the caliphate on the ground.

So he's left us clues to what might have been motivating him. Also, look back to his yearbook posts when he talked about his name causing national security alerts. This is a kid that from a young age has had issues with being singled out for being Muslim, and if your dad had been on FBI terrorist watch list and had been questioned by the FBI, you can bet that that was a subject of household discussion that stayed with him.

WOLF BLITZER: I'm sure it had an impact on him as well.

In her days at CBS, Dozier similarly pushed suggestions that anti-Muslim sentiment in the U.S. was partly to blame for young Muslims turning to extremism. From the December 12, 2009, CBS Evening News:

KIMBERLY DOZIER: But Muslim community leaders here say young people are also being driven to extremes by post-9/11 anti-Muslim propaganda like this-

TEXT ON SCREEN: Muslims Are Taking Over The World; and faster than you ever imagined.

UNIDENTIFIED NARRATOR: There are over nine million (Muslims in the United States).

DOZIER: -and rising incidents of genuine anti-Muslim discrimination. Civil rights complaints have jumped 10 percent in just the past year, according to the Council on American Islamic Relations.