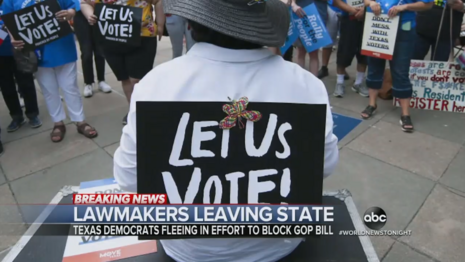 Remember when the media joined Democrats in condemning the filibuster as an outdated practice that only gummed up the legislative process? Evidently journalists don’t, because when Democratic state legislators from Texas fled their state last Monday to sabotage the passage of a bill they didn’t like, they became the national news media’s heroes of the week.

If the sappy coverage is any indicator, those Texas Democrats are likely to hold onto that title for as long as they stubbornly remain in D.C., where they are currently pressuring Congress to override all state election laws with unprecedented sweeping federal reform.

Along with the standard dishonest framing of this situation as a clash between “voter suppression” advocates (Republicans, aka) and voting rights champions (Democrats, aka), some liberal journalists have begun to tout the Texas Democrats as tactical role models for the rest of the Democratic Party. MSNBC’s Joy Reid last Tuesday described their abdication of duty as “showing Democrats here in the Capitol how to fight.”

For a round-up of the media celebrating these Democratic Texas lawmakers, watch the video below:

The media have been so shamelessly partisan in their coverage of election reform that one of the Texas legislators actually thanked CNN and their ilk on national television for working to “shine a bright light” on the “injustice” of GOP-backed election security laws.

The hypocrisy of supporting this stunt by Texas Democrats while at the same time reviling the Senate filibuster is a bad look for the media. They should probably stop before their approval rating dips any lower.