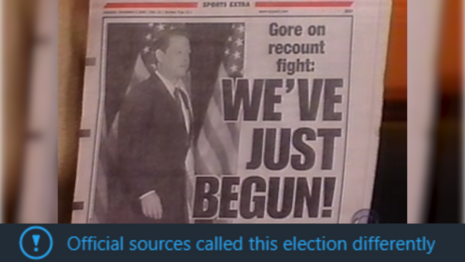 After the 2000 Presidential election, TV journalists indulged losing candidate Al Gore’s protracted attempts to overturn the election, treating his lawsuits and requested recounts with great respect. Yet the same media today are exasperated by President Trump’s refusal to concede. Pundits incuriously dismiss the Trump campaign’s lawsuits as “frivolous” and the recounts as “pointless,” meanwhile demanding that the President “face reality” and stop being a “sore loser.”

While today’s media have made a habit of sternly lecturing viewers that there is “no evidence” of any election fraud, back in 2000 they were the ones most loudly championing such allegations. On the November 28 edition of CBS Evening News, host Dan Rather argued: “Some say, listen, is the fix in in Florida?”

Meanwhile, future Good Morning America co-anchor George Stephanopoulos had already called the race for Gore: “There is no question, or very little question, that Al Gore won the votes cast in the state of Florida. The question is, will he win the votes counted?”

Twenty years after the fact, it’s difficult to imagine our media even entertaining the idea that something improper might have happened in a Presidential election. To see just how sharply the media have reversed their collective stance on potential election improprieties, watch the video below: