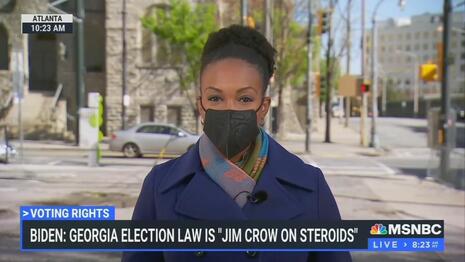 Reporters? Or unpaid publicists? On her Thursday show, MSNBC's Hallie Jackson was joined by NBC reporter Blayne Alexander in Atlanta just publicizing calls to boycott Georgia and the lies that justify them, including President Biden's Wednesday remarks where he outrageously called the Georgia's new election law "Jim Crow on steroids."

MSNBC just casually put that on screen, like it was an authoritative statement of fact.

Jackson noted that "The sports world and corporate America pushing back against the new law, too, as President Biden now says he supports calls to move the MLB All-Star game out of Georgia because of it and CEOs of Delta Airlines and Coca-Cola, both based in Atlanta are slamming the law as unacceptable."

Not pointing out that Delta flip-flopped in the face of partisan pressure, Jackson instead cited, "new numbers out this morning, from the nonpartisan Brennan Center for Justice, lawmakers introduced 108 bills to restrict voting in less than five weeks this spring." Even on screen is "nonpartisan" in tiny type.

Nonpartisan? The center is named for ultraliberal Supreme Court Justice William Brennan, and if he's your hero, you're probably ultraliberal. Its leader is Michael Waldman, best known as President Bill Clinton's director of speechwriting, which sounds pretty partisan. Before that, he ran the Congress Watch project of the Ralph Nader group Public Citizen, and that's ultraliberal.

Let's try this test. Plop "Brennan Center for Justice" into the OpenSecrets.com search engine and see the political contributions of people who list that as an employer.

Well, look at this, they're not just donating to Democrats, but to the partisan actors in this struggle like Sen. Raphael Warnock and Stacey Abrams' Fair Fight Pac! Joe Biden and Flippable, "to flip states blue." 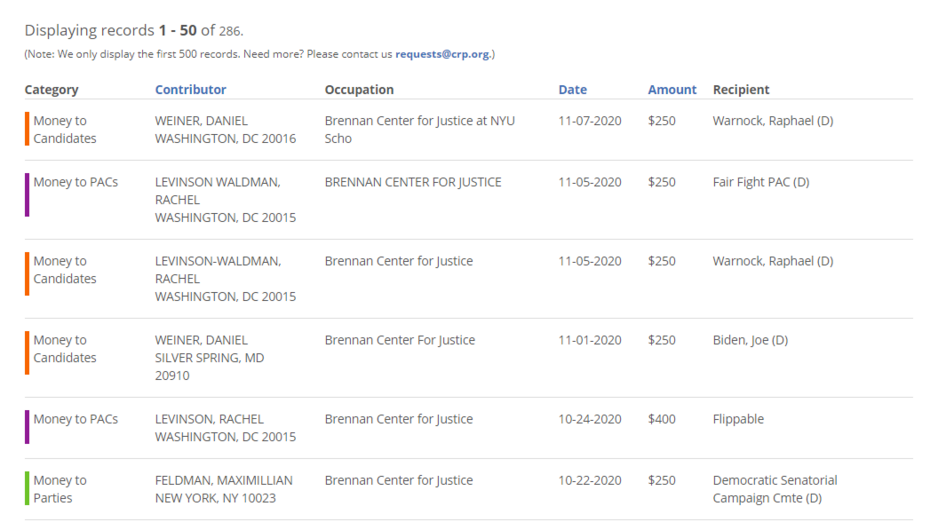 There are 59 liberal/Democrat campaign donations listed just in 2020. You can go back through the entire 286 results and not find a donation with an (R) on it. So always be skeptical when liberal networks claim something backs up their argument and is "nonpartisan."

Later in the segment, after playing Biden's ESPN remarks, Alexander did not correct the president, that Georgia's law is objectively not "Jim Crow on steroids," but instead noted that activists are not satisfied with corporations: "President Biden is speaking out against this. Now, even though we are seeing the CEOs come up and as there's been more pressure, more calls for boycotts on big businesses like Delta and Coke, you know, some people say even with these stronger statements it is not enough."

She also reported, well, publicized: "So, that's why in about two hours from now, a little less than two hours we will see a number of religious leaders here in Atlanta actually hold a news conference here in downtown calling for protests, calling for official protests, saying that, yes, even though the ink is dried here in Georgia and the ship has sailed, they want these businesses to actually do more not only to support House Bill 1 and House Bill 4, but also to oppose what they call restrictive legislation around the country."

Throughout the entire segment neither Jackson nor Alexander ever provided the opposing perspective. Because "fairness is overrated."