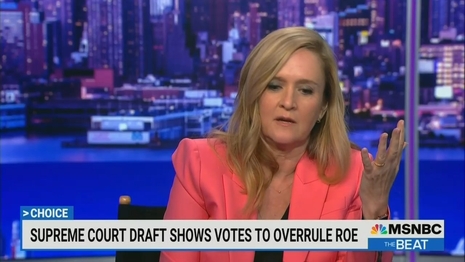 On Wednesday night, MSNBC host Ari Melber warmly welcomed TBS late-night radical feminist Samantha Bee to discuss abortion, hailing her for being “on the forefront with comedy and facts.”

Melber began the segment with a macabre “greatest hits” reel, highlighting her routines on The Daily Show and on her TBS show Full Frontal. These clips included Bee saying, “If you’re like me, you’re just a few weeks away from having fewer human rights,” asking someone if they had, “Thought about regulating the safety of back alleys, because that’s where a lot of women will be having their abortions now?” and, employing rhetoric that would probably put her on a watch list if she was talking about guns, “If they’re taking away our right to choose, fighting is the only choice we’ve got left.”

Left out of the “greatest hits” were lowlights like Bee denigrating Ivanka Trump as a “feckless c—t.”

The interview began with Melber and Bee reminiscing about a segment she ran in 2008 for Comedy Central’s The Daily Show, where she heckled pro-lifers at a convention for two days to get them to say the word “choice." When asked how she felt about Justice Alito’s draft opinion being leaked, Bee responded with a mixture of shock and grief:

Melber then read aloud a portion of Alito’s draft, where he cites early 18th-century legal documents as a precedent against legalizing abortion in the American legal system. Bee said this was “wildly unreasonable, wildly out of touch,” and that “You just can’t imagine this kind of — like — minority rule where the vast majority of the country wants something and is very comfortable with. . .To take it away is such a disgrace and an injustice.”

Picking up on the question of “minority rule,” Melber asked for Bee’s take on Justice Alito’s opinion that abortion could still remain legal in many states, since, “‘Women constituted 55 percent of the voters who cast ballots,’ and he reasons that those women can unite to keep abortion legal in any state if they choose to.”

Bee decided the best way to answer was to chuckle uncomfortably before randomly spouting, “We have to do something about the filibuster, okay?”

Huh? Was this about Congress failing to codify abortion-on-demand into federal law, so millions more unborn babies can be dismantled? Or was this about voting to expand the Supreme Court so the Democrats can pack it? Whatever the cause, MSNBC is very pro-Bee.

This dark inversion of grief was made possible by Subway and Ancestry. Their contact information is linked.

ARI MELBER: June is when the Supreme Court usually finishes its term, which means that draft ruling overturning Roe could come out this month and that would potentially overturn 50 years of precedent on women’s rights. And the draft has a major warning. It is defined against what we’ve heard from many people, from lawyers, to policy experts, to people across the culture who sounded an alarm that this is exactly what justices would do if they got on the court despite contrary pledges during their Senate hearings. And the first woman to host a late-night satire show Samantha Bee has been on that forefront with comedy and facts. She was of course on The Daily Show and then hosts Full Frontal with Samantha Bee on TBS.

UNIDENTIFIED FEMALE [on Comedy Central’s The Daily Show with Jon Stewart, 2008]: Adoption is one —

BEE [on TBS’s Full Frontal with Samantha Bee, 05/19/22]: Hi, welcome to Full Frontal, I’m Samantha Bee. And if you’re like me, you’re just a few weeks away from having fewer human rights. Fun. [SCREEN WIPE] I think we can limit precedents that control human bodies to after the same century that Genghis Khan did his thing. [SCREEN WIPE] Reproductive decisions made by men, who as best I can tell believe women lay eggs. [SCREEN WIPE] If they’re taking away our right to choose, fighting is the only choice we’ve got left. We’ll be right back.

MELBER: Today, we are joined by an Emmy Award-winning comedian and writer Samantha Bee, host and creator of Full Frontal with Samantha Bee. Welcome.

BEE: Thank you so much for having me.

MELBER: Let’s look at some of this coverage of women right — women’s rights and Roe.

BEE  [on TBS’s Full Frontal With Samantha Bee, 02/29/16]: Have you thought about regulating the safety of back alleys, because that’s where a lot of women will be having their abortions now?

UNIDENTIFIED MALE: I don’t believe it.

BEE [on TBS’s  Full Frontal with Samantha Bee, 10/11/17]: This bill has been rejected twice before in 2013 and 2015. It just keeps coming back to torment us every couple of years, like Transformers movies. [SCREEN WIPE] [on Comedy Central’s The Daily Show with Jon Stewart, 2008] What’s the word I’m looking for? Alternative?

BEE: It’s a bit of an — I feel emotional actually watching that.

MELBER: What makes it emotional for you?

BEE: I don’t know, it’s just — it’s been a really long journey, that choice piece I did. It was one of at the last set of conventions that I went to when I was working at The Daily Show. And that piece was really meaningful to me. Because it was like going out on the floor and talking to people. I mean, I spoke to people for two full days to make that piece. And it was like, you know, I’m not saying that this happened. But it was like the word “choice” had been erased from everybody’s vocabulary on purpose. Nobody would say the word there. Nobody would say the word at the convention. And I talked to probably 100 people, and nobody would say the word until the very end. It was just — you could have — I mean, I will never forget watching that piece down. We had a huge live audience that day. And that piece had been so hard to do, like, I’d been chased — people were — and I wasn’t even saying anything. I actually wasn’t even asking people difficult questions, but they figured out what I was getting at and I did get chased through the halls of the convention center. It was really, really difficult to film. And you could hear a pin drop in the audience when it was — when we were just watching people struggle with what they knew I wanted them to say, but they wouldn’t say the word choice. They just would not say it, they would not be on camera saying that word. And then finally, we got a few people to say it — the audience erupted. Like we just — it was really, it was really a moment.

MELBER: Was that more meaningful to you than laughter?

BEE: Ah, you know, I — it just — that level of catharsis meant a lot to me. It wasn’t — yeah, it wasn’t laughter. But it was meaningful to me, in that time.

MELBER: Would fully overturn Roe. How’d you feel when you — ?

MELBER: Can I read to you from the opinion?

MELBER: He cites a 17th-century treatise.

MELBER: Saying, quote, “the abortion of a quick child was a great misprision if the child dieth in her body,” end quote. Also, he notes, as legal support for overturning Roe and this right, that in 1732, a woman was sentenced to three years in prison for, quote, “destroying the fetus in the womb,” end quote. Do you think that’s persuasive for how rights should be established today?

BEE: Right. I mean, I don’t even know how to respond. I mean, obviously, I think it’s like, wildly unreasonable, wildly out of touch. I mean, I feel — I don’t even know how to encapsulate, how I feel when you read that to me in a moment. We’re going to talk, you know — we’re going to talk about it on the show this week, of course, we’ll be talking about it for years to come, I imagine. You just can’t imagine this kind of — like — minority rule where the vast majority of the country wants something and is very comfortable with something and they’re still living with this president — precedent for 50 odd years. To take it away is such a disgrace, and an injustice, imposing this kind of — anyway, you know how I feel about it. It’s obvious, right? It’s — I’m so sad. I’m so sad about it. I’m so sad about it.

MELBER: May I read you one more excerpt from the opinion?

BEE: Yes. But will it make me smile? Is it a comedy part?

MELBER: Quote, “Women affect the legislative process and vote at consistently higher rates than the percentage of men who do so.” In November 2020, he notes that in Mississippi, quote, “Women constituted 55 percent of the voters who cast ballots,” and he reasons that those women can unite to keep abortion legal in any state if they choose to.

BEE: We have to do something about the filibuster, okay? Because if we don’t — something is going to be done about it in the future, and it’s not going to be in our favor, it’s going to get much worse, so we might as well do it now, okay?

BEE: You know, we’ve been talking about Roe v. Wade falling since the beginning of the show, you know, for seven years, we’re in season seven now, and look at where we are now? So, you hate that you — that I wasn’t wrong about that, but I wasn’t. And here we are. And it’s very, very dire. We need to feel better about the world we live in or at least we need to, like, express it if we’re not going to feel better about it. You know, I often interview people. I often interview people with, you know, it was just like the bleakest possible point of view and I feel better at the end of it, because I’m like, thank you for going there with me. Ok, like we went there.

MELBER: Samantha Bee. Thanks for joining us.

BEE: Thank you for having me. This was very delightful and very high-pressure. Reading to me from Supreme Court documents.