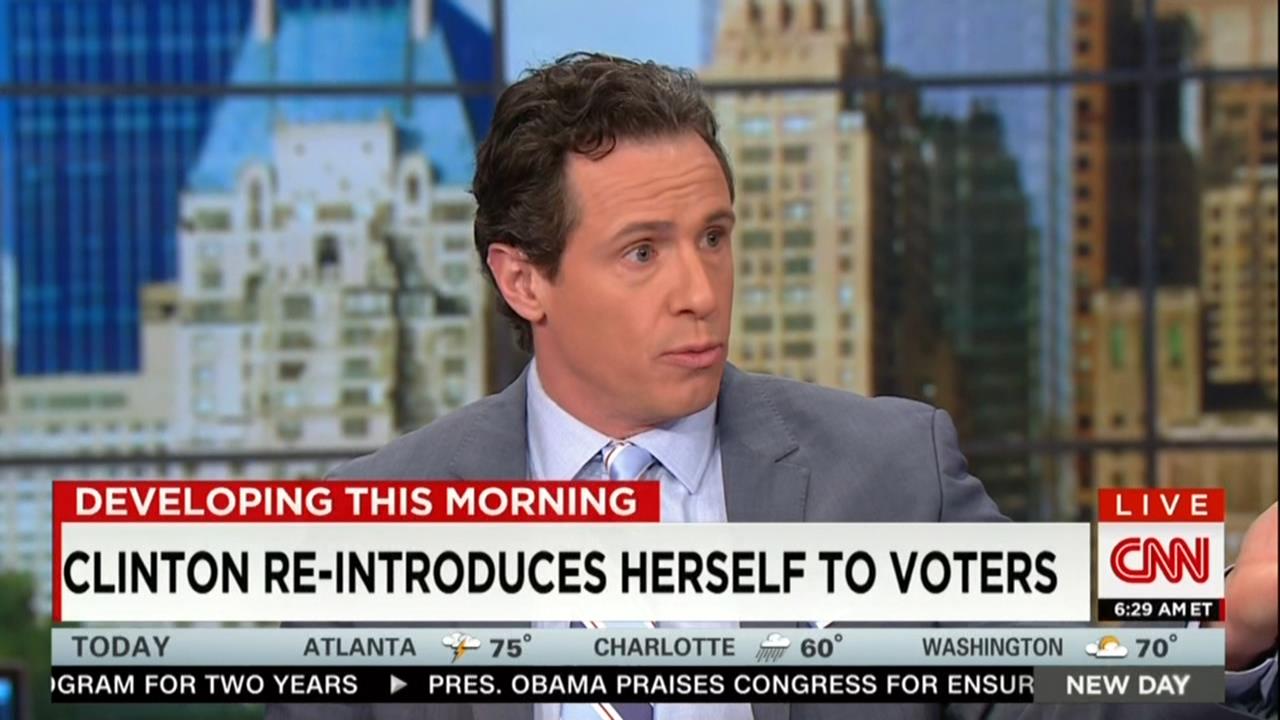 On Wednesday's New Day on CNN, a panel of journalists and pundits yucked it up over Hillary Clinton's recent incognito visit to a Chipotle restaurant in Ohio, and made light of her scandals. Maggie Haberman of the New York Times joked that Clinton "dominated Marco Rubio's rollout – which was a very impressive rollout – with pictures looking like she was robbing a Chipotle." Anchor John Berman cracked in reply that Haberman "just launched a Clinton scandal," with co-anchor Chris Cuomo adding, "Were they e-mailing about going into Chipotle?" [video below]

The CNN morning show brought on Haberman, along with regulars John Avlon of The Daily Beast, and his wife, Margaret Hoover, for their take on Clinton announcing her candidacy for the 2016 presidential race. Anchor Michaela Pereira turned to the New York Times correspondent first, and asked whether that the former first lady's "slow rollout – the low-key, no frills...except for the media frenzy that happened to follow...Clinton – so as much as she wants it to be that way, can it be? Just because you say it is doesn't mean the world is going to accept that as such."

Haberman replied by noting a past strategy from Clinton's 2000 Senate run, and continued with her robbery joke – which Berman and Cuomo replied to, and the remaining panelists laughed at:

MAGGIE HABERMAN, PRESIDENTIAL CAMPAIGN CORRESPONDENT, NEW YORK TIMES: It gets as close as you can to it. One of the things she did in 2000, when she was running for the Senate, is she was doing these sleep-overs at voters' houses....and they weren't really advertising those – right? So it basically had the effect of – look, this is real. I don't think we're going to see her bunking....at people's houses in Iowa this time around – or New Hampshire – but I think to the extent that they are capable, they're going to try.

What is striking to me about the last couple of days is they're basically running an Obama '08 strategy – right? Which is – in 2012, too – but, you know, we're engaged with the media. We're trying a new reset button. It's a fresher approach – but we're actually also going to bypass you. We're not going to tell you in advance that we're going on this van tour. We're going to tell you once she's in Altoona – or wherever it was on Sunday. We're announcing via video; and then, there was nothing really on Monday. She dominated Marco Rubio's rollout – which was a very impressive rollout – with pictures looking like she was robbing a Chipotle. (Pereira, John Avlon, and Margaret Hoover laugh). So, you know, at the end of the day, this is-

MICHAELA PEREIRA: In a suit-

HABERMAN: And I – this was – this was all over Twitter in that regard, too.

CHRIS CUOMO: Were they e-mailing about going into Chipotle?

PEREIRA: Give me all of your guacamole.

The New York Times correspondent also contended that her campaign rollout was "very effective," and added, "I don't know that they can sustain this....It looked like it went pretty well from the visuals. The question is, when she starts getting asked questions by the press, do random voters come up to her and ask her about the e-mails – things like that. That's where it becomes an issue."

Moments later, Berman turned to Avlon and wondered, "What about what she's saying? When does she need – when does this candidate need to put some meat on the policy bones here – lay out an economic plan –  any kind of plan?" The "no labels" Daily Beast editor actually complimented Mrs. Clinton, while taking a shot at the prospective Republican presidential candidates:

JOHN AVLON, EDITOR-IN-CHIEF, THE DAILY BEAST: Look, I think her experience as secretary of state sort of inoculates her from that immediate obligation. Nobody's questioning whether she's got policy wonk chops. So while the Republican field is totally fixated on showing they can be president...they're going to foreign policy school at night – they're trying to show that they can be taken seriously on the world stage – Hillary Clinton is kind of acting like she's got that covered. She wants to be relatable, very modest, and more – more direct. That itself is inauthentic-

BERMAN: But she's got to be tested, because yesterday, she dropped sort of a big policy bomb. She says, all of a sudden, campaign finance reform is going to be a giant deal to her, Margaret-

AVLON: That is a big deal-

MARGARET HOOVER, REPUBLICAN CONSULTANT: And that she would support a constitutional amendment.

To his credit, Cuomo interjected that Clinton was making her campaign finance reform recommendation "at the same time that her goal is – what? Two and half billion dollars to raise for the race?" Hoover continued that the Democratic candidate is "going to rely on some of those super PACs, because every single candidate is going to have them, and she's not going to get across the finish line without it."

The liberal Republican pundit later added that Mrs. Clinton's rollout was a "very choreographed event yesterday – even though it played well – I think, actually, she was probably at her most powerful talking about her parents; her roots; this Midwest homespun wisdom that she's grown up with – I actually don't know that I've seen Hillary speaking that authentically about herself."

Earlier in the segment, Berman defended the pool of journalists who ran after the former secretary of state as she pulled up to a campaign stop in Iowa on Tuesday. Haberman actually admitted that it wasn't a positive image for the media:

BERMAN: And look – and by the way, that's why reporters run around the corner like that, because you want to be there when the candidate walks up-

BERMAN: Because you don't know if they're going to answer a question or be asked a question. You have to be there. So, in defense of those reporters-