Rand Paul Schools the Media on Abortion: 'Ask the DNC: Is It OK to Kill A 7-Pound Baby?' 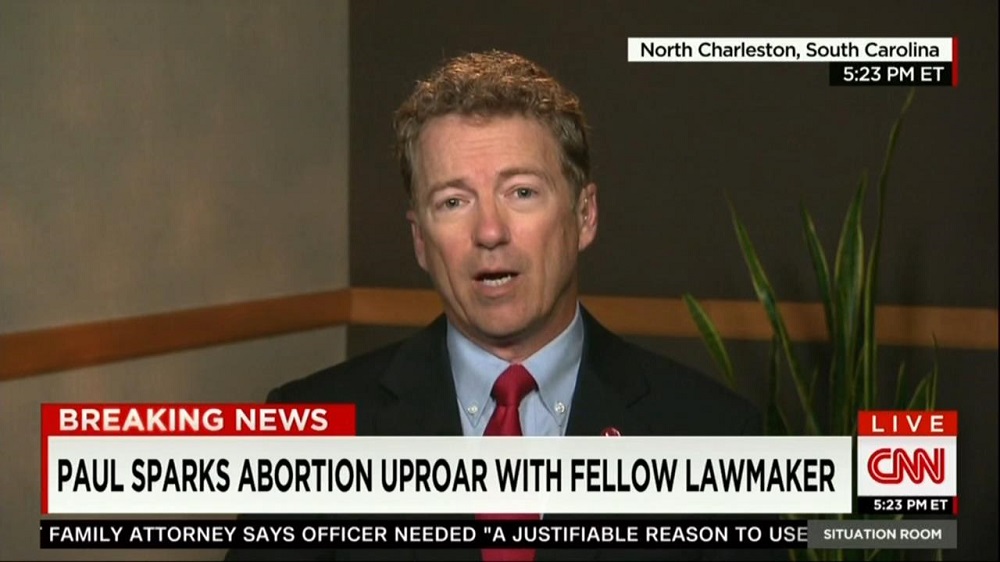 Newly-declared 2016 presidential candidate Rand Paul took a shot at the media during a Wednesday campaign appearance in Milford, New Hampshire. An unidentified reporter asked the Kentucky senator about a recent interview he did with the Associated Press that centered on the controversial issue of abortion. Paul replied, "Why don't we ask the DNC: Is it OK to kill a 7-pound baby in the uterus?"

The Republican politician also specifically targeted the head of the DNC: "You go back and go ask Debbie Wasserman Schultz if she's OK with killing a 7-pound baby that's just not born yet. Ask her when life begins, and ask Debbie when she's willing to protect life. When you get an answer from Debbie, come back to me."

The AP's Philip Elliott reported on Senator Paul's blast at the media in his Wednesday write-up on the interview. The correspondent led his item, "AP Interview: Paul won't spell out abortion ban exceptions," by underlining that "Paul, a newly declared Republican presidential candidate, is dodging a central question about abortion: What exceptions, if any, should be made if the procedure were to be banned?"

Elliott continued by outlining the Republican candidate's answers from the interview:

In an interview with The Associated Press on Wednesday, Paul would not say where, in his view, a pregnant woman's rights begin and those of the fetus end.

"The thing is about abortion — and about a lot of things — is that I think people get tied up in all these details of, sort of, you're this or this or that, or you're hard and fast (on) one thing or the other," Paul said.

In the past, Paul has supported legislation that would ban abortion except in cases of rape or incest or to save the mother's life. At other times, he has backed bills seeking a broader abortion ban without those exceptions.

Campaigning in New Hampshire on Wednesday, Paul told the AP that people get too tied up in these details and it's his conviction that "life is special and deserves protection."...

Paul has said previously the issue is too divisive to expect changes in federal abortion law. That has led some religious conservatives to raise questions about his commitment to their cause despite a voting record in their favor.

The AP journalist also played up that "exceptions in any abortion ban are a politically sensitive topic for Paul and some of his rivals. They want to nudge the party away from a focus on such social issues, but know that winning the nomination requires some backing from religious conservatives who press for strict, if not absolute limits on abortion." Elliott included a quote from a pastor in Iowa who "saw no place for equivocation on the issue."

Later in his article, the correspondent underlined that "abortion policy is a central issue in Republican politics. On Tuesday, Kansas became the first state to ban a common second-trimester abortion procedure that critics describe as dismembering a fetus." "Critics describe"? It's not just the critics who acknowledge this fact. On Tuesday, the New York Times disclosed what is done during the "procedure" in question:

The law does not use medical terminology, and its practical impact is uncertain, some experts said. But it appears to ban or require alteration of the method known as dilation and evacuation, which is used in nearly all abortions after the 12th to 14th week of pregnancy and is seen by many doctors as the safest and most convenient technique for most women. In the procedure, the cervix is dilated with medication and the fetus is removed with forceps, often in parts.

Elliott also included more details from the interview towards the end of his write-up:

In the AP interview, Paul said his test is whether abortion legislation protects life.

He added, "I've supported both bills with and without (exceptions), you know. In general, I am pro-life. So I will support legislation that advances and shows that life is special and deserves protection."...

Polls show that a vast majority of Americans believe abortion should be legal is cases of rape, incest and to protect the life of the mother. Support for exceptions has not been disqualifying in recent Republican presidential primaries....

An eye surgeon by training, Paul said he often examines newborns, some as light as a pound, in neonatal nurseries. Yet a fetus, even weighing more in the womb than a premature baby, is considered to have lesser or no legal rights, he said.

"Nobody really, sort of, questions whether they have rights," Paul said. "They're there, and if you do something to the baby or try to harm a baby in the neonatal nursery, that's murder. Because everyone is in agreement that the baby is alive."

It should be pointed out that Gallup's polling on abortion between 1996 and 2012 has consistently found that only about a quarter of Americans believe that abortion should be legal during the second trimester of pregnancy.