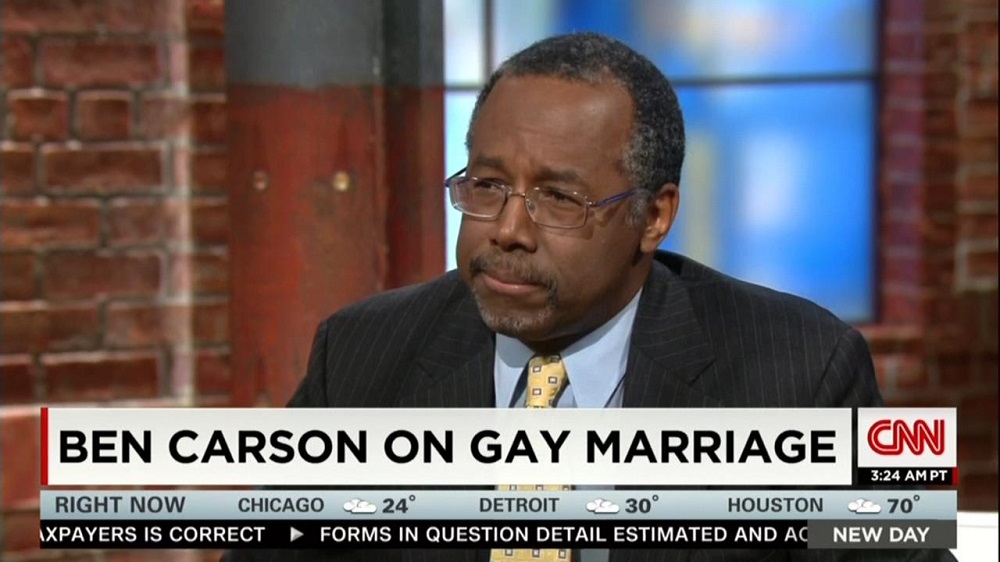 On Wednesday's New Day, CNN's Chris Cuomo likened traditional marriage legislation to legalizing slavery as he interviewed Dr. Ben Carson. When the conservative personality suggested, on the issue of same-sex "marriage," that "civil issues of that nature should be determined at the state level," Cuomo retorted, "What if people of a state vote for a law...that winds up infringing on the rights of a minority – like happened very often with slavery; like, many would argue, is happening now with people who are gay?"

The anchor acted as a left-wing activist on the subject, as he has done in the past, as he and Dr. Carson sparred for the remainder of the interview segment: [video below]

DR. BEN CARSON, AUTHOR, "ONE NATION": And our Constitution was followed, and we corrected those things.

CUOMO: And isn't that what's happening right now with same-sex marriage? It's being corrected as a form of violation of equal protection.

CARSON: Because people have no control over their race, for instance.

CUOMO: You think they have control over their sexuality?

CUOMO: You think being gay is a choice?

CUOMO: Why do you say that?

CARSON: Because a lot of people who go into prison – go into prison straight – and when they come out, they're gay. So did something happen while they were in there? Ask yourself that question-

CUOMO: Most gays never go to prison, and you know there's a whole theory of dominance-

CARSON: I said – wait a minute. I said a lot of people who go in come out – are you denying that that's true?

CARSON: Okay, but if, in fact – if, in fact, that is the case, then it obviously thwarts what you just said.

CUOMO: A lot of people go into jail as a drug addict, and they come as out a criminal. Does that mean that all drug addicts are criminals?

CARSON: But here's – here's what's important: why do gay people want to get married? Because they want to have various rights – property rights, visitation rights-

CUOMO: No, they want – that's right. They want their commitment to count just like mine and my wife's?

CARSON: Why – why can't any two human beings – I don't care what their sexual orientation is – why can't they have the legal right to do those things?

CUOMO: That's what they're fighting for.

CARSON: Okay. That does not require changing the definition of marriage.

CARSON: I don't think so.

CUOMO: Well, that's what's working its way through the courts right now. Dr. Ben Carson, good luck to you going forward, and thank you for answering the questions about the issues of the day.

Cuomo had introduced the issue by asserting that "same-sex marriage: you have equal protection. It's working its way through the courts. The decisions are getting more and more uniform. But then, you have people of faith who say marriage is ours. God says it is a man and a woman. The Bible says; my faith says – which one wins with Dr. Carson?" Dr. Carson replied, "I would do what the Constitution says. The Constitution says civil issues of that nature should be determined at the state level. Why does it say that? Because the judicial system at the state level has to answer to the people."

The CNN anchor's liberal bias came out earlier in the segment as well, as he raised the issue of ISIS's rampage through Syria and Iraq:

CUOMO: ISIS – would you put U.S. troops on the ground? You see what's happening with the military affairs there. The bombings are only doing so much. It's all about what happens on the ground....The best fighters – the men and women who do it best in the world – are not engaged; and those are U.S. fighters. Would you make that commitment?

CARSON: Well, one of the things you have to understand about the radical Islamic terrorist mindset is that for them, land is a prize. And you know, they've managed to acquire quite a bit of land – including land that we had taken that was under our control. They don't care if you bomb the land as long as they possess it. In order to possess land, you have to have troops. You have to put troops on the ground. That's what's going to really affect them. So, yes, if I needed to put troops on the ground, I would put them there.

CARSON: Sure. But I think a lot of that is because no one has really spent the time to explain to the American people that this is very different than al Qaeda ten or fifteen years ago. What we're dealing with here is something that, if allowed to grow and to spread, will be a threat not only to Israel; not only to America; but to the entire world. I don't think we've had that conversation with the American people at the level where it should be had.

Actually, the American public is split, according to his network's own poll from mid-February 2015 – 47 % back the use of U.S. ground forces, while 50% oppose it.

Cuomo also went after his guest for his current stance on ObamaCare, and indicated that he flip-flopped on the issue. He also played up Carson's apparent gaffes in the past:

CUOMO: You've had your missteps politically. You say things that wind up getting people upset. Sometimes you say, 'Well, that's the P.C. police.' But politics can be very tricky. Do you think that you can speak your mind and be successful?

CARSON: Well, I've had a great deal of experience with that in the last year or so. And you probably noticed that I have toned it down a bit, recognizing – not that what I was saying was necessarily incorrect, but that it was said in a way that would cause people to focus on the words, and not on what you're saying.

CUOMO: Well, that's how it goes, though, right? It's how you say it, not just what you mean.

CARSON: And that – there is a learning process, and I think I've – I feel pretty confident about that now.

CUOMO: So we look at the domestic landscape. A big issue that you understand very well from the practitioner side is health care. When you talk about the ACA now – when you talk about ObamaCare, you say it's the worst thing since slavery – very hyperbolic, right? You want to be as negative as possible. Isn't that different from what you wrote a paper about so long ago in the '90s, where you should we shouldn't even need medical insurance companies any more; that we should have a fund so that the poor people can get what they need? It sounded a lot like the ideas that are at the foundation of the Affordable Care Act.

CARSON: It was certainly more similar to it, and I've abandoned those ideals. I've learned – I've talked to a lot of people; read a lot of material; and I recognize that the medical system that will work the best is one in which the care is in the hands of the patient and the health care provider.