Ex-CNNer Sesno: O'Reilly Allegation Nowhere 'Near on That Scale' of Williams 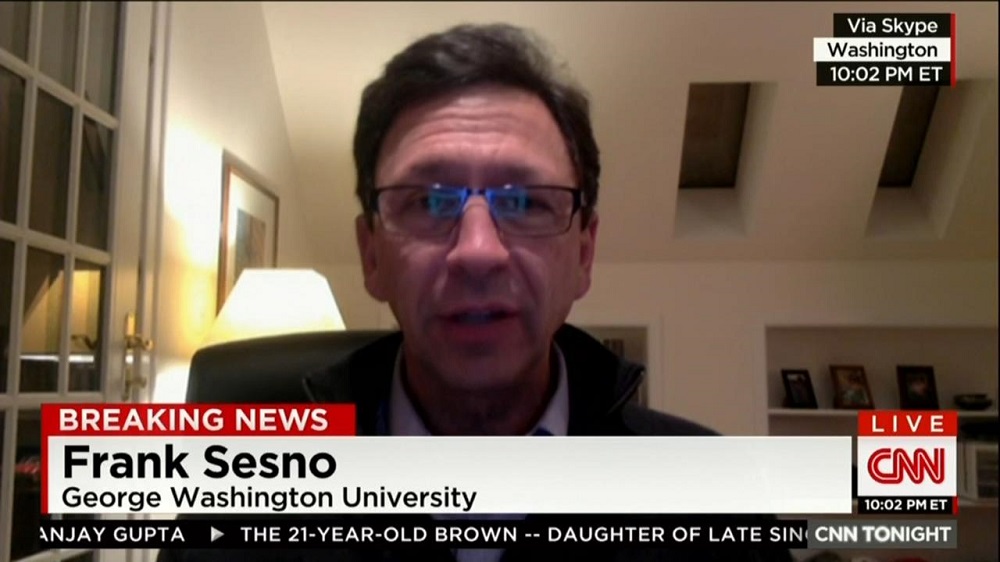 On Thursday's CNN Tonight, former CNN correspondent Frank Sesno brushed aside David Corn's supposed expose of Bill O'Reilly's claims about his reporting of the Falkland War: "It's not a Brian Williams problem. I don't think it's anywhere near on that scale." Sesno contended that "these are a series of issues that are...thirty-plus years old, certainly. Brian Williams...got in trouble over issues that are current and immediate, and on the air with him." [video below]

The guest, who is now a professor at George Washington University, later conceded that O'Reilly's statements on covering the 1982 war "can be scrutinized," but added, "I just don't think that this is on a par...[with] the issues, the exaggerations, and the trouble that Brian Williams is in."

Anchor Don Lemon led the hour-long program with the "breaking news" about Mother Jones's O'Reilly story. Lemon never pointed out the left-wing politics of the publication. Instead, at the beginning of the segment, he stated that "Mother Jones, the publication that reported on Mitt Romney's '47 percent' comment which deeply damaged his presidential campaign, is reporting tonight that there are questions about Bill O'Reilly of Fox News – that statements he has made about reporting from a war zone cannot be substantiated."

The anchor then turned to Sesno (who also covered the Falklands conflict) and correspondent Brian Stelter, and read an excerpt from Mother Jones writer David Corn's article: "It says, 'For years, O'Reilly has recounted dramatic stories about his own war reporting that don't withstand scrutiny – even claiming he acted heroically in a war zone that he apparently never set foot in.' And that was for CBS." Stelter responded by likening the Fox News host to Williams in one respect:

BRIAN STELTER: This started with Brian Williams two weeks ago – right, Don? And I wondered at the time, were we going to see other television news stars subjected to the same level of scrutiny that Brian Williams has been subjected to? Well now, the answer is yes, and it's Bill O'Reilly, who is the Brian Williams of cable news. And what I mean by that is he's the number-one – you know, rated news anchor or opinion anchor – call him whatever you want – on cable news in the United States. He has a bigger audience than anybody else on cable news. So he is the biggest, in some ways, target; and the most important, in some ways – deserving of scrutiny.

The CNN correspondent continued by asserting that "this story is significant, because it is pointing discrepancies in his descriptions of this war story." Both Stelter and Lemon also spotlighted O'Reilly's strong reaction to the Mother Jones story:

STELTER: ...He [O'Reilly] has said tonight, in a series of interviews with outlets like the Washington Post and TVNewser and Mediaite, that – he calls the Mother Jones story a lie. He calls the reporter a 'gutter-snipe liar'-

STELTER: A 'disgusting piece of garbage' – we could go on and on and on. Meanwhile, Mother Jones is saying, just look at the actual evidence here – don't make this a he said/he said – look at the evidence here: over time, in his books and on television, Bill O'Reilly talked about being in a combat zone. But the closest he actually got to that combat zone was in Argentina – not in the Falkland Islands, where no reporters were able to be-

LEMON: It was a riot, right?

STELTER: That's right. So your definition of 'war zone' is part of the issue here. You know, as David Corn, the Mother Jones reporter, said to me on the phone a few minutes ago – he said it's as if you say you were in D.C. covering a Vietnam War protest, and then claiming you were in Vietnam. That's how they say this is.

Lemon then turned to Sesno, who, in addition to his "not a Brian Williams" line, underlined the difference between the NBC anchor and Fox News personality:

FRANK SESNO, GEORGE WASHINGTON UNIVERSITY: Well, I think it's very interesting. The first thing, though, I would say is, it's not a Brian Williams problem. I don't think it's anywhere near on that scale. While Brian is quite right – O'Reilly is the biggest guy in cable television – he's not the Brian Williams of NBC. Brian Williams does a news show; O'Reilly does an all-O'Reilly opinion show. These are a series of issues that are 35 years old now – or thirty-plus years old, certainly. Brian Williams, where it – was – got in trouble over issues that are current and immediate, and on the air with him

The George Washington University professor stuck to his argument when Lemon followed up by slanting towards Mother Jones:

SESNO: Well, I totally agree. I think Brian is dead right about this: everybody is fair game now. Anybody who's had a public statement on television or anyone elsewhere, it's going to be scrutinized. O'Reilly was scrutinized. There do appear to be inconsistencies in what he said in various places – although I heard him on one piece of tape saying, I covered the war from Argentina – from Buenos Aires – and from Montevideo, which is Uruguay.

As you mentioned, I was down there. I was there the entire time – or virtually the entire time of the conflict. We never got anywhere near it. I mean, I covered the war from Buenos Aires. There were demonstrations. There were some of the disturbances that he talked about. I never saw troops open fire in a big way on crowds.

So, this can be scrutinized, Don, but I just don't think that this is on a par of the – the issues, the exaggerations, and the trouble that Brian Williams is in.