NYT's Bruni: Anti-Vaccine Cause is the Left's Version of Climate Change Denial 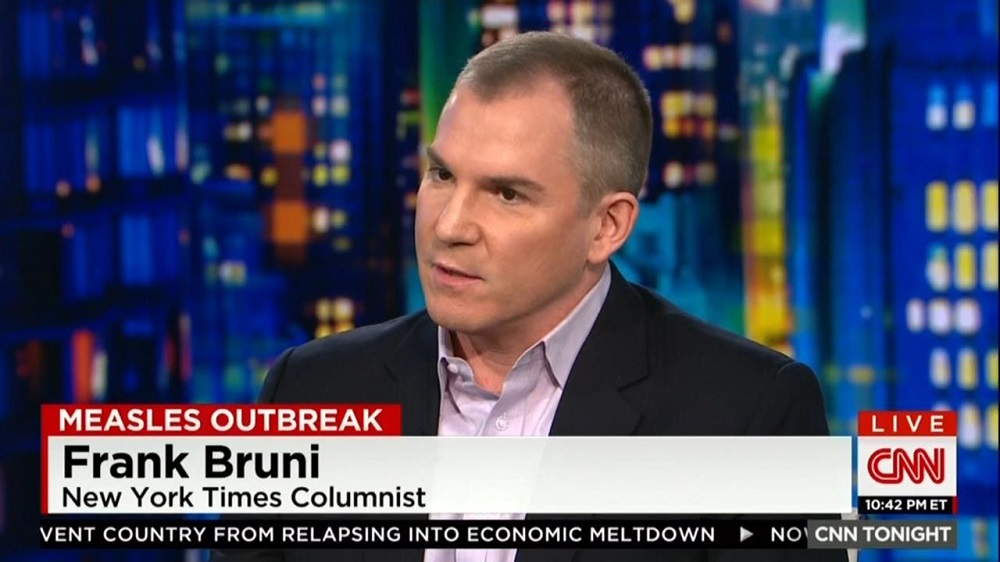 As many on the left rush to pin the anti-vaccine movement on conservatives, liberal New York Times columnist Frank Bruni pointed out on Monday's CNN Tonight that the cause is actually more prevalent on the left side of the political spectrum: "I think a lot of the anti-vaccine people probably would hate to hear themselves lumped in with the climate change deniers. But they're doing the same thing from different places on the political spectrum." [video below]

Anchor Don Lemon brought up Bruni's January 31, 2015 column where he slammed the anti-vaccine cause:

DON LEMON: You write about this in an op-ed. It's called, 'The Vaccine Lunacy' – okay? You said, 'But what's in play is more than one – one affliction' – right? 'One affliction resurgence – the size and the sway of the anti-vaccine movement reflect a chilling disregard for science – or at least a pick-and-choose cafeteria approach to it. That's also evident, for example, in many Americans' refusal to recognize climate change.'

Bruni didn't use ideological labels in his reply, but made it clear that he was targeting well-to-do liberals in his piece:

FRANK BRUNI, NEW YORK TIMES COLUMNIST: Yeah. You mentioned this – which is interesting – I think a lot of the anti-vaccine people probably would hate to hear themselves lumped in with the climate change deniers. But they're doing the same thing from different places on the political spectrum. They're basically saying, when my gut or when what I want to believe is different from science, I'm going to go with my gut and what I want to believe over science-

BRUNI: And I think it happens across a spectrum of issues. I think it's a problem.

BRUNI: Some of them are-

BRUNI: But I mean – I think 'learned' is a term that can work in a lot of ways. They may be packed full of a lot of information. They may not be that bright about the way they process it-