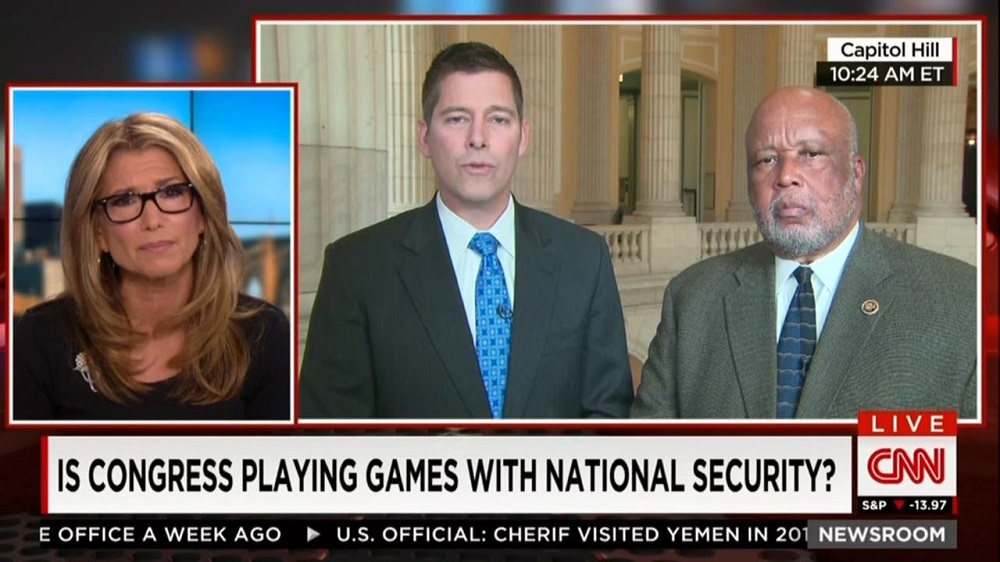 Carol Costello badgered Rep. Sean Duffy on Wednesday's CNN Newsroom over House Republicans' attempt to defund President Obama's executive action granting amnesty to millions of illegal immigrants: "The Department of Homeland Security protects the United States from terrorist attacks. Some Senate Republicans – among them, Lindsey Graham – say the strategy should be revised in light of what happened in Paris. So at this moment in time, why mess with that department?"

The Wisconsin Republican struck back by using Costello's own advice from an October 2013 segment that he did with the anchor. He also cited CNN's own poll numbers on the President's controversial move: [video below]

REP. SEAN DUFFY, (R), MEMBER, HOUSE BUDGET COMMITTEE: Carol, remember during the shutdown a year and a half ago, you talked about the power of the purse. Don't use funding of the government – you said use the power of the purse in these fights. And per your own prior questions to me, we're using the power of the purse to say, let's defend the homeland – but to think that you're going to come to Congress and say, I didn't include you in this executive amnesty, but I want you to fund it? The President is out to lunch thinking that we're going to do that, and if he wants to hold the security of the U.S. hostage for executive amnesty – which, I would argue, is unconstitutional...he's not on the side of the American people. Your own poll at CNN says that the American people agree with us – that the President should go through the Congress, the duly elected representatives of our states and our districts to get this done the right way.

It should be pointed out that a week after that first segment, Rep. Duffy rebuked NBC's Andrea Mitchell about the liberal media's slanted coverage of ObamaCare: "The media won't even ask the question about, 'Why are you [the Obama administration] treating families different than big businesses?'...That's how pathetic, I think, news reporting has become, when we won't ask tough questions to the administration."

The journalist led the segment with the Republican politician and Democratic Congressman Benny Thompson with her "why mess with that department" question. Rep. Duffy replied by correcting her: "Well, we're not going to...We're going to fund Homeland Security – fully fund it – but we're going to defund the President's executive action....He didn't get our approval. And so, now that he would come to the Congress and say now, I want you to fund my executive action outside the role of Congress; and if you don't, I'm going to shut down the national security of the United States. It's kind of like I'm going to take my ball and go home unless do you what I want."

By contrast, Costello tossed a softball question to Rep. Thompson:

COSTELLO: Congressman Thompson, do you think that Republicans are tying funding of the Department of Homeland Security to the immigration issue?

REP. BENNY THOMPSON, (D), RANKING MEMBER, HOUSE HOMELAND SECURITY CMTE.:: Well, there's no question about it, Carol. If they were not, we could have passed that bill in December when last Congress was in session. But Homeland Security's budget was held hostage for just a situation as this, and that's unfortunate. Historically, we've had a very bipartisan committee; and now, this effort to put a pause on appeal amendments to the Homeland Security bill makes it really difficult for people to support it. And this is what it's not about. It's about protecting the homeland. It's not about executive authority. And it's not even about picking on children who live in this country – who are legitimate. It's about making sure that the homeland is safe.

Rep. Duffy then interjected that "the poison pill was actually the President who did executive amnesty on his own." Costello retorted, "But isn't there another way to fight this than using Homeland Security? The Wisconsin politician shot back with his reference to the anchor's own words from 2013 and his citation of the CNN poll. The journalist merely countered that she was "sure that most Americans would want to fund the Department of Homeland Security at this particular time in history."

The Republican's reply might have made an impact, however, as Costello challenged Rep. Thompson mere moments later:

THOMPSON: And the question is, Carol, why add these egregious amendments to a straight-up Homeland Security bill that all of us support? If you want to do immigration reform, let's bring it in a freestanding manner, and I'm prepared, like other members of Congress, to debate it. There's no question: the President has executive authority to do what he's done. Ronald Reagan has done it; both Bush presidents – all presidents have the authority to issue these executive amendments. So clearly-

COSTELLO: But see, you're saying that. Now, I can understand why Congressman Duffy wants to use the power of the purse, because you have no intention of changing your mind.

THOMPSON: Oh no. It's not changing your mind. It's just the President has the authority to do what he did. Now, if you disagree with it, then pass a bill – freestanding bill – that doesn't have the riders on it.