We’ve often said that Univision is a liberal immigration-advocacy PAC with a broadcast license seeking FCC permission in order to be 100% under foreign control. But perhaps we should consider the possibility that they’re also a bundler for other liberal PACs.

Meet Angélica Artiles. She is Executive Assistant to Daniel Coronell, President of News at Univision. And during business hours, she appears to also go on Facebook and disseminate fundraising asks from the anti-Trump group known as The Lincoln Project. 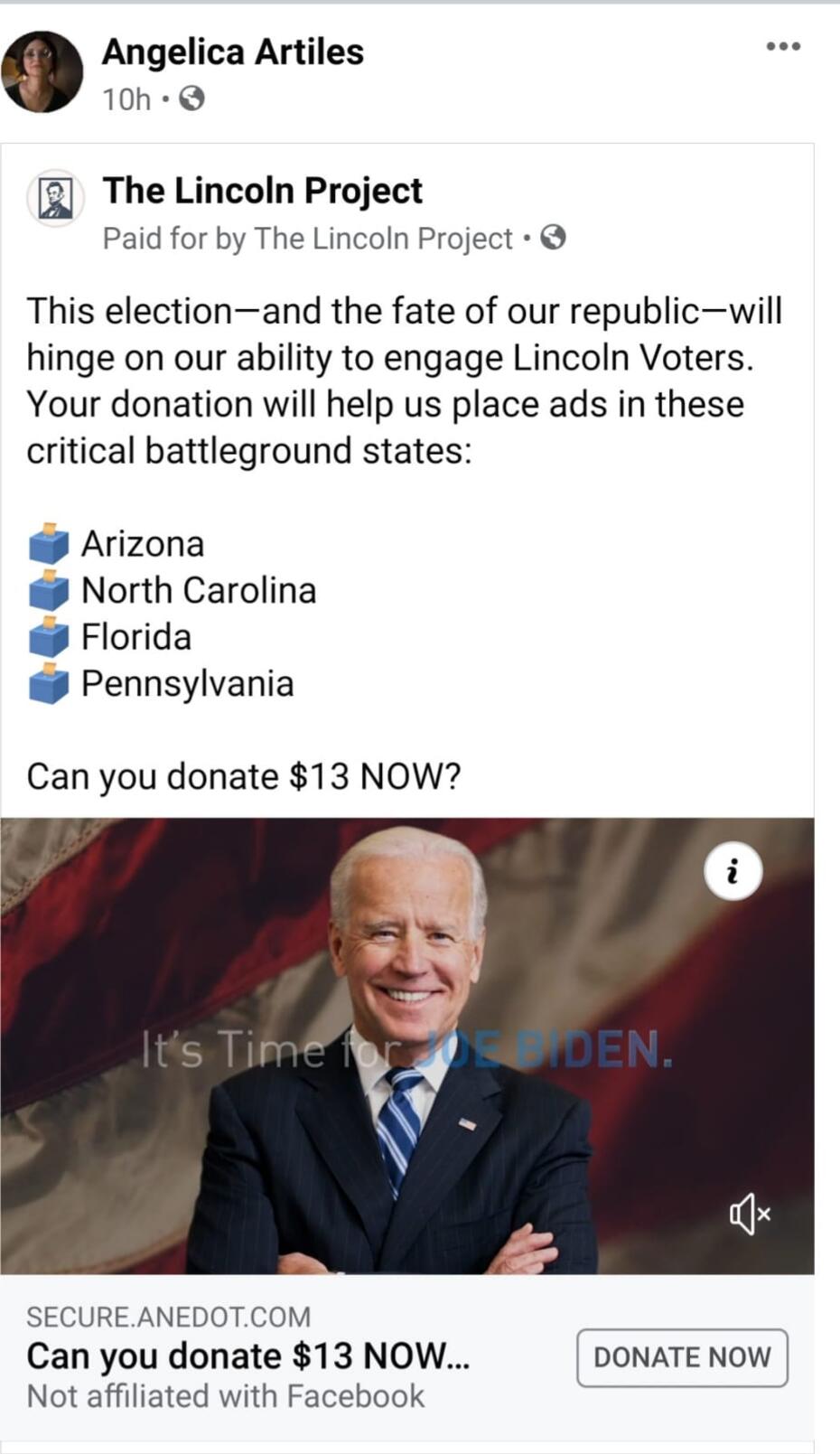 If the name rings a bell, it is because in 2013 she took to Facebook to trash Sen. Marco Rubio. As Marc Caputo (now at Politico) reported while at the Miami Herald:

A top assistant to a Univisión news boss trashed Sen. Marco Rubio on his aide’s Facebook page, calling the Republican lawmaker a “loser” and “a token slave boy.”

It’s the latest attack in a lengthy feud between the Florida senator and the powerful Spanish-language network that conservatives charge is anti-GOP and anti-Rubio.

She then used a diminutive term for Rubio’s first name, “Marquito,” and proceeded to compare him to a Disney dwarf, a “token slave boy” and a “fool” who was passed over by Republican Mitt Romney on his presidential ticket last November.

Burgos stopped responding, but others took up Rubio’s cause and attacked Artiles for being a “troll,” Internet slang for someone who posts inflammatory statements to gin up responses. The conversation went back and forth in English and Spanish.

“I see that all the mojoncitos [‘little turds’] have come out to defend the principal turd, Marquito,” she wrote in Spanish. “I am laughing all the way to the White House :).”

While it may be nice to see Artiles progress from trolling to fundraising, it is nonetheless a reminder that not much has changed at Univision- a network still owned by a Clinton megadonor who in April of 2015 instructed former Univision Chief Content Officer Isaac Lee to meet with Clinton campaign chair John Podesta. As we noted 4 years ago:

On April 12, 2015, Hillary Clinton published her presidential campaign announcement video. Five days later, Univision Executive Chairman and Clinton Foundation megadonor Haim Saban emails both Clinton campaign chair John Podesta and Univision's then-President of News and Fusion CEO Isaac Lee- a follow-up from prior phone conversations- and directs them to contact each other. Lee (set to deliver his infamous "Nazis" talk at UT-Austin the very next day) agrees to meet with Podesta "ASAP", and the two ultimately agree on a breakfast meeting.

When the Trump campaign called Univision a "leftist propaganda machine", Univision responded by saying that they've “covered the electoral campaign and President Donald Trump with honesty and rigorous journalism”, and that "we will continue to meet our commitment and duty of informing the Hispanic community about his policies and his electoral campaign by embracing the truth and the facts.”

Is Artiles' dissemination of a pro-Biden fundraising ask representative of Univision's "honesty and rigorous journalism" towards conservatives or towards Trump? This is a fair question given who Artiles works for- the man in charge of all news operations at Univision. If the executive assistant to the president of news at a major network can openly share a fundraising link for the Democratic presidential candidate, reasonable people can infer that she does so with the sanction of Mr. Coronell, and that this is therefore the corporate culture at Univision's news division.

The millions of Latinos who depend on Univision for their news coverage deserve better than a network that claims to be honest while employees are free to openly bash conservatives and engage in political activities. Given how Univision's news coverage has devolved over the last 5 years, what we see above is proof that the fish indeed rots from the head down.

Click here to read Media Research Center Founder and President L. Brent Bozell III's letter to the FCC, in strong opposition to the proposed rule change that would allow Univision to become 100% foreign-owned.