While both ABC's Good Morning America and CBS This Morning on Monday discussed the ongoing scandal of the Clinton Foundation accepting millions of dollars in foreign donations, NBC's Today not only ignored the story but actually portrayed Hillary Clinton as a victim of Republican attacks.

Co-host Savannah Guthrie warned: "The 2016 presidential race is already intensifying. Democratic frontrunner Hillary Clinton takes her campaign to New Hampshire today, where Republican rivals are already on the attack against her record." In the report that followed, correspondent Andrea Mitchell lamented: "Republicans got here first and they gave her a very unpleasant welcome."

Mitchell declared that the GOP 2016 contenders had "made Clinton their prime target" and that the former secretary of state's lack of specific policy proposals was "fueling criticism from Republicans." However, neither the Clinton Foundation nor e-mail scandals were mentioned.

In contrast, Good Morning America co-host George Stephanopoulos reported on "a new book raising questions about foreign donations to the Clinton Foundation" by Peter Schweizer. White House correspondent Jonathan Karl followed: "...this new book that will be released next month takes a close look at the tens of millions of dollars in donations that the Clinton Foundation received and also the speaking fees that Bill Clinton received while Hillary was Secretary of State. It charges that those donors got favors for those donations."

CBS This Morning failed to mention the upcoming book, but fill-in co-host Jeff Glor did grill left-wing Daily Beast editor Tina Brown on the scandal: "Republican candidate Rand Paul heavily criticized the Clinton Foundation this morning for accepting these donations from some countries which have terrible records on women's rights. Should they return that money?"

Back on Today, Mitchell was too busy reminiscing over Clinton's tactic to win the New Hampshire Democratic primary: "But it was an unscripted moment in New Hampshire in 2008 that helped Clinton connect to voters and win." A clip ran of a tearful Clinton remarking: "I have so many opportunities from this country. I just don't want to see us fall backwards." Mitchell proclaimed: "This time around, voters here are hoping to see more moments like that one."

Wrapping up the puff piece, Mitchell announced: "New Hampshire has been very friendly territory for both Clintons in the past. And while the Republicans are barely organized here, Clinton has already hired a full staff, trying to show New Hampshire voters that she is taking nothing for granted."

GUTHRIE: Let's start with Hillary Clinton. She's essentially running unopposed. Do you think that's a blessing or a curse for her?

PERINO: When you started the show with Andrea Mitchell's segment, she was called "the frontrunner." She's not the frontrunner, she's the only runner on the Democratic side. And a lot of benefit comes with that and also a lot of challenges. She is the only person that all of the Republicans who are running – if they're trying to show a contrast between Republicans and Democrats, she is the only one to show a contrast against.

GUTHRIE: And we already saw over the weekend a bunch of Republican candidates or would-be candidates were up in New Hampshire taking their shots at Hillary. I mean, is that kind of the key question right now for Republicans, who has the juice to take her on?

PERINO: I think that for some Republican voters, yes. But there's a lot of different Republican voters, and they're all across the country, and they're wanting to know a couple of things. Some people might say, "Who can win?" But also, "Who's going to represent me well? Who's going to get the country back on track?" You know, the country's about 75% or so, according to some polls, think the country's on the wrong track. So they're wanting to hear, what are the policies and positions that you'll have?

Plus remember, Savannah, every election, presidential election, is about character, trust, and honesty. I do think that one of the reasons Hillary Clinton decided to go forward in April and announce her candidacy is they saw her numbers in that key area slipping in key states like Ohio, Florida, Colorado, and Iowa.

Here is a full transcript of Mitchell's April 20 report:

SAVANNAH GUTHRIE: Meantime, politics. The 2016 presidential race is already intensifying. Democratic frontrunner Hillary Clinton takes her campaign to New Hampshire today, where Republican rivals are already on the attack against her record. NBC's Andrea Mitchell's in Keene, New Hampshire for us this morning. Hi, Andrea, good morning to you. 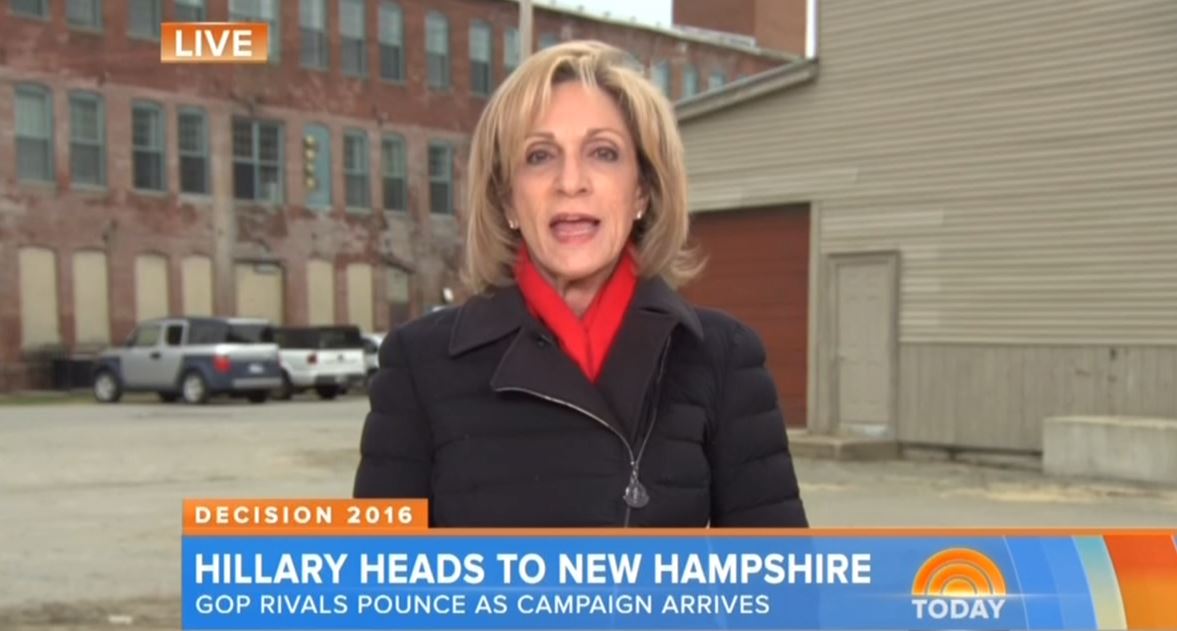 Republicans who were here all weekend made Clinton their prime target.

SEN. RAND PAUL [R-KY]: I'm starting to worry that when Hillary Clinton travels there's going to need to be two planes. One for her and her entourage and one for her baggage.

MITCHELL: This morning, Clinton's first chance to respond. Today she will focus on the economy, specifically small business. Plus, meetings with local and state politicians, as she did in Iowa, photographed there only by the campaign photographer. But so far, few specifics, fueling criticism from Republicans.

STEVE SCHMIDT: She talks about meeting real voters. But in the one instance when she walks into a store where there's an opportunity, in Chipotle, to actually talk to voters, remains in silence and disguise behind dark glasses.

MITCHELL: But it was an unscripted moment in New Hampshire in 2008 that helped Clinton connect to voters and win.

HILLARY CLINTON: I have so many opportunities from this country. I just don't want to see us fall backwards.

MITCHELL: This time around, voters here are hoping to see more moments like that one.

UNIDENTIFIED WOMAN [NEW HAMPSHIRE VOTER]: I think she's starting right this time. I think she should work on being more relaxed, more open, listening to people.

MITCHELL: New Hampshire has been very friendly territory for both Clintons in the past. And while the Republicans are barely organized here, Clinton has already hired a full staff, trying to show New Hampshire voters that she is taking nothing for granted. Savannah.

GUTHRIE: Andrea Mitchell in New Hampshire for us, thank you.