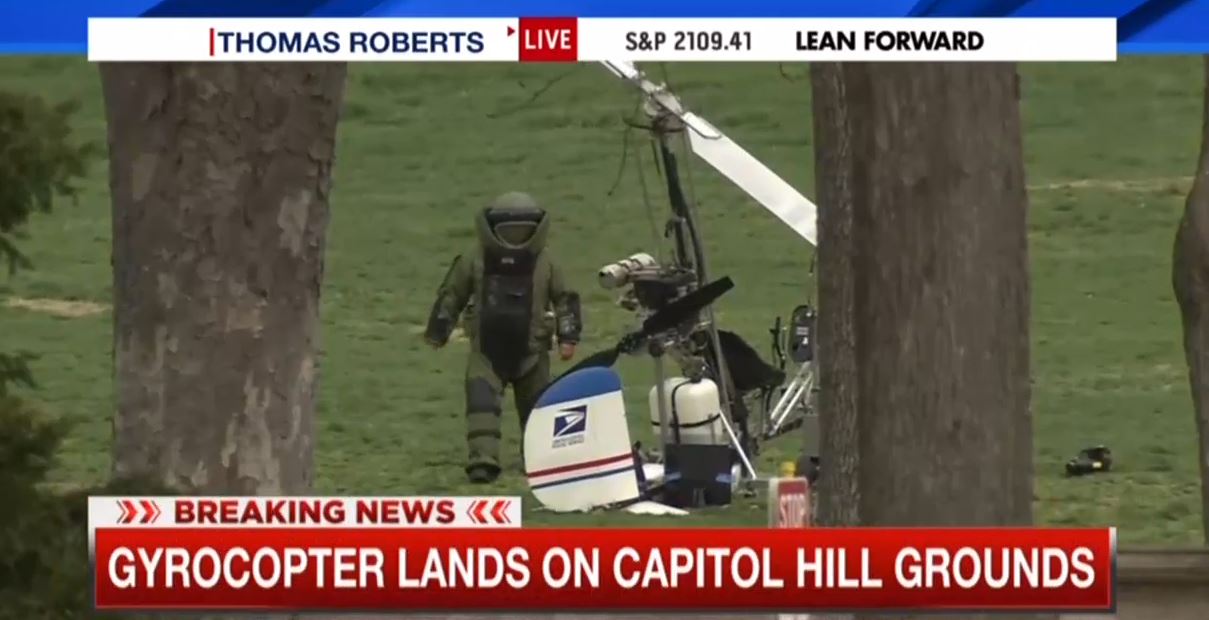 Before disgruntled mailman Doug Hughes violated Washington D.C. airspace by landing his one-man gyrocopter on the grounds of the U.S. Capitol on Wednesday, he sat down for a lengthy interview with the Tampa Bay Times and described in detail his plan to perform the dangerous stunt.

The article, along with a promotional video of Hughes showing off his piloting skills, was published at 12:11 p.m. ET on Wednesday, just one hour prior to the campaign finance reform activist causing a major security breach in the nation's capital.

Hughes, who sees himself as a sort of showman patriot, a mix of Paul Revere and P.T. Barnum, put his plan into action....He bought a burner cell phone and a video camera, and tested a livestream video feed from his gyrocopter....He bought $250 worth of stamps and stuffed 535 two-page letters into 535 envelopes, each addressed to a specific member of Congress: "I'm demanding reform and declaring a voter's rebellion in a manner consistent with Jefferson's description of rights in the Declaration of Independence," he wrote in his letters....Late last week, he loaded the gyrocopter onto a trailer and headed for an undisclosed location outside the nation's capital.

Montgomery revealed how Hughes – living in Ruskin, Florida just outside Tampa – "wanted someone to tell his story in the event he was hurt or arrested" and "sought out a Tampa Bay Times reporter and explained his plan and motivation."

The article went on to promote Hughes's liberal agenda:

Hughes is a slender, soft-spoken, pedantic man, with thinning gray hair and hearing aids. He has no criminal record and it's rare to hear him curse. But he says he needs the show, the very dramatic public act of civil disobedience, to hijack the news cycle and focus the nation's attention on a topic that in most quarters makes eyes glaze over: campaign finance reform. Money, he says, has corrupted the democracy.

At the root of Hughes' disdain is the Supreme Court's 2010 decision in Citizens United v. Federal Election Commission, in which the court decided campaign contributions were a form of "political speech" and struck down limits on how much corporations and unions could give to political contenders. The decision changed the game. Campaign spending went through the roof. In Hughes' mind, there was a parallel spike in favor-dealing and the government is now practically owned by the rich. Hughes likes to point out that nearly half the retiring members of Congress from 1998 to 2004 got jobs as lobbyists earning some 14 times their congressional salaries.

An update to the story at 1:50 p.m. noted Hughes winning a supporter on the Hill: "Richard Burns, 27, who said he works for a marijuana lobby group in Washington, stood in wonder and solidarity. 'I don't know whatever it was he was doing but I support him.'"