Brokaw: If GOP Wins Senate, 'What Are They Prepared to Give to the Democrats?'

Brokaw complained to fill-in host Peter Alexander: "Things have not been done in the last couple of years, in part, because both parties have staked out positions at either end of the spectrum and refused to meet in the middle." However, Brokaw never wondered what Democrats were "prepared to give" to Republicans.

Moments later, Brokaw sought to preemptively blame potential GOP presidential candidates currently in the Senate for things not getting done in Washington in the next two years:

Now the problem is that Wednesday morning, Ted Cruz and others like him – Mario Rubio [sic] and all the people that you've been talking to, Rand Paul – they're going to start running for the White House, immediately on Wednesday morning. And they're not going to be looking at the Senate to get something done. They're going to be out there saying, "I'm the guy who can run the country."

Here is a transcript of the November 3 exchange:

PETER ALEXANDER: Republicans and Democrats are deadlocked in ten Senate races heading into tomorrow's elections. But one thing is clear, voters are fed up with Washington and the dysfunction in government. So is there any hope of that changing depending on which way the Senate swings? Here with some of his perspective is NBC News special correspondent Tom Brokaw, who is joining me from New York today. Tom, always nice to see you. Thanks for your time.

ALEXANDER: So give us a sense, if you can. Voters are angry, they're disappointed, they are frustrated. So walk us through what Americans are thinking right now. 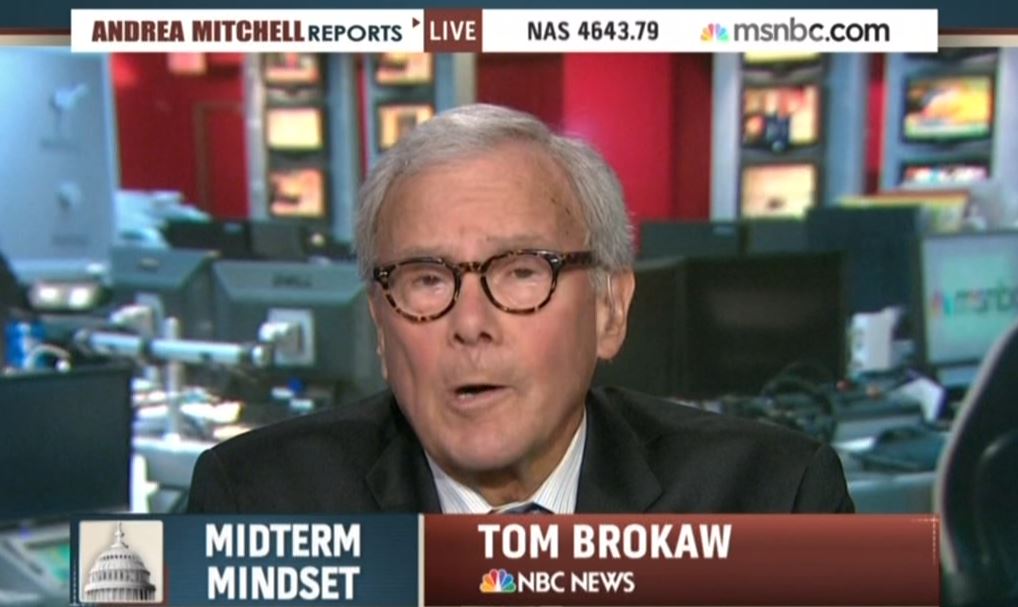 BROKAW: Well, they're thinking that they'd like to have Washington get something done. And the question is not just which party can get it done, but how can they change the tone in Washington so they can work together?

I was listening to Governor Haley Barbour a moment ago, no one is shrewder in the Republican Party than Haley. Last week, Senator Portman from Ohio was talking about the agenda for the Republicans if they gain control of the Senate. The question then is, what are they prepared to give to the Democrats to meet them in the middle ground? What are they going to do about immigration? What are they going to do about the minimum wage?

Things have not been done in the last couple of years, in part, because both parties have staked out positions at either end of the spectrum and refused to meet in the middle. That's the question, I think, that the country is really fed up with.

As you go around America, city councils in Seattle and Los Angeles and Atlanta are getting things done because they work together. It doesn't happen in Washington.

ALEXANDER: So the question is how do things change? How do you get things done right now? And is there any reason for more hope that that'll happen with a president who has to deal with a Congress that's now led by a different party, if things go that direction?

BROKAW: Well, it's not just the President having to deal with a party, but it's also the people who are congressional leaders have to talk about this. You look at Harry Reid and Mitch McConnell, even within their two parties, people are saying, "Oh, my God, I don't know how we can get anything done with those two guys as the leaders."

I actually heard a very important Republican operative said, "My best hope would be that Mitch McConnell loses and we still gain control of the Senate." That's how toxic it is within the party itself in the Republican side. On the Democratic side, we all know that no one's standing beside Barack Obama at this point. He is a very fat opportunity for the Republican Party. So those are the issues that we have to get beyond.

Now the problem is that Wednesday morning, Ted Cruz and others like him – Mario Rubio [sic] and all the people that you've been talking to, Rand Paul – they're going to start running for the White House, immediately on Wednesday morning. And they're not going to be looking at the Senate to get something done. They're going to be out there saying, "I'm the guy who can run the country."

ALEXANDER: The bottom line is, at least according to our polling, that for all the talk about ISIS and Ebola most recently, certainly Russia and Ukraine, it's really still the economy again, stupid. Isn't it? That's what voters are thinking about.

BROKAW: It is the economy, and with good reason. The middle class is not gaining any traction whatsoever, the economy then becomes a metaphor, if you will, for Washington not able to help people where they need help. As you go around the country and listen to these voters – Chuck Todd on the road last week and your own reporting from out there – you know that they land on the economy because that is a big umbrella that covers so many things, as part of the American dream. And if that's not working, the American dream doesn't work. So they're ready to blame anyone and they're ready to change horses now, it appears, it does appear that [way]. We don't know until tomorrow evening at some point. So that they can see if they can get something done. This is about voting against something more than voting for something.

ALEXANDER: As Dan Balz wrote this weekend, an election about rejection, he wrote in The Washington Post. I guess final question for you, President Obama may have wrapped up the final campaign of his – well, he'll certainly have campaigns in the future, but perhaps of this presidency. Right now, should he have done more? Should we have seen more President Obama or were his hands simply tied?

BROKAW: Oh, I don't think that – I don't think he could have done much more in this cycle, frankly. And we have to go back and look at George Bush 43 at this stage in his presidency. Hank Paulson was trying to put it together TARP and bail out the economy, which was sliding into a very deep recession. I know for a fact that President Bush went to Hank Paulson and said, "I'd like to help you, but I'd do more damage than good."

So this is not good for the country at that point, if you have the chief executive of the country who is powerless in the final two years. And this president, his presidency will be defined not just by what happens tomorrow, but what happens with ISIS, for example. And they do not have any victories recently. So he's eager to get that done.

ALEXANDER: The challenge for the President too often seeming like he's been defined by events than defining them for himself. Tom Brokaw, always nice to see you. We'll see much more of you over the course of the next 24 hours.