Are 1 in 5 undergrad college-age women raped in the USA, as feminists, the media and even the White House says? Not so much.

A new report, ironically from the White House’s own Department of Justice, reveals that number is significantly lower than the media and the administration had reported previously.

Instead of a whopping 20 percent of female college freshmen and sophomores, the new, more expansive stats put that number at just 0.61 percent – or 6.1 per 1,000 students.

Even more ironic, the study found that college females are less likely to be sexually assaulted than their unenrolled female peers. These findings are a serious blow to the feminist left’s assertion that an “epidemic” of rape grips college campuses. This, combined with the fast-unraveling Rolling Stone story about the University of Virginia and Lena Dunham’s questionable (to put it kindly) allegation against “Barry One” at Oberlin College, makes it a very bad month for the rape panic industry.

And 2014 had started so promising, too. President Obama launched the “White House Task Force to Protect Students From Sexual Assault,” which he and Vice President Biden subsequently promoted several times throughout the year, always citing the misleading 1 in 5 stat. Celebrities even appeared in a PSA campaign called “It’s On Us” in September which also cited the statistic. NBC, ABC, CBS, CNN and PBS all have run the misleading stats in recent broadcasts and it’s been adopted by women’s rights activists all across the country. But where did this number come from?

The oft-cited number comes from just a singular source – a 2007 small-scale study called “The Campus Sexual Assault Study” done by the National Institute of Justice, a division of the Justice Department. The study polled just two universities, over the course of just under three years. Data was gathered through an online survey that took just 15 minutes to complete. The questions asked about things like if they’d been subjected to “forced kissing.” If the answer was, "Yes," the researchers – not the women themselves – qualified that as a sexual assault. The 5,446 undergraduate women who participated were provided a $10 Amazon gift card, as reported by The Washington Examiner.

Despite the obvious flaws in the study, the numbers proved too dramatic for the left and the media to pass up.

Amazingly, even the authors of this study admitted that the media and activists have misused their findings to broadly apply its meaning.  They told Slate: 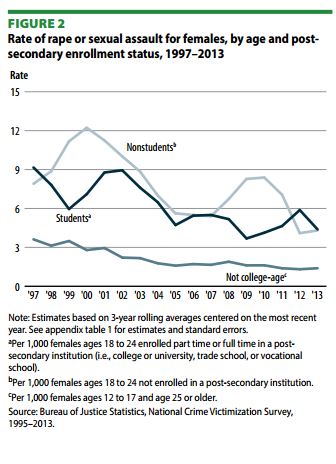 Unlike the 2007 study, the newly released report by the Department of Justice called the “National Crime and Victimization Survey” (NCVS)  gathered data over a much longer time period,1995-2013. Encouragingly, this study finds there has been a downward trend of rape on college campuses since 1997, as The Federalist points out. The NCVS study stated, “For the period 2007-13, the NCVS victimization rate was 4.7 per 1,000 for females ages 18 to 24 who were enrolled in post-secondary schools.”

The study also found that ironically, female college students fare better when it comes to the chance of being sexually assaulted, than their unenrolled peers do. “The rate of rape and sexual assault was 1.2 times higher for nonstudents than for students,” according to the study.

So what will the media do with this new information? If it defeats the left’s favorite statistics and undercuts a fear-mongering agenda it most likely will be ignored.