Imagine a sex scandal centered on a small area, involving decades of abuse, with hundreds of children raped, assaulted and prostituted. Authorities suspected or knew of the crimes but did nothing, preferring to protect the abusers than aid their victims or see justice done.

If that city were in, say, Ireland, and the abusers Catholic priests, the U.S. networks would report it immediately and continuously. And rightly so. But move that city to northern England, and make the perpetrators Muslim men? Don’t look to ABC, NBC or CBS for details. 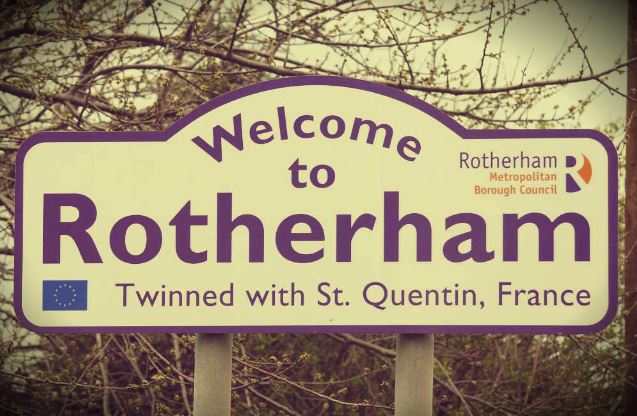 In Rotherham, England, the widespread, systematic sexual abuse of young girls has finally been brought to light. A report published Aug.21, by Professor Alexis Jay, a former Chief Inspector of Social Work in Scotland, found that between 1997 and 2013, more than 1400 young English girls were raped, threatened, and tortured by men in a sex trafficking scandal which is making waves online and in British media but hasn’t made a blip on American news shows.The report shows that Rotherham officials and Council members knew about the abuse for years but did nothing. You see, all but one of these men were Pakistani and Muslim; the girls were white. Britain is even more paralyzed by political correctness and fear of charges of “Islamo-phobia” than the U.S. is. One Rotherham official even admitted he didn’t want to “rock the multicultural boat.” As reward for bringing to light such a heinous scandal, a researcher involved in the case was intimidated, harassed and punished for reporting her findings to the local Council.

U.S. networks face no such consequences. Yet in the two weeks since the story broke in the British media, ABC, NBC and CBS haven’t uttered a word about it on their morning or evening broadcasts.

Could silence be because the networks, like the powers that be in Rotherham, don’t want to touch a story in which the villains are Pakistani and Muslim? Would that be too politically incorrect?

After all, journalists love to cover sex scandals – the more shocking the better. You would think ABC, NBC, and CBS would jump at the opportunity to discuss the horrible details, like they did with the Catholic clergy sex scandal of the last dozen years. According the liberal-leaning Pew Research Forum the U.S. media produced more than 1,500 Church abuse stories in 2010 alone.

So what was more important than this scandal? Well NBC had time to talk about Tom Hanks being an honoree at the upcoming Kennedy Center Awards in December. NBC Nightly News also talked about a dog who ate 43 ½ socks, and reiterated testosterone drugs don’t work. Why any of these stories were considered “news” but Rotherham was not, is baffling. ABC similarly found time on World News Sep. 2 to discuss Angelina Jolie and Brad Pitt’s wedding attire and the celebrity nude photo leak. On Good Morning America Aug.31,  one of the more pressing questions posed, “Does Matthew McConaughey really mow his own lawn?” Yes, that’s really considered “news” on ABC.

And it isn’t as though the networks don’t think sex abuse scandals from across the pond aren’t worth reporting on. When allegations broke in 2012 that the late BBC radio and TV personality Jimmy Savile had serially abused young girls during his career, both NBC and CBS found space in their newscasts. And the 2010 feeding frenzy on Church abuse centered mainly on Germany.

In fact, there was so much media attention paid to the Catholic clergy sex scandal, that the left-leaning Pew Research Center did a study on the media’s fascination with it in 2010. The analysis, from 2010 alone, showed the following:

Pew also found that from Jan. to April 2010, 1559 stories were published in the media on the Catholic clergy sex scandal, just 4.7 percent less than there were in 2002 when the major scandal broke.

Obviously research has shown, the news media will give plenty of time to sex scandals, so why are they turning a blind eye to this one in Rotherham?

It’s apparent that the liberal media has an apparent interest in protecting one class of people and doing everything in their power to demonize another. In this case, the media was only mirroring the politically correct cover-up that occurred at the hands of the Rotherham local government and law enforcement.