Taking umbrage with Alex Wagner's mockery of Lincoln Chafee for announcing he wants to take the U.S. into the metric system if he's elected president, former New York Times ethics columnist Randy Cohen playfully griped on Thursday's Now program that the MSNBC host was practically sounding like a "wing of Fox News," by picking at "something trivial" when there "are more interesting things about him."

For her part, Wagner was taken aback at such an insult, saying, "I don't think anybody's ever accused this show of being a wing of Fox News." Cohen shot back, "that's evidence how far the country has moved to the right!"

ALEX WAGNER: The vice president of the U.S. Metric Association was told that Lincoln Chafee made this proposal, and his response was, who, and then added, oh my gosh. So, is this a bold proposal? Is this what America needs, Randy? 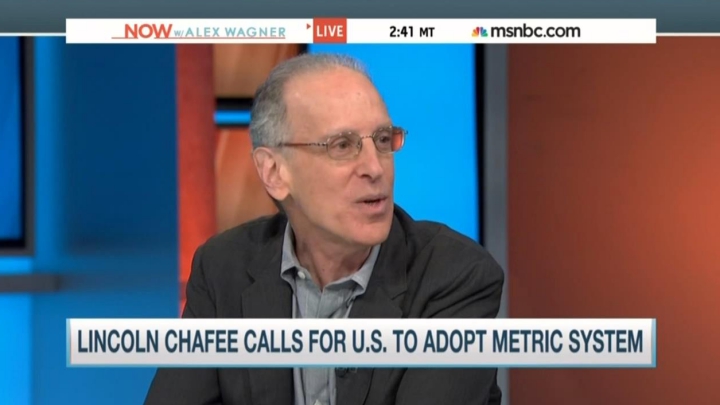 RANDY COHEN: No. But look, well, we should be metric.

WAGNER: Yeah, OK, so this is what I like, is a defense of Lincoln's Chafee's metric idea.

COHEN:  Of course, we should be metric. It's comical because it's a rather small issue in the scheme of things--

COHEN: So it makes it easy to make fun of him, and we want to make fun of him as such a long-shot candidate. But I think there's more interesting things about him. He started out as something called a liberal Republican, and again, explain to the young people what that is, it's like a rotary phone. And then he becomes an independent and then he becomes a Democrat, and what's interesting is he hasn't changed a single policy.

COHEN: I like Lincoln Chafee because he shows how the country has moved so far to the right--

COHEN: -- So, so, he's the Rockefeller Republican we've always wanted to have. And, again, Hillary Clinton has essentially the same politics, except she was for the Iraq War.

WAGNER: The Iraq War. Which is gonna be a problem!

COHEN: And I think that's pretty great, so instead of becoming-- Oh, what are we, a wing of Fox News?! Where let's find something trivial to --  he did one press conference. C'mon!

WAGNER: I, OK, wait a second!   I don't think anybody's ever accused this show of being a wing of Fox News! But I [unintelligible] in that statement.

COHEN:  That's evidence how far the country has moved to the right!

Clearly Cohen is not familiar with the fact that mocking conservative and Republican politicians' trivial foibles, eccentricities, and gaffes is a fair bit of the shtick of Wagner's show. It's just that she's now also turning her dripping sarcasm on liberals who dare challenge Hillary in the Democratic primary.