Milligan: Unfair to Expect Hillary Supporters to Name Her Accomplishments As Secretary of State

U.S. News & World Report's Susan Milligan wildly spun for Democratic presidential frontrunner Hillary Clinton on the May 20 edition of Hardball when she insisted that the fact that her supporters in a recent focus-group survey by Bloomberg TV cannot name a single accomplishment of hers as Secretary of State is, well, "unfair."

Indeed, Milligan insisted, the job of Secretary of State is essentially to make sure nothing major goes wrong on his or her watch. Clearly Susan has never heard of the fiasco that is post-Qadhafi Libya or the ongoing civil war in Syria or the abject failure of the Russia "reset."

For his part, Matthews agreed with Milligan by recalling that "Obama didn't have a big accomplishment before he got elected."

Do these people ever listen to themselves?!

At any rate, here's a transcript of the remarks in context:

CHRIS MATTHEWS, host: What do you make of that? Mama Jama [referring to a woman on the focus group panel who praised Hillary as one]?! [laughs] >>

PERRY BACON, Washington Post reporter: I think that's good. I think they're saying that she's ambitious, she's confident. They're confident in her. I think that's good. People in that question-and-answer also were not sure what was her biggest accomplishment, so I think she does need to add on and say here are the things that I've done already.

MATTHEWS: Hey, Obama didn't have a big accomplishment before he got elected.

BACON: Exactly. You already know what she's for. 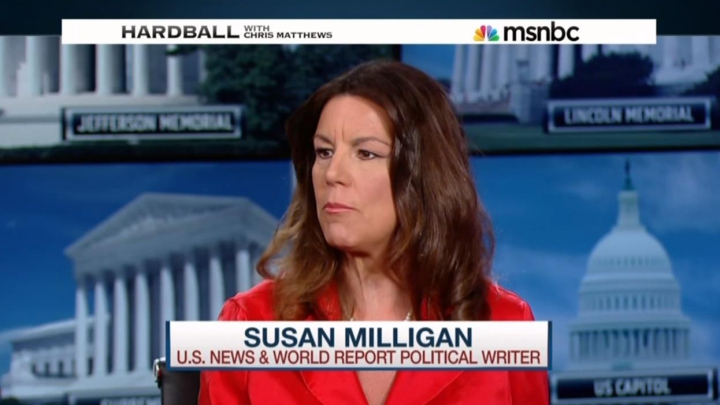 MATTHEWS: I wish she hadn't left it to John Kerry to stand up to Netanyahu, though.

MATTHEWS: A little tougher on him would have been good for the country.