He's at it again.

On his March 5 Hardball program in a segment with Rep. James Clyburn (D-S.C.) about the 50th anniversary of the Selma march for voting rights, Hardball host Chris Matthews slammed as racially-motived GOP efforts for establishing voter ID laws. (watch video below) 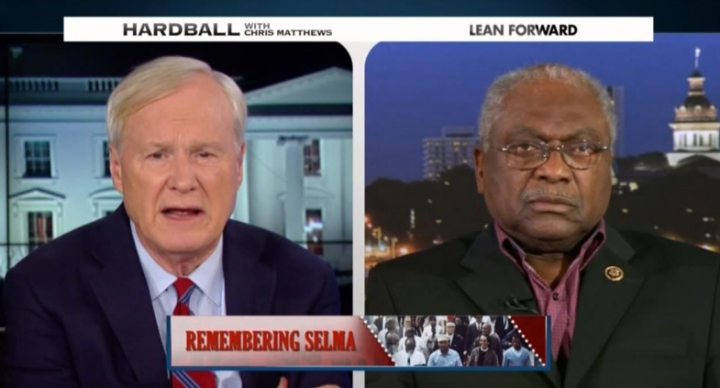 Naturally Matthews made some gross factual errors in his question to Clyburn, insisting that a Pennsylvania Republican legislator was on the record saying voter ID would keep black residents from voting -- he said no such thing -- and that voter ID laws were illegal -- the United States Supreme Court would beg to differ.

Matthews also effectively lied by omission to his audience by making it out as though voter ID pushes are strictly partisan. In fact, an African-American Democratic legislator was the driving force in pushing a voter ID law through the overwhelmingly Democratic legislature of Rhode Island a few years back.

CHRIS MATTHEWS: Well, Congressman, you've been through all this from the hell of the past to what we have today, but, what do you make of these Republicans who even though some of them are going to show up with you as  your colleagues this weekend down in Selma, they're out there pushing all these voter suppression efforts, these voter ID card requirements in states like even Pennsylvania, where you have the leadership of the Republican legislature, which dominates the legislature, openly saying we're doing this to win votes, because we can keep the African-American from voting, especially older people, it's going to help us win statewide elections.

I mean, that seems to me completely in violation of the purpose of the Voting Right Act, this game they're playing about voter I.D. Cards.