It's bad enough that Brian Williams got caught in a lie involving America's military servicemen, but hey, it's not like he lied about meeting the Pope or something right?

In public settings, Williams has also discussed another brush with history that occurred a decade before the fall of the Berlin Wall. As a student at Catholic University, Williams was at the school when Pope John Paul II spoke at the Washington, D.C. campus in 1979. The anchor's account of the papal visit has varied over the years.

In 2002, Williams was quoted as saying that he chipped in with the school's preparations as an employee in the campus public relations office. 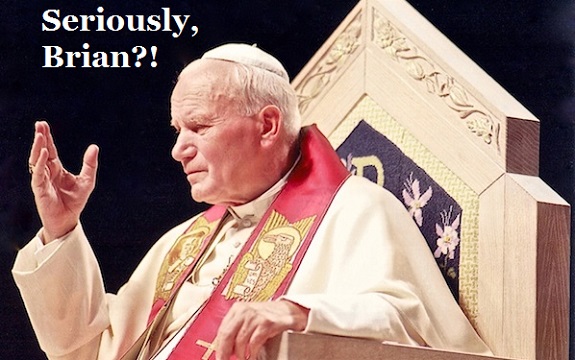 "I was there during the visit of the pope," Williams said.

If he had any interaction with the pope, Williams didn't mention it in then. But that changed in 2004, a year before the death of Pope John Paul II. While delivering the commencement address at Catholic University that year, Williams said the "highlight" of his time at the school "was in this very doorway, shaking hands with the Holy Father during his visit to this campus."

After reporting the news of the pope's death in 2005, Williams said on-air that he was "thinking back to the first time I met him at Catholic University, I guess it's 25 years ago now."

"I have to begin with a beautiful day in 1979," Williams said in an interview published by NBC News. "I was a student at Catholic University, and over the course of two hours, chatted up a Secret Service agent who spilled like a cup of coffee and told me that the pope would be coming our way, straight up the steps of a side door at the National Shrine of the Immaculate Conception. I positioned myself and held out my hand and said, 'Welcome to Catholic University, Holy Father.' And he embraced my hand with both of his, made the sign of the cross, and said a blessing to me."

The same year, he told Esquire he met the pope simply by being in the right place at the right time -- not thanks to a chatty Secret Service agent.

The holes in these accounts may seem small. Up until a week ago, most people wouldn't have given them a second thought. That they're even getting brought up speaks to the depth of this calamity.