Daily Beast: It's 'Draconian' for Court to Allow Most Texas Abortion Clinics to Close

In the mind of the editors at the Daily Beast website, a court ruling which allows the closure of below-code abortion clinics in the state of Texas is draconian.

That's how editors tagged an item in their Cheat Sheet digest this morning entitled "Court to Shut Most TX Abortion Clinics." The item, excerpted in full (emphasis mine):

A federal appeals court gave Texas permission to fully enforce a sweeping abortion law that would effectively close all but seven abortion facilities in America's second-most populous state. Just two years ago, Texas had 41 abortion facilities, but many have already closed under a provision of the law that requires doctors who perform abortions to obtain hospital admitting privileges. This latest ruling means at least a dozen remaining clinics are set to shutter as well. Republican Governor Rick Perry signed the law last year, but in August a lower court blocked requirements of the law that say clinics must meet hospital-level operating standards to stay in business. The appeals court's decision wipes out that fleeting victory for abortion-rights groups. The ruling is only a stay pending a full appeal, but the court wrote that Texas is likely to prevail. If the state does, the clinics would have to make costly upgrades to new standards and reopen.

Pity the poor abortion clinics, having to upgrade their facilities before they can commence killing unborn babies.

1:  of, relating to, or characteristic of Draco or the severe code of laws held to have been framed by him

It most certainly is cruel and severe to take the life of an unborn child. The Athenian lawgiver Draco assigned the death penalty for trivial offenses, whereas an unborn child's only offense is inconvenience to the mother who doesn't want him or her.

What's more, a regime of regulation that tightens the standards of operation for an outpatient surgical clinic -- which is essentially what an abortion clinic happens to be -- is far from cruel or severe. 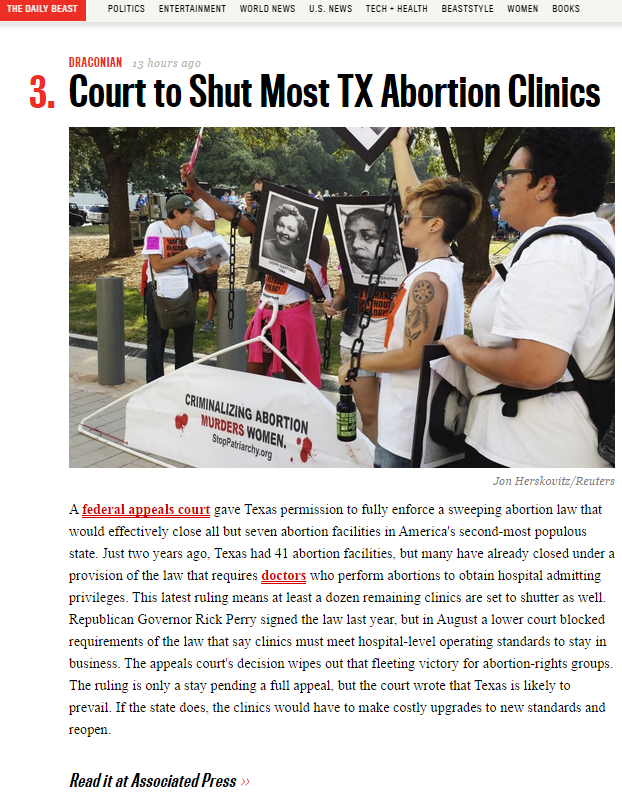