Yesterday in Moore, Oklahoma, a woman was brutally murdered and decapitated by a former coworker, Alton Nolen, who reportedly had repeatedly proselytized folks in the company, urging them to convert to Islam.

But when the liberal Daily Beast picked up the story and teased it in their Cheat Sheet digest, they tagged the incident not as an "outrage" but a "tragedy." What's more they didn't note the potential Islamist dimension to the attack.

Here's how the Daily Beast covered the item, which directed readers to The Oklahoman newspaper for a fuller account:

A woman who was killed in a rampage at an Oklahoma City food-processing facility, Colleen Hufford, 54, was beheaded, law-enforcement officials say. No further details about her death have been released, and neither has the name of a second woman who was also injured. The man who was shot, Alton Noel, 30, was hit by an off-duty Oklahoma County deputy employed by the company. He is accused of stabbing the two women. 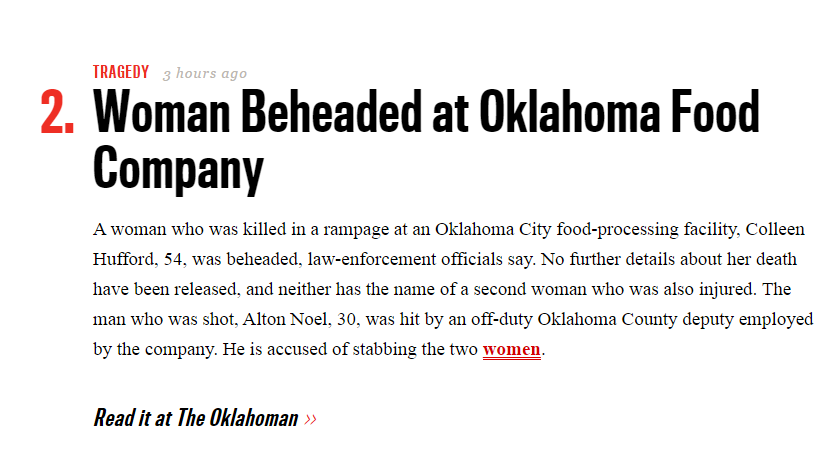 By contrast, the coverage at The Oklahoman newspaper fairly quickly got to the potential religious dimension of the violence  (emphasis mine):

MOORE — A man fired from his job Thursday beheaded one of his coworkers and stabbed another before being shot by a company executive, police said Friday morning.

Colleen Hufford, 54, died Thursday after she was attacked by Alton Nolen, 30, who had just been fired from his job a Vaughan Foods Co., 216 NE 12, police said

Moore police have asked the FBI for assistance in investigating the beheading after employees of the business told police Nolen recently tried to convert coworkers to Islam.

Police Sgt. Jeremy Lewis said at a Friday morning news conference that Nolen had just been fired when he went into the front office and attacked Hufford. Nolen severed Hufford’s head using a knife police said he may have used at his job to cut lettuce and vegetables at the food processing plant.

In fairness, this attack may have less to do with the employee's religious convictions and  more to do with him acting out violently in retribution for being fired. That said, the religious component seems a crucial piece to the story, particularly given the mutilative aspect of the violence. Nolen did not appear content to merely kill his intended victim(s) but to do so in a particularly gruesome fashion, and it's reasonable to assume that may be wrapped up in his persistent attempts at converting coworkers.

We at NewsBusters will monitor how the major broadcast news programs and cable news networks cover this [or fail to do so as the case may, sadly, be].

I checked in on the Daily Beast a few moments ago and found that they'd updated their Cheat Sheet and it now sings a different tune (see screen captures below): 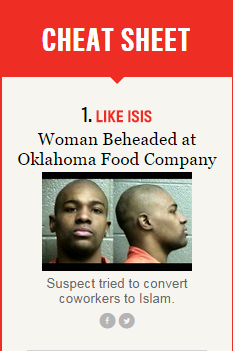 A man fired from his job yesterday allegedly beheaded a coworker Friday in Moore, Oklahoma and stabbed another. Alton Nolen, 30, was shot by a coworker and taken into custody by police at the food-processing facility where he had worked. Colleen Hufford, 54, was beheaded with a knife apparently used to cut vegetables. After killing Hufford, police said Nolen attacked Traci Johnson, 43. Mark Vaughn, chief operations officer at Vaughn Foods, confonted Noel and shot him. "There's no doubt Vaughn saved Traci Johnson's life," a police sergeant said. Vaughn is a reserve officer in the Oklahoma County police. “They have this ISIS thing on their minds and now this guy has brought it to America,” a spokesman for the Islamic Society of Greater Oklahoma City said. There is no official motive given for Nolen's attacks. Several years ago he was convicted on drug-related charges and of assaulting a police officer. 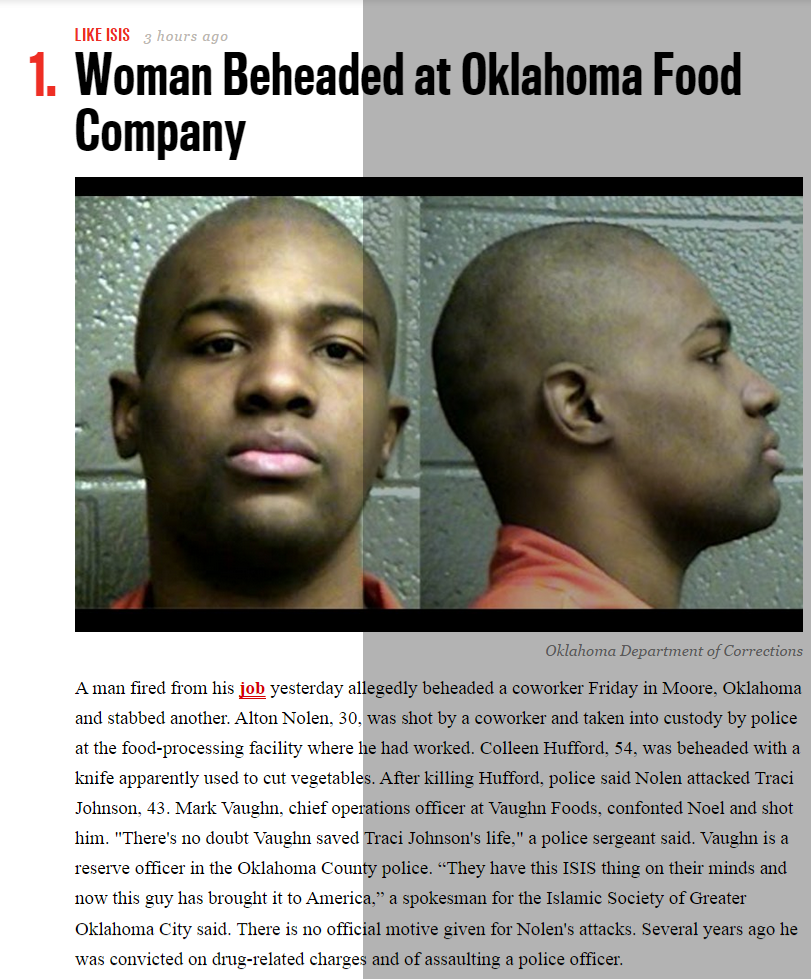