A good mother does what’s best for her children, even if that means “wiping ’em out” before they live “miserable f*cking lives” – or so Orange Is the New Black argues. 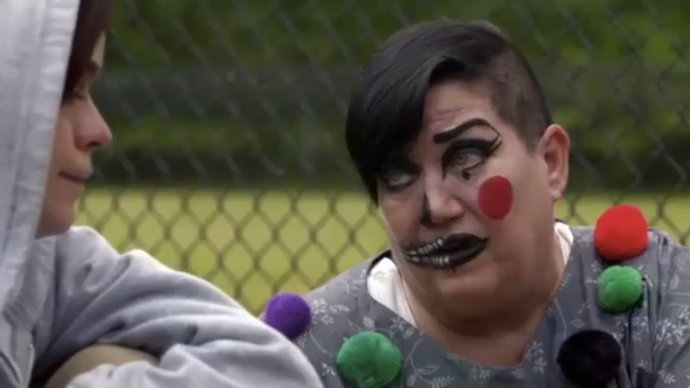 Netflix released the 3rd season of Orange Is the New Black (OITNB) Thursday night. In the first episode entitled “Mother’s Day,” the inmates and staff of Litchfield Penitentiary organize a party with games and face-painting for visiting children. In the show, Big Boo (Lea DeLaria) used Freakonomics to validate her fellow inmate’s aborted babies that would become, she says, “meth-head white trash pieces of sh*t” leading “miserable f*cking lives” – a speech the media applauded.

Before her abortion monologue, Big Boo walked in on her inmate Pennsatucky (Taryn Manning) as she knelt before six handmade crosses constructed out of popsicle sticks. Pennsatucky, a Christian, landed in jail after shooting an abortion clinic nurse (after she commented on the number of Pennsatucky’s abortions).

“Yeah,” Pennsatucky lamented, “these are all my unborn babies.” Video below.

“I’m going to hell,” she continued. “I know it. I mean, even though I was saved and everything, I just – they never even had a chance, you know?”

Big Boo interjected “Son, gotta let go of that sh*t,” before justifying abortion with her take on Freakonomics.

“[I]n the 1990s, crime fell spectacularly,” Big Boo said, “and this book attributes that to the passing of Roe v. Wade. “

She explained the book’s argument:

“[T]he abortions that occurred after Roe v. Wade, these were children that weren’t wanted. Children who, if their mothers had been forced to have them, would have grown up poor, and neglected and abused. The three most important ingredients when one is making a felon. But they were never born. So, 20 years later, when they would have been a prime crime age, they weren’t there.”

Pennsatucky interjected, “Never thought about it that way.”

“I mean, what does a good mother do?” Big Boo pointed out. “A good mother does what’s best for her children. And maybe what was best for your children was wiping ’em out before they had to live miserable f*cking lives.”

It certainly made the media feel better.

“Never have I seen such a politically profound statement come out so jagged, warped, and lovely, just like all of our inmates here at Litchfield,” wrote Vulture’s Brian Moylan about the episode.

For Jezebel, Julianne Escobedo Shepherd gushed, “[H]er monologue is, like many Big Boo monologues, the best.”

Mashable’s Sandra Gonzalez congratulated the scene, an “entirely touching and one that spells out abortion in a bold way that hasn't been seen on television in recent memory.”