God created man in His image. It’s only natural for self-obsessed liberals to try to return the favor. Just in time for Easter, The Huffington Post is blasting articles of artwork illustrating Jesus’ death and resurrection – artwork incorporating a “gay Jesus,” a yoga Jesus and a mental illness awareness-raising Jesus. 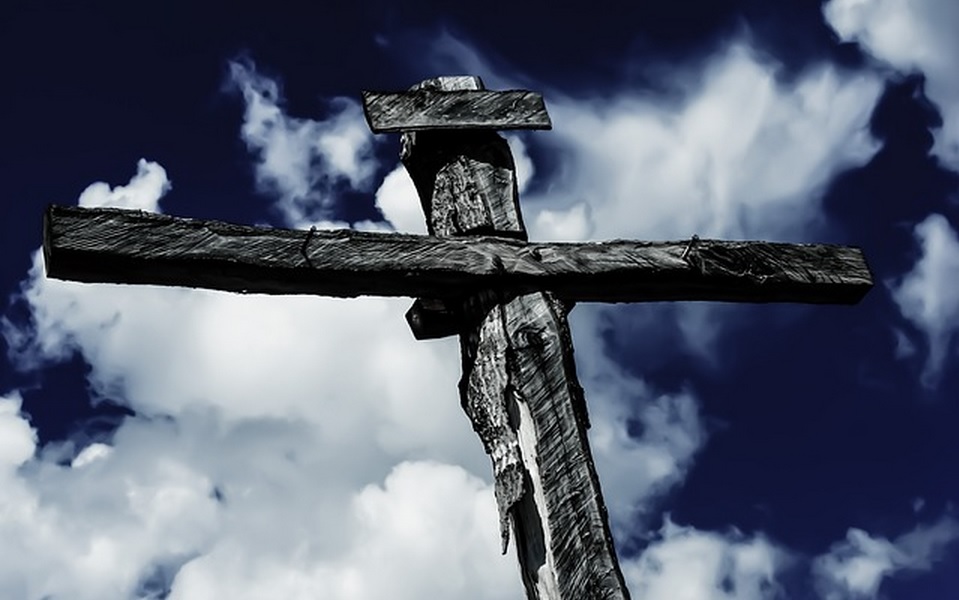 In a March 29 blog for The Huffington Post, lesbian Christian author and minister Kittredge Cherry wrote a piece defending her latest book entitled The Passion of Christ: A Gay Vision. The book contains 24 paintings of a “gay Jesus” and his “homoerotic union with God” during his crucifixion, death and resurrection. HuffPo published the piece in-between two other stories on Passion artwork – one showing Jesus in yoga positions and another incorporating mental illness.

According to Cherry, her “Gay Passion of Christ” introduced Jesus “as a gay man of today in a modern city” as he “is jeered by fundamentalists, tortured by Marine lookalikes, killed as news cameras broadcast his pain, and rises again to enjoy homoerotic union with God.” 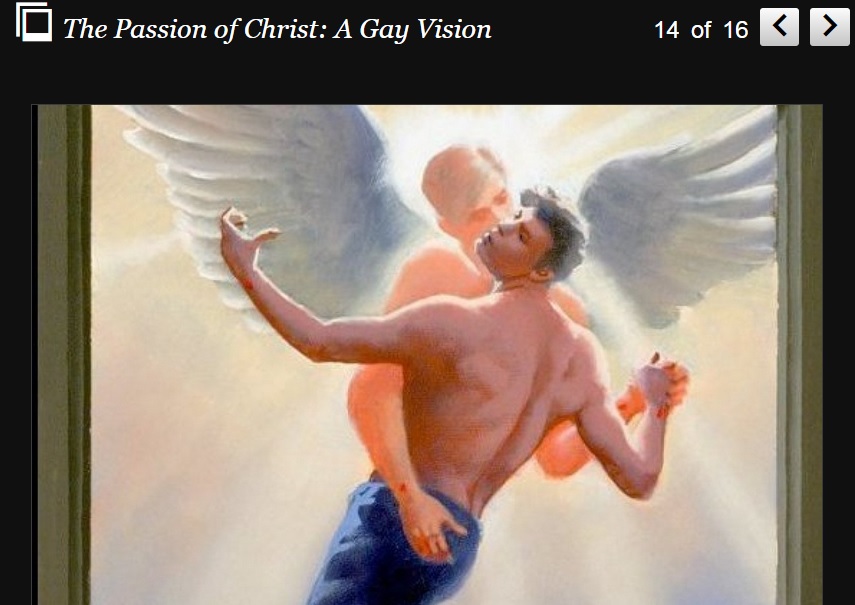 But Cherry pointed to the justification of her wording. “Nobody knows for sure what the historical Jesus looked like or whether he was attracted to other men,” she said. “Some progressive Bible scholars do argue that Jesus had a same-sex lover, but that is not the point of his life.”

It sure seemed the point of her book though.

To conservative Christians condemning her book, Cherry retorted, “[W]e refuse to concede Jesus to those who act like they own the copyright on Christ, then use him as a weapon to dominate others.”

“Many condemn the gay Passion of Christ paintings as blasphemy,” she said, “but I see them as a blessing that builds faith and a better society.”

Cherry shared some of the paintings and descriptions with The Huffington Post, including:

Cherry has penned similarly-themed books including Art That Dares: Gay Jesus, Woman Christ, and More and Jesus in Love: A Novel.

While Cherry wrote the text, New York artist Douglas Blanchard painted Jesus’ death and resurrection to create a “21st-century version of the traditional Stations of the Cross” recognized by Catholics and Protestants.

Blanchard teaches art and art history at the Bronx Community College of the City University of New York. According to Cherry, Blanchard, a gay and agnostic, “used the series to grapple with his own faith struggles.” Of course he did. He’s a liberal. It’s all about him.

The Huffington Post boasted other alternative stations in addition – the day before and the day after Cherry’s piece appeared. 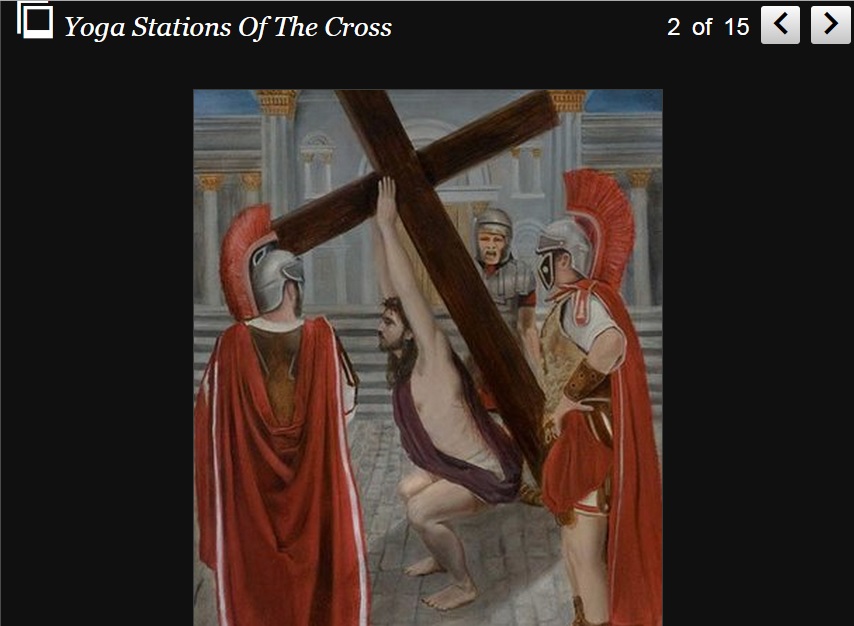 The day before, The Huffington Post’s Antonia Blumberg reported that nothing is too trivial to be projected onto the Passion, reporting that a “Los Angeles Church Hosts 'Multi-Sensory' Stations Of The Cross Using Yoga.” Created by Seattle-based attorney Anne Kelley with together with a yoga instructor and artist, the “Body in Prayer” Stations of the Cross depict Jesus in yoga positions during his crucifixion and death.

“My inspiration was that if we used our whole body, heart and soul to focus on the Stations, we could better enter into [Jesus'] suffering and open ourselves to [a] deeper relationship with God,” Kelley wrote to Blumberg.

According to Blumberg, Kelley hopes the stations become "great shorthand way of getting people to move their bodies into positions that [are] relatively safe, in a repeatable, reliable way.” How ironic. 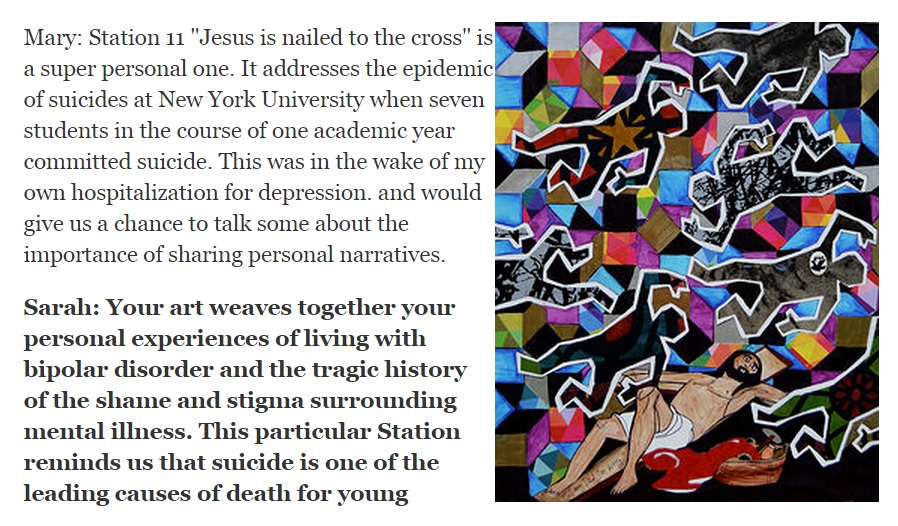 “The Stations can be used to enhance the observance of Holy Week because the raw and provocative images draw us into deeper reflection of the mystery of the Christian faith,” wrote Lund.

More serious than the other station series, Button hoped to raise awareness through her project. Her painting of "Jesus is nailed to the cross,” for example, “addresses the epidemic of suicides at New York University when seven students in the course of one academic year committed suicide.

For the media, Easter is anything but traditional. In 2014, the broadcast network secularized Easter nine out of ten times.