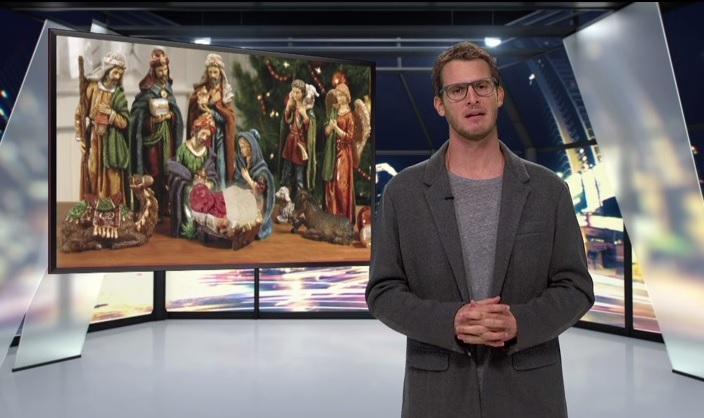 Thanksgiving isn’t even past and Comedy Central has already started on its War on Christmas – in a way so foul it’s almost impossible to imagine.

On Nov. 26, The Catholic League issued a press release on how “Comedy Central Fuels Hatred of America.” In the release, President Bill Donohue called out a Nov. 25 Christmas episode of "Tosh.0" on Comedy Central entitled “Beef Baby Jesus.” In it, host Daniel Tosh hyped how a previous episode asked viewers to tweet the hashtag #beefbaby. He then played a clip on how the "beef baby" was made – with meat, human feces and semen. And, as Donohue described, “Tosh then wrapped the ‘beef baby’ in swaddling clothes and laid him in a manger.”

The Catholic League provided a transcript of Tosh’s remarks:

A few weeks ago this show made hashtag #beefbaby the number one trending topic in the world. That's not a big deal, Twitter is meaningless. And when I told the network that we were doing a Christmas episode they insisted that I show everyone how the beef baby was born. And I thought it was a little controversial, but hey, they're the boss.

Here's what you'll need if you want to make your own beef baby at home. You take a quarter pound of beef [shows raw meat] and two sticks of steamy hot fudge [shows an up close video of a person defecating] and put it in a very obscure device called a uterine box. Then top it off with a batch of fresh squeezed glaze [a man is shown masturbating—the penis is censored]. Combine all the ingredients, and out comes a perfectly formed miracle beef baby [a clump of meat that looks like a fetus is shown]. Look at that beef baby—such a beautiful beef baby. Don't forget to wrap that beef baby in swaddling clothes, before laying him in a manger [a piece of fabric is wrapped around the beef baby and it's superimposed into a nativity scene].

In response, Donohue slammed the show:

We have men and women in the armed forces fighting for our freedoms this Thanksgiving, but what they are not fighting for is the right to abuse those freedoms. Let’s be clear about this: The depraved executives at Comedy Central who authorized this frontal assault on Christians did not exercise their First Amendment right—they perverted it.

“No wonder many Muslims look at the way we interpret freedom and wind up hating us,” he concluded. “It is the likes of Comedy Central that fuels the animus.”

This isn't the first time the controversial comedian has purposefully bashed Christians. In April, he made fun of pro-lifers in a fake ad.

Daniel Tosh's website also boasts of videos showing a Mrs. Claus pole dancer performing for an audience of small children, a "penis wall" and a Take Your Kids to Work Day at the strip club.