The feminist movement is selling something, but it isn’t feminism.

In FCKH8.com’s latest video, “Potty-Mouthed Princesses Drop F-Bombs for Feminism,” little girls between 6 and 13 years-old dressed up as pink princesses to say f*ck in the name of feminism. One girl questioned, “What is more offensive? A little girl saying f*ck or the f*cking on equal and sexist way society treats girls and women?” In response, the feminist liberal media latched onto the video, calling it “brilliant,” “empowering” and “adorable.”

During the short ad, the girls addressed – or, rather said ”f*ck” to – pay inequality (“I shouldn’t need a penis to get paid!”), rape, sexual assault and body imaging.

“F*ck that sexist sh*t,” one little girl shouted as she gave viewers the finger. 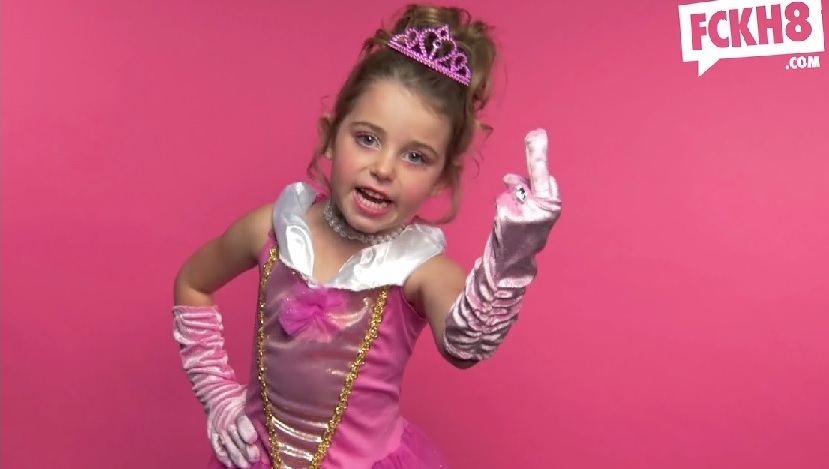 The message advertised FCKH8.com T-shirts starting at $15, with $5 going towards “anti-sexism” organizations. Founded in 2010, FCKH8.com is a self-described “company with an activist heart and a passionate social change mission: arming thousands of people with pro-LGBT equality, anti-racism and anti-sexism T-shirts that act as ‘mini-billboards’ for change.”

Calling the video “adorable and empowering,” Bustle’s Kat George gushed, “The girls have ample attitude and a confidence that I hope is instilled in this generation of tiny little power women.”

Chiming in to the discussion, Uproxx’s Ashley Burns wrote, “if you’re also the kind of person who loves when precocious children act silly for a very serious topic, then the Internet’s not going to get much better than this” and celebrated the video’s aim “to fight discrimination.”

“The fact of the matter is there are much bigger dangers these girls will face than a few four-letter words. Pay inequality. Rape. Violence,” wrote The Stir’s Ericka Sóuter on the “pretty terrific” and “brilliant idea.” She continued, “Young women and girls need to feel strong, empowered, like they have a voice -- this reminds us of that.”

For her part, Jezebel’s Kelly Faircloth loved the “great” and “entertaining” message – except for that the campaign is “trying to sell clothing” with a “slickly produced piece of viral marketing.”

The Huffington Post (Canada) hyped how “F bombs for feminism calls out real problems women face” by “serv[ing] as a reminder that the things feminism fights for can be far more horrifying than little girls swearing their faces off.”

Similarly, Mediaite’s Josh Feldman said, “little girls dressed up as princesses explain how unfair the world is to women with a crapload of words far worse than crapload.”

“Because really, as much as we don't want little girls saying fuck, I think we can all agree that we'd much rather create a world in which no one fucks them,” supported Adweek’s Rebecca Cullers.

FCKH8.com’s video producer Mike Kon reasoned how “The real shock is that women are still paid less than men for the same work in 2014, not the use of the F-word” and noted “The big statistic that 1 out of 5 women are sexually assaulted or raped is something society seems to find less offensive than a little four letter word.”

“Instead of washing these girls’ mouths out with soap,” Kon bashed, “maybe society needs to clean up its act.”

Sounds like a “Ban Bossy” echo – and rather uses feminism for fashion, rather than fashion for feminism.