Oil and Gas Prices Drop, But Nets Refuse to Credit Fracking in 93% of Stories

Thanks in part to the widespread use of technologies like hydraulic fracturing and horizontal drilling, global oil prices plummeted in 2014. Energy experts even predicted the U.S. could be the top oil producer in the next several years.

While even President Barack Obama recently hinted at his support for hydraulic fracturing, also known as fracking, the broadcast networks often portrayed it negatively. Between Sept. 29 and Dec. 8, the networks’ evening news shows stories about oil and gas largely ignored fracking’s contribution to lower prices.

Fracking and other advanced technologies helped the U.S. nearly double its average daily output of oil, from 5 million barrels in 2008 to an expected 9.42 million barrels in 2015. The huge supply increase was one factor sending crude oil prices down. Crude fell by more than 32 percent, from $93 to $63 just since Sept. 29. This already drove gas prices down to a national average of $2.66 for regular on Dec. 9, according to AAA. 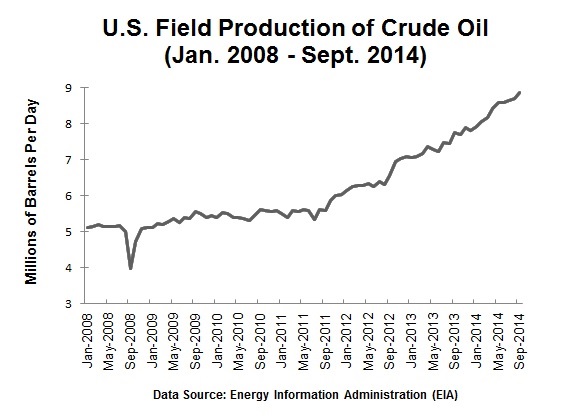 This is great news for consumers and businesses which could save as much as $1.3 trillion worldwide because of lower oil prices, according to Julian Jessop, chief global economist at Capital Economics in London. Here in the U.S., Americans could save $230 billion if prices remain low for the next year, The Washington Post said on Dec. 1.

Despite the networks’ acknowledgement of falling oil and gas prices, the evening news shows almost completely avoided giving any credit to fracking for the dramatic drop. More than 93 percent (29 of 31) of ABC, CBS and NBC evening show stories and news briefs about oil and gas ignored fracking. More than 77 percent (24 of 31) of those stories between Sept. 29, and Dec. 8, even failed to mention domestic oil production increases.

Just two of the oil and gas stories connected fracking or drilling for oil sands or shale oil to lower prices. One on “Evening News” and the other on “Nightly News.” No ABC “World News” report made the connection. Given the networks’ disapproval of fracking and fossil fuels in general, this was no surprise.

But more than 77 percent actually failed to mention increased domestic supply and production. Instead, these stories and news briefs offered alternative reasons for the decline, or no explanation at all for falling prices. In some cases, the omission was laughable.

David Faber, co-anchor of CNBC's “Squawk on the Street,” told “Nightly News” anchor Brian Williams on Oct. 15, that “we’ve had a virtual collapse in oil prices over the last month. And that, of course, means cheaper gasoline prices at the pump.”

Faber did not explain why this had occurred and Williams did not ask him to. Williams simply said, “We’ll take our good news anywhere we can get it these days,” before turning to the weather.

CBS’s “Evening News” correspondent Elaine Quijano, acting as co-anchor, said on Nov. 28, “There is an over-supply of oil on the world markets and that keeps driving the price down.” She failed to say where this “over-supply of oil” had come from.

That increased supply came from more U.S. production, especially from fracking and horizontal drilling of shale, a point the networks were hesitant to make even when asked.

Muir then said, “That would be great.” He immediately moved on to a separate line of questioning, and indicated no further interest in what might have caused this “great” trend.

But neither Thompson, nor DeHaan explained that North Dakota’s oil boom has relied heavily on fracking and horizontal drilling. The North Dakota Energy Forum said that engineers have extracted “billions of barrels oil and billions of cubic feet of natural gas” from shale formations in the state using those methods.

“Nearly 80 percent of tight shale oil and natural gas wells drilled in the next decade will require hydraulic fracturing because it allows access to formations, like shale oil and shale gas, available now as a result of technological advances,” the forum said.

All of this U.S. energy production has threatened the power of Organization of the Petroleum Exporting Countries (OPEC), a cartel comprised of Middle Eastern and South American nations that export oil. For years OPEC has artificially been able to keep oil prices high by reducing production.

OPEC announced on Nov. 27, that it would continue selling higher than expected quantities of oil instead of restricting production. Oil and gas experts widely agreed that was a defensive move.

Unlike most network stories, other news outlets have made the connection between OPEC’s waning control and fracking in the U.S.

“OPEC faces its greatest threat since the early 1980s,” said Bhushan Bahree, an OPEC analyst at the market research firm IHS, according to the Nov. 27, New York Times. The article also said competition from American companies using advanced methods of extraction, oil prices have “spun out of OPEC’s control.”

Bloomberg reported on Dec. 1, that “Global energy markets have been upended by an unprecedented North American oil boom brought on by hydraulic fracturing.”

It was uncertain how long OPEC could maintain this strategy. OPEC nations, as well as Russia, rely on oil revenues to fund government budgets, and have felt financial pressure to cut production in order to raise global oil prices again. The Wall Street Journal said on Nov. 27, “Among OPEC’s members, only Qatar and Kuwait will be able to balance their budgets next year with prices at their current level.”

Venezuela was experiencing particular difficulties. That economy was on the verge of collapsing, CNBC said on Dec. 1. If low oil prices continued, Venezuela may face a “game over” situation and “barbarity and people looting.”

Network opposition to fossil fuels, drilling and fracking was nothing new.

Between 2010 and 2013, network news shows served as a platform for celebrity and activist filmmaker’s attacks on fracking. Fully half (18 of 36) of broadcast network news reports on fracking in that time mentioned or cited one of Josh Fox’s controversial films, “Gasland” and “Gasland II,” or included a famous opponent of fracking.

The massive price drop in 2014 didn’t take oil speculators by surprise. Bloomberg Businessweek said speculators anticipated fracking’s impact on oil prices for “more than a year.” But the networks had other views. CBS Money Watch reported on July 20, 2011, saying fracking was no “magic bullet,” and “there won't be plenty of oil forever.” NBC News also ignored the impact of fracking in March 12, 2012, article on which reported, “Kuwaiti scientists now say that global oil production will peak in 2014.”

Larry Kudlow, a senior contributor at CNBC, observed that the media has been “grumpy” about recent declines in the price of oil, and ought to be more “optimistic” instead. “This is not only a triumph of U.S. energy independence, it is a victory for the workings of the free market. Greater supply, not government cartels, is driving down prices,” Kudlow said in a National Review op-ed Nov. 28.

Fracking was not the only drilling technology that the broadcast news networks opposed. In June 2008, polls found that the majority of Americans supported boosting domestic oil production, while the Bush administration proposed lifting a federal ban on offshore drilling.

Yet, CBS correspondent Bill Whitaker favored opponents of increased production by stacking his story with them. His lopsided report included twice as many sound bites against the Bush administration’s proposal as for it.

The networks have also attempted to fuel guilt complexes regarding oil use. Ann Curry, NBC’s national and international correspondent, claimed that the U.S. was responsible for the alleged consequences of drilling taking place in other parts of the world on “Today” May 3, 2013.

Methodology: The MRC’s Business and Media Institute analyzed all the stories from the evening news programs which included the term “oil,” “gas,” and “gasoline,” that ran on the broadcast network evening news shows from Sept. 29, 2014, through Dec. 8, 2014. Stories that used these words in an unrelated context (e.g., “olive oil” or “tear gas”) were excluded, as well as stories that only mentioned the search terms in passing (e.g., a story on “World News” Nov. 5 said that a winning lottery ticket was sold at a “gas station”). Of the 31 remaining stories, only two connected fracking, drilling for oil sands or shale oil, or horizontal drilling to lower oil and/or gas prices.