Rand Paul to Savannah Guthrie: ‘Instead of Editorializing…Ask Me A Question’

On Wednesday, Today co-host Savannah Guthrie repeatedly badgered Kentucky Senator Rand Paul over his views on foreign policy following his presidential announcement. Things got so heated during the discussion that Paul had to tell Guthrie “before we go through a litany of things you say I’ve changed on, why don't you ask me a question.”

After discussing whether or not he had presidential ambitions growing up, the interview got combative over whether or not Senator Paul would ever support a U.S. nuclear deal with Iran. Despite explaining that “part of the problem” is that Iran has interpreted the nuclear framework differently than the United States, Guthrie interrupted the Tea Party senator and demanded that he “take that issue off the table.”

The Today co-host eventually allowed Senator Paul to answer her question but then proceeded to lecture him on how his foreign policy positions have evolved over the years:

You have had views in the past on foreign policy that are somewhat unorthodox, but you seem to have changed over the years. You once said Iran was not a threat, now you say it is. You once proposed ending foreign aid to Israel, you now support it at least for the time being…You wanted to cut defense spending and now you want to increase it 16%. So I just wonder if you’ve mellowed out.

For his part, Paul objected to Savannah Guthrie’s editorializing on his foreign policy positions and asked her to “let me explain instead of talking over me." Paul then told her “before we go through a litany of things you say I’ve changed on, why don't you ask me a question? Have I changed my opinion? That would be sort of a better way to approach an interview.” 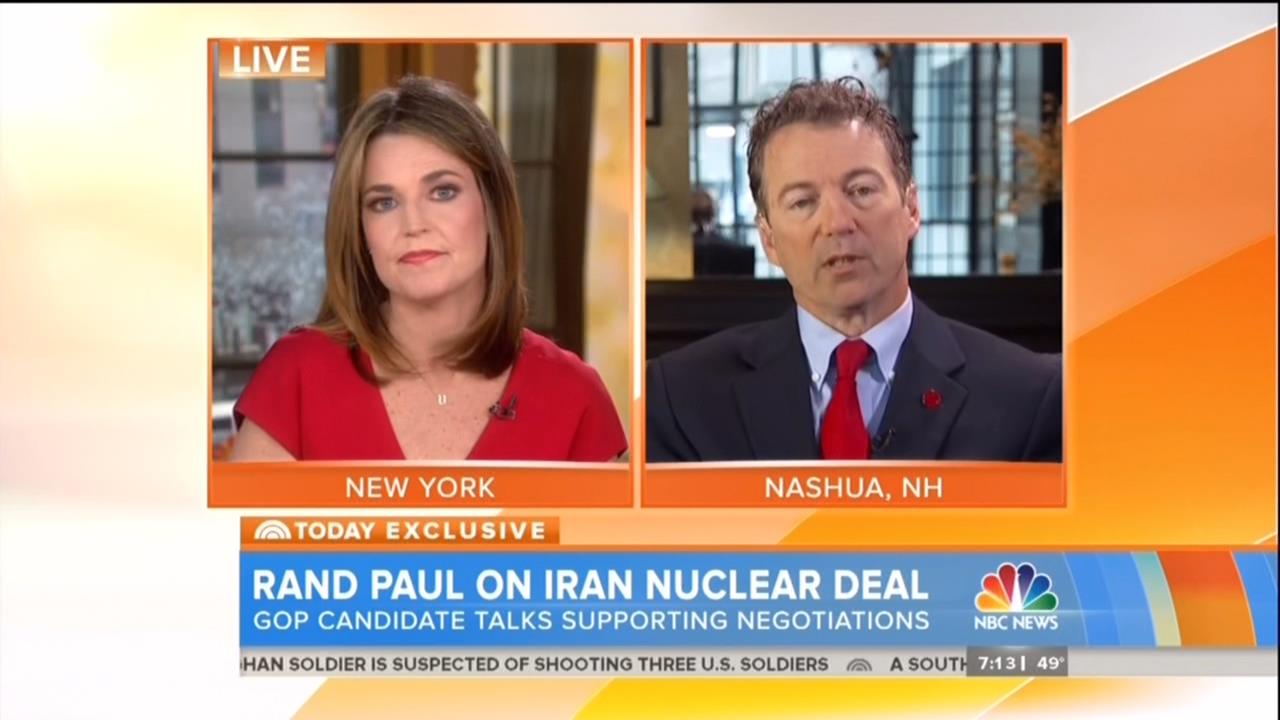 Guthrie continued to interrupt the senator without letting him articulate what his actual foreign policy views were and Paul once again asked her to just let him answer the question.

You have editorialized. Let me answer a question. You ask a question and you say have your views changed instead of editorializing and saying my views have changed.

Eventually the NBCer allowed her Republican guest to answer her question but she made sure to take one final shot at his foreign policy views:

I think the question I was getting at in general is just that when you came to Washington and you realized I am going to run for president, have you mellowed or tempered your views at all?

Guthrie's harsh treatment of Senator Paul was in stark contrast to a recent interview she conducted with liberal Massachusetts Senator Elizabeth Warren. During the March 31 discussion, Guthrie repeatedly urged Warren to run for president, even to the point of wondering whether or not Hillary Clinton was liberal enough for the modern Democratic Party.

SAVANNAH GUTHRIE: Now to the race to become the next president. Republican Senator Rand Paul launched his campaign on Tuesday with a fiery speech in his home state of Kentucky. Here's three quick facts to know about Senator Paul. He’s an eye doctor, still practices medicine, performing pro-bono surgeries in recent years. His father is former Congressman Ron Paul. You know him because he ran for president three times. And he was called Randy as a child, but it was his wife who shortened his name to Rand. And Senator Rand Paul is already on the campaign trail with us. And joining us exclusively from New Hampshire this morning. Senator, good morning. Good to see you.

RAND PAUL: Good morning. Thanks for having me.

GUTHRIE: Its official, you are running for president but those who have watched you closely have seen you kind of laying the groundwork for this for years. You have been in office about four years. Was higher office, the presidency, always the master plan for you?

PAUL: You know, it’s kind of funny. You’ll meet people who are running for president and their friends will say “oh in eighth grade he said he was going to run for president.” I guess when I grew up I grew up a more normal existence. I was concerned about, you know, playing football, running track, being on the swimming team, academics, reading. But never really thought about it.

And even once I launched my career, I spent a lot of time, many, many years, becoming an eye surgeon and so I never really thought of it. In the back of my mind I thought I may run for an office someday, but no, never in my wildest dreams would I think there would be a constellation of events that would come forward that would allow me to. But I do think that the message I have to offer is a distinct one and I think it is resonating.

GUTHRIE: Well here you are. You are now officially a

PAUL: You know, I think that's part of the problem.

GUTHRIE: Right, but let's take that issue off the

PAUL: Let me answer the question. Let me answer the question. The sincerity of the Iranians does make a big difference. And if they’re immediately saying that the agreement doesn’t mean what President Obama says, that is a big problem. The other thing is so far we have seen fact sheets. The Iranians put out 500 words, the Americans put out 1,300 words, the Europeans put out 200 words and they don't all seem to agree. But it’s very, very little information so far.

I’m going to keep an open mind and look at the agreement. I do believe that negotiation is better than war. I’ve been a big proponent of negotiation. But I also say that the law is very specific in this. I voted to put sanctions on Iran. Sanctions can only be relieved by Congress voting to remove those and so that’s why I’ve signed onto the Corker bill which would actually say that any kind of permanent reduction or relief from sanctions has to be voted on in Congress.

GUTHRIE: You have had views in the past on foreign policy that are somewhat unorthodox, but you seem to have changed over the years. You once said Iran was not a threat, now you say it is. You once proposed ending foreign aid to Israel, you now support it, at least for the time being. And you once offered to drastically cut -- wait, wait.

PAUL: Before we go-- 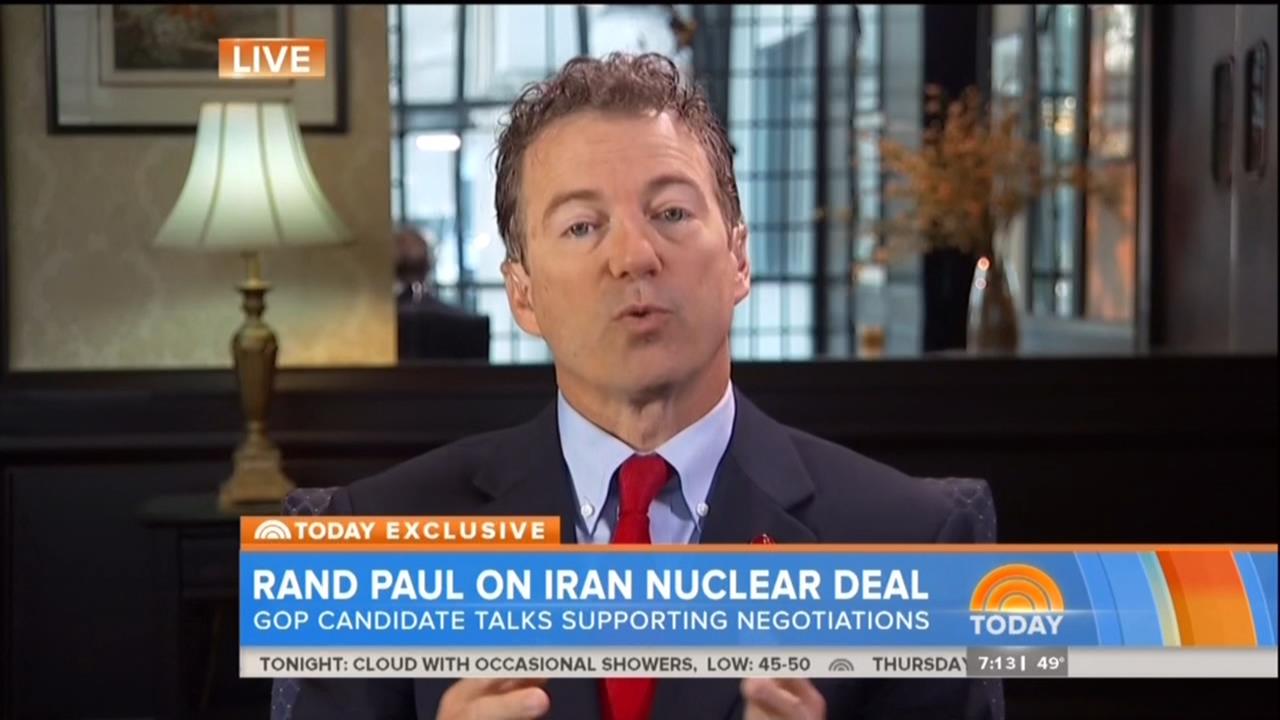 GUTHRIE: Wanted to cut defense spending and now you want to increase it 16%. So I just wonder if you’ve mellowed out.

PAUL: Why don't you let me explain instead of talking over me, okay?

PAUL: Before we go through a litany of things you say I’ve changed on, why don't you ask me a question? Have I changed my opinion?

GUTHRIE: Have you changed your opinion?

PAUL: That would be sort of a better way to approach an interview.

GUTHRIE: Is Iran still not a threat?

PAUL: You’ve editorialized. No, no, no, no, no, no. Listen. You have editorialized. Let me answer a question. You ask a question and you say have your views changed instead of editorializing and saying my views have changed. Okay, let's start out with regard to foreign aid. My opinion has always been that we shouldn't borrow money from China to send it to any country, Pakistan, Israel or any other country.

But I also realize that things will have to be done gradually and that if we are going to try to eliminate or reduce foreign aid, why don’t we start with the countries that hate us, that burn our flag. And the one thing that is true is that Israel doesn’t burn our flag. And so I haven't proposed removing aid from Israel but I still agree-

GUTHRIE: But you once did.

PAUL: With my original precept which is—let me answer the question. I still agree with my original statement from years ago that ultimately all nations should be free of foreign aid because we shouldn’t borrow money to do it. But my opinion is not any different than Netanyahu's opinion. When he came before a joint session of Congress in 1996, he said you know what, eventually Israel ought to also be independent of it and that Israel's defense may be stronger because then they wouldn't be forced to buy defense products from outside the country.

GUTHRIE: Do you still think Iran is not a threat as you said in 2007?

PAUL: 2007 was a long time ago and events do change over long periods of time so we are talking about eight years ago. We’re talking about a time when I wasn’t running for office and I was helping someone else run for office. What I would say is that there has always been a threat of Iran gaining nuclear weapons and I think that's greater now than it was many years ago. I think we should do everything we can to stop them. I voted for sanctions to try to stop them.

I am somewhat skeptical of the president's agreement, however, I am in favor of negotiations over war. And I think I have been one of the reasonable people in our party who has not been beating the drums for war. And so I think my position on Iran is one that reflects the events and reflects the current history with regards to Iran.

GUTHRIE: And before I let you go, I mean, I think the question I was getting at in general is just that when you came to Washington and you realized I am going to run for president, have you mellowed or tempered your views at all?

PAUL: I think what I’ve understood as I’ve come to Washington is that Washington’s horribly broken and we have to try to fix it. I think the deficit goes on whether Republicans or Democrats are in charge. And sometimes we point fingers too much and say it's the fault of one party or the other. I think there is enough blame to go around, but what I’ve come to the conclusion is is that we need more turnover. I'm a big fan of term limits. I think we will only improve when we have term limits and when we have rules such as a balanced budget amendment which force Congress to do the job they seem to be incapable of doing.

GUTHRIE: Senator Rand Paul, look forward to talking to you in the future. Thank you for your time this morning. Appreciate it.