On Friday night, HBO’s Bill Maher resoundingly mocked the Democratic Party’s electoral defeat during this year’s midterm election but made sure to attack the Republican Party as being motivated by race.

During a panel discussion on Real Time w/ Bill Maher, Maher proclaimed that “the issue in this election was still the first black president. I really do. I think it was still resentment about his winning re-election and it was just those people who came out to vote, wanted to prove to the rest of America that they were right all along about how much Obama sucks.”

The liberal comedian continued to discredit the GOP victory and argued that after the midterms “the south is now solid Republican the way it was solid Democrat at one point. It seems to me like the Civil War is still going on, it's just being fought politically now.”

After insisting that the 2014 midterms was about “the first black president” Maher turned his focus on Democrats and argued that they suck at selling Obama’s agenda:

It was a simple message for a simple people. Screw Obama and it worked because none of the Democrats came out for Obama. "The Huffington Post" studied this. In a bunch of debates, 125 debates they studied 500 references to Obama from Democrats. Only seven were positive. Democrats suck. They really do.

Maher then discussed the so-called Democratic successes with his panelists and why the party fails to push Obama’s agenda before concluding “they’re horrible. They acted like -- they treated Obama like a teenager treats his mother. I don't really know her. I don't know that person who dropped me off here.” 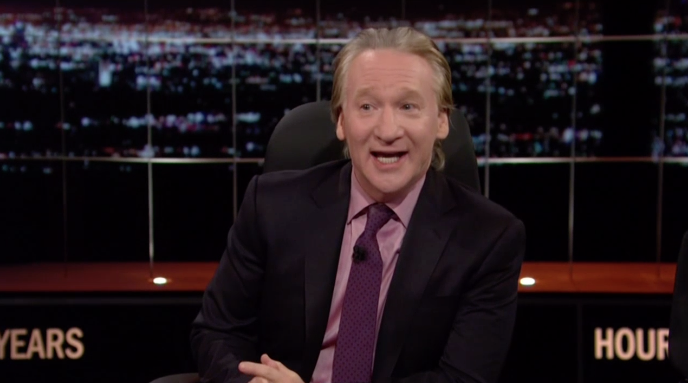 BILL MAHER: I know the Republicans are going to hate me for saying this, but I think the issue in this election was still the first black president. I really do. I think it was still resentment about his winning re-election and it was just those people who came out to vote, wanted to prove to the rest of America that they were right all along about how much Obama sucks.

ROBERT COSTA: Except maybe in Utah with Mia Love. You mentioned Mia Love in Utah. She’s the African-American Republican who was elected.

MAHER: Well, she's a Republican Mormon so she won 2-1.

BERNIE SANDERS: I think, Bill, what was remarkable about this election is the -- that given all of the terribly serious problems facing our country, the collapse of the middle class. Wealth and income inequality, climate change. There was very little discussion about those issues. And what the Republicans, very successfully, what they successfully did--

SANDERS: What they said is look, is the economy in bad shape? Yeah, it is. People are hurting. It’s all Obama's fault and anyone who works with Obama you should throw out. That was about what their campaign was about.

MAHER: Ok, so it's not about race. I was crazy. And yet, I noticed that Georgia’s John Barro, he lost his race. He’s the last white Democrat. The south is now solid Republican the way it was solid Democrat at one point. It seems to me like the Civil War is still going on, it's just being fought politically now.

KRISTEN SOLTIS ANDERSON: But we were just a few years ago talking about the idea that wasn't the Republican party a regional party. Republicans could only win the south because that’s where their voters lived. But Republicans would never be able to win in these blue or purple states. What you saw on Tuesday night was Republicans winning re-election in an awful lot of blue states, picking up governor's mansions in states like Massachusetts.

SOLTIS ANDERSON: In Maryland, kind of a surprise win there. So for all the talk that we had a few years ago about Republicans being this regional party, during this midterm, the tables really got turned around. I think what’s fascinating is, if there’s only one thing we can agree on this election was about people being really ticked off but everybody was ticked off about something different in each race. There wasn't much of a national theme except frustration. 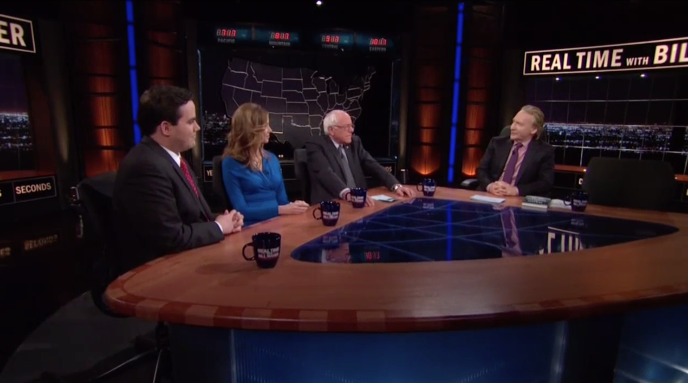 COSTA: I think it was also about people staying home. You mentioned Georgia. What happened to Michelle Nunn the Democrat? She was probably one of the best Democrats out there running for the United States Senate. David Purdue the Republican he had a stumbling campaign. He was constantly talking about outsourcing. And the demographics are changing in Georgia favorable for the Democrats yet they just couldn't turn out voters.

SANDERS: Well, I think what that's about is that the vast majority of people are really giving up on the political system. Ordinary people are hurting. They work longer hours for low wages. They know we're the only major country on Earth that doesn't have a national health care program. They look at Washington and they say, hey, what’s going on in Washington? These guys are representing the billionaire class. Why should I come out and vote? And what the Republicans also did very effectively is disguise what their agenda is. What is their agenda? It’s easy to beat up on Obama. What are they going to do when they get to office?

COSTA: No Contract For America. No pledge to America. They ran a referendum campaign. A traditional midterm campaign in a president's second term.

MAHER: It was a simple message for a simple people. Screw Obama and it worked because none of the Democrats came out for Obama. "The Huffington Post" studied this. In a bunch of debates, 125 debates they studied 500 references to Obama from Democrats. Only seven were positive. Democrats suck. They really do. I don't blame you for being an independent, Bernie I really don’t.

SOLTIS ANDERSON: But every time a party loses an election, big. Republicans, we’ve gone through this during the last two presidential years. These elections are kind of like those inkblot tests. You can see what you want to see about what your party needs do to move forward.

For Republicans, every time we lose, there's always this big internal fight. Did we lose because we're too conservative, we only appealed to a small group or voters or did we lose because we didn't stick to our principles enough and we picked some wishy washy moderate? We have this fight all the time. It’s fascinating to watch it happen on the other side but I think a lot of Republicans would disagree that they would have done worse had the other side talked more positively.

MAHER: You’re a strategist right? Okay, so imagine that you're working on the other side. Okay? Was it really that hard of a record for Democrats to run on? I mean I saw the news today. Unemployment is now down to 5.8%. It was 10.2% when he first took office. 200,000 jobs for nine months in a row. We haven't had a streak like that since 1995. Gas prices are down, the stock market is at record highs. Just tell me, honestly, if you were on the other side, this isn't that hard a record to run on, right?

SOLTIS ANDERSON: What matters is how voters are feeling about their own economic situation and they're not feeling good about it. If you’ve got a lot of money in the stock market you're probably feeling great but if you're kind of middle class wages, if you’re a working class white guy frankly you're not feeling that great Obama economy.

SANDERS: That’s true but that's a trend that’s been going on for the last 40 years and in fact we’re much better off economically—

MAHER: And whose fault was that?

SANDERS: Than we were six years ago. But here's the interesting point. You talk about Republican principles. The Republicans forgot to tell the American people what their principles are, so let me make a prediction --

MAHER: But it didn't matter.

SANDERS: That’s right. Bill, let me make a prediction and a year from now, invite me back we’ll see if I’m right or wrong. This is exactly what they'll do. The American people want to expand Social Security. What the Republicans will do is attempt to cut Social Security and Medicare and Medicaid and give huge tax breaks to the wealthy and large corporations. They'll do exactly what the American people do not want them to do. You talk about raising the minimum wage. They don’t believe in that. They want to do away with the concept of the minimum wage so people will work for $5 to $4 an hour.

COSTA: They may want to do that but we still have divided government. You have a Republican House and a Republican Senate and it's going to be incremental. Look at what McConnell and Boehner are talking about this week. They’re talking maybe about tax reform, trade agreements, the Keystone pipeline. There's not any grand ambition right now within the Republican Party because they know the president will veto whatever they throw at him in Pennsylvania Avenue..

MAHER: But here, I mentioned this in the monologue and it's the frustrating part. When you saw things on the ballot like minimum wage, like gun control, pot, things that people got to vote on specifically, they are obviously with the liberals and yet they also vote for people who will block these very things that they want. What does that tell you? I keep hearing it's a wave election.

You know what, every fucking election is a wave election now. I remember when Bush lost in 2006. We got thumped. This guy Manchin yesterday said it was an ass whooping. Every election is an ass whipping because people don't look under the hood. They don't know why things don't work so they just throw the bums out every two years and that's not helping.

SOLTIS ANDERSON: The other reason why we have this sort of weird wave pendulum back and forth is because of how the political parties and the demographics have really realigned in the country. So it used to be, it’s always been the case that midterm elections are frankly older, whiter people. The difference is that didn't used to mean a more Republican electorate all the time.

Now you do have this divide where Republicans tend to do very well amongst white voters, very well amongst older voters. But still struggle with voters who are younger who are not white. Who are the voters who overwhelmingly tend to not turn out in these midterm elections. So that's why it looks like a wave, not necessarily because people's minds are changing significantly from election to election but because of that realignment of demographics and partisanship.

COSTA: Right, it could be a brief celebration. Republicans could be celebrating right now but if they don't make the moves they need to on immigration and reaching out to younger voters and women and minority voters, 2016 could be a rough ride.

SANDERS: But let me go back to the point you made a moment ago which is really important. The American people do not agree with the Republican agenda. That’s just simply true. What they do want, and poll after poll shows this. You know what they want? They want a jobs program to create millions of jobs rebuilding our crumbling infrastructure. They want to expand Social Security, not see it cut. What they want to do is make sure that young people can afford to go to college and not leave college deeply in debt.

COSTA: Where were the Democrats talking about that? All I heard when I was on the campaign trail was Democrats sounding like Republicans on foreign policy. Where were they rallying

MAHER: They’re horrible. They acted like -- they treated Obama like a teenager treats his mother. I don't really know her. I don't know that person who dropped me off here.