Lena Dunham, liberal feminist and star of the HBO series Girls, appeared on Tuesday’s Good Morning America to promote her new book “Not that kind of girl” and was treated to a fawning interview by ABC co-host Robin Roberts.

Prior to discussing the book, Roberts proclaimed that George Stephanopoulos was “still blushing because you called him handsome” to which Dunham responded “George is something of a sexual icon.”

Robin Roberts began her promotional interview with Dunham by declaring that she’s the “creative force behind the HBO sensation, Girls. Can't wait for January to get here. And now she's an author. She’s adding that to her list of accomplishments…You got rave reviews the last time you were here.”

The GMA co-host continued to gush over Dunham and insisted “I have learned so much more about you and that doesn't surprise me hearing that. It is really, it’s beautiful…It's a conversation with you all over the place. And it's who you are. What inspired you to write this? You have so much going on.”

While the majority of the interview was spent discussing the various topics in Dunham’s book, Roberts made sure to conclude the interview by giving one last endorsement of the HBO actress:

ROBERTS: And you go there in so many different ways in the book. And I love your folks. They come shining through in this.

ROBERTS: I can't wait for the fourth season of Girls.

ROBERTS: Hannah and the girls.

DUNHAM: Hannah and the girls are back. Some new haircuts, some new foibles, some good guest stars. We’re ready to rock and roll.

Robin Roberts’ advertising for Lena Dunham’s latest book should come as no surprise given the “big three” networks’ obsession with covering liberal bestselling books 2-1 over their conservative counterparts. A recent study by the MRC’s Culture and Media Institute found that between January and September of 2014, 62.5% of the liberal authors on the New York Times bestseller list appeared on ABC, CBS and NBC whereas just 30 percent of conservative bestselling authors appeared on the “big three” networks. 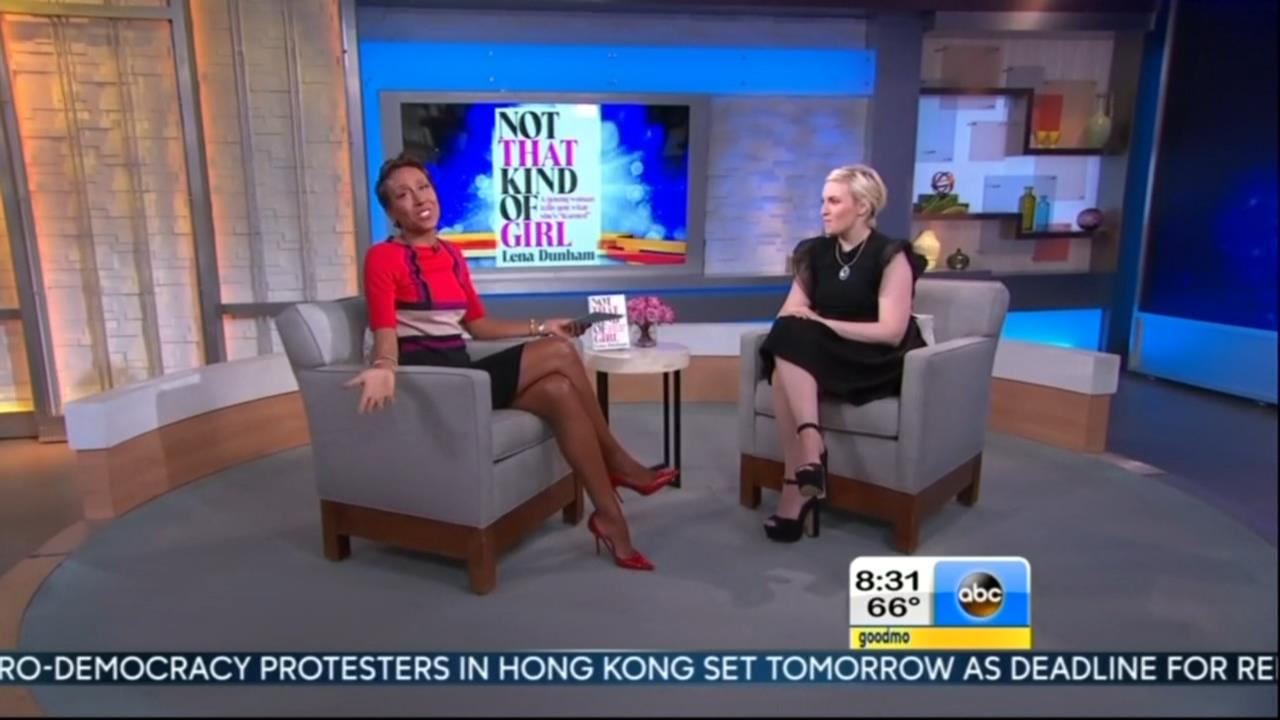 ROBIN ROBERTS: We’re having a good time down here talking. Lena Dunham is here. You know her, she’s the star, creative force behind the HBO sensation, Girls. Can't wait for January to get here. And now she's an author. She’s adding that to her list of accomplishments. Her brand new book, "Not that kind of girl: a young woman tells what she's learned” is out today. Lena thank you for being here.

LENA DUNHAM: Thank you for having me Robin.

ROBERTS: You got rave reviews the last time you were here. And George is still blushing because you called him handsome.

DUNHAM: I'm not the first one to have said it.

ROBERTS: No, but he loved it.

DUNHAM: George is something of a sexual icon.

ROBERTS: I wish he was down here. Somehow he knows that. Look a little different from the last time you were here. Is it true blondes have more fun?

DUNHAM: You know, here’s what I’ll say. I was a blonde child. So I feel connected to being blonde. But I think what happens when you're blonde is that there's some reaction, some prehistoric reaction in stupid men where they start like holding more doors open for you, hailing cabs for you. So I’ve definitely had a lot of services rendered to me that did not avail me, I was not availed of when I was a brunette.

ROBERTS: I have learned so much more about you and that doesn't surprise me hearing that. It is really, it’s beautiful.

ROBERTS: It's a conversation with you all over the place. And it's who you are. What inspired you to write this? You have so much going on.

DUNHAM: You know with television, it’s such an incredibly-- I love my collaborators at "Girls" so much as you know. It takes a village to make a television show. It's incredibly interactive, it’s incredibly social. And I really wanted to get back to that intimate relationship with the page that you have as a writer of prose. And so this was like me going back into my bed as a teenager and journaling in a slightly-more evolved form.

ROBERTS: Yeah it is that. The illustrator is really good.

DUNHAM: That’s one of my best friends Joanna Avalez. We’ve been friends since we were 3 years old. She was always the girl in class who you wanted her to make, do your art project for you. And then you would get rave reviews from the teacher. And so now I’ve gotten to get her to do that on a bigger scale.

ROBERTS: It's a beautiful book.

ROBERTS: And you do journal, you share some of your journal about we’re not going to make you read what you ate in one day in particular.

DUNHAM: That was the worst day of my life. So thank you.

ROBERTS: We won’t make you relive that. But you do talk about it. And you see all these young women that are here and we’re always concerned about our body image and issues and that, and you’ve really come to peace.

DUNHAM: Well you know, that was in some ways the hardest chapter in the book for me. People think it would be like the sexual humiliations, the challenging relationship. But for me it was just being clear about the fact that I have spent a lot of time thinking about food. And you know, I spent a lot of my career trying to break down some of the negative -- the negative forces that the media exerts on women in trying to control their body image.

And so for me, it felt very -- it felt very sort of, you know, anathema to who I am to admit that I too have struggled with the concept of sort of perfection. And I think it's something we're all dealing with every day. But I have to say when you love your job and you love what you do and you're sort of engaged, you really feel like a tool being put to its proper use. Suddenly you think of food as fuel. And you think of it as a way to get to where you need to go and less sort of your demise.

ROBERTS: Well I agree with you, diet is a four-letter word and I hope the young girls that are out there—

DUNHAM: Diet is a four-letter word is something I learned from my grandmother and I will take it to the grave.

ROBERTS: Therapy and me. That's a chapter that really resonates with a lot of people. And you talk about from a young age that you were afraid of -- just about everything. And you still are dealing with that in some ways.

DUNHAM: Yeah, you know I think one of the reasons it was so important to me to talk about my relationship to therapy and the fact that I have obsessive-compulsive disorder, is just, I feel like there's a conversation about mental health that needs to happen that we are just at the beginning of. And I think that all of us sharing our struggles with the world inside our heads, whether big or small, can help other people to normalize their experiences.

And, you know, I definitely have struggled with anxiety, with obsessive-compulsive disorder, and I was very lucky to have parents who had a very forward-thinking attitude about putting me into therapy at a young age and giving me tools to move forward. Not everyone’s that lucky and I don’t want to sound grandiose but I think its part of the reason that we see so many shootings in this country. There's a conversation about mental health that is just as important as all the other dialogues we’re in nationally.

ROBERTS: And you go there in so many different ways in the book. And I love your folks. They come shining through in this.

ROBERTS: I can't wait for the fourth season of Girls.

ROBERTS: Hannah and the "Girls.”

DUNHAM: Hannah and the girls are back. Some new haircuts, some new foibles, some good guest stars. We’re ready to rock and roll.

ROBERTS: And it’s not like you’re not busy enough. We were talking to our writer, Mitch, who just fell in love with you.

ROBERTS: And something about "Guys and dolls" and that you’d want to sing in a musical.

DUNHAM: Oh I was asked if I could have any secret talent what would it be? And I said I’d want to perform Adelaide in "Guys and Dolls.”

DUNHAM: My accent’s not great. It's like a person can develop a cold. That’s what I’ve got.

DUNHAM: Thank you. That's the most you are ever going to get for that.

ROBERTS: You are a delight. Thank you for being here.

DUNHAM: Thank you. As are you. And thank you for talking to me. And I hope that you enjoyed the book.