Rupert Murdoch: The Man Who Broke the Iron Grip of Liberal Media in America

My favorite Rupert Murdoch story? It goes like this.

Murdoch buys the London newspaper The Sun. He wanted to make it a tabloid, which his printers told him was not possible. Why? The presses he owned printed a broadsheet, or, in layman’s language, a large newspaper format like those in the United States of The New York Times, Washington Post or Wall Street Journal. The presses were not formatted to print a tabloid. Murdoch biographer William Shawcross tells the rest of the story this way:

“He (Murdoch) informed the printers that their presses had originally been supplied with bars which would fold the pages to tabloid size. The head printer denied it. So Murdoch took off his jacket and climbed onto a press. In a box at the top of the machine he found the bar in question wrapped in sacking and covered in ink and grime. The printers were impressed.”

Murdoch got his tabloid.

This week brought the news that Rupert Murdoch was handing over the day-to-day operation of his vast, self-built (yes, he really did build it) media empire. The New York Times headlined it this way:

Rupert Murdoch’s long-held plan to hand over his media empire to his sons is now being realized.

Mr. Murdoch is expected to name his son James to succeed him as chief executive of 21st Century Fox, the sprawling entertainment company that includes cable and broadcast television networks, film studios and satellite companies, multiple people briefed on the plans said on Thursday.

He also is expected to elevate his son Lachlan to the role of co-executive chairman of the company. Lachlan, 43, is moving from Australia to Los Angeles and will work in partnership with James, 42, these people said.

Rupert, 84, will remain at the company as executive chairman.

The exact timing for the changes is unclear. They are said to be part of Rupert’s long-term succession plans and are likely to be discussed at a board meeting next week, two people said.

While his sons are stepping into the spotlight, Rupert is expected to continue to provide broad strategic oversight and will retain ultimate control of the company, said the two people. The family effectively controls both 21st Century Fox and News Corporation, the other half of the Murdoch media empire, through its ownership of almost 40 percent of the voting shares in both companies. Rupert Murdoch has more rights in the family trust than his children.

In other words? At 84, Rupert Murdoch is signaling in his own fashion that when the inevitable way of the world turns to him, he will have prepared both his company and his sons to carry forward. Good for him.

There are two points here. First would be the obvious: Rupert Murdoch has spent a lifetime working relentlessly on a stunning accomplishment. As that story of Murdoch and the printing press illustrates, Murdoch’s relentless attention to detail has created a media empire that now, a decade and a half into the 21st century, spans not only the globe but every means of communication from satellites to television, film, newspapers, books and, of critical importance in the new century, the digital.  As it were: content, content, content. 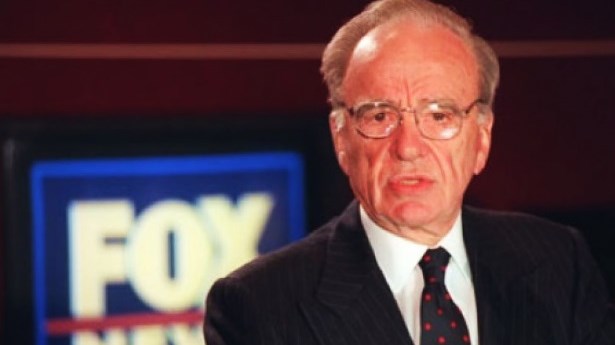 The second point? Along the way Murdoch - with the not inconsiderable gifts of Roger Ailes - has broken the once seemingly unbreakable iron grip of the liberal media in America. For good. The creation of Fox News was a priceless contribution to the American political scene. It enabled Americans to finally get a just-the-facts presentation of the news of the day, along with a “fair and balanced” presentation of political views that for the very first time gave conservative commentators - with liberals plenty in evidence - a serious pulpit in the world of modern American media. Once upon a time the television careers of someone like Sean Hannity and the commentary of a vast crowd of conservatives would have been impossible in the world of American media as run by liberals of the day. It was Murdoch and Ailes who made the impossible the routine.

Almost from the moment Murdoch appeared on American shores the liberal media has been alternately aghast, agog, angered and awed by his presence.  A classic example was this January 1977 Time magazine cover that depicts Murdoch as King Kong astride the twin towers of New York’s World Trade Center, clutching New York publications he then owned, then and now including the New York Post. The banner that splashed across the  cover reading in tabloid style: "EXTRA!!! Aussie Press Lord Terrifies Gotham." And indeed he did - and still does. Said Time of Murdoch’s beginning in taking over the media outlets in Australia bequeathed to him by his father Keith:

Though Sir Keith had been chief executive of one of the nation’s largest newspaper chains, he held little stock, and death duties ate up most of that. The Murdoch family was left with a tired pair of newspapers in the southern Australian city of Adelaide and a radio station in remote Broken Hill. Says a friend: “That experience taught him the importance of 51% control.” Rupert set out to accomplish what his father had not. First he talked Sir Keith’s longtime friend, the capricious Lord Beaverbrook, into letting him apprentice as a $40-a-week subeditor on the London Daily Express. Then, at age 22, Murdoch went home to help run the Adelaide News and Sunday Mail.

He learned fast. When a rival daily quietly tried to buy the papers away from him, Murdoch front-paged the offer, accompanying it with an editorial thundering against the evils of press monopoly. When an aborigine was accused of murder on dubious evidence, Murdoch’s papers sprang to his defense; that unpopular act earned his small company a trial and subsequent acquittal on charges of seditious libel.

In short, very quickly Murdoch understood several facts of life if he were to build his dreams. He must retain control of a property. He had to learn the business from the ground up. He had to be fearless - and totally unafraid to speak up for the little guy. (Although doubtless his conservative critics who disagree with him on immigration might disagree with that description.) The formula has served him well. And in the end?  Said Murdoch in 1969: “As proprietor I’m the one who in the end is responsible for the success or failure of my papers.” 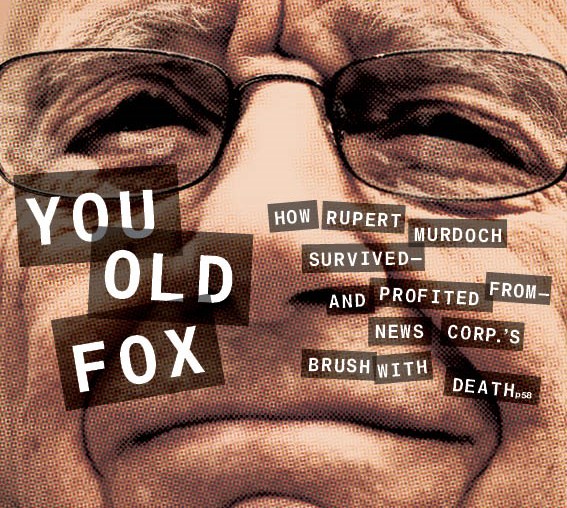 Indeed. And there have been very many, many successes and very few failures. Lately there was no ability for Murdoch to buy Time Warner - one suspecting the liberals over there were just fine with refusing to talk to him, money be damned. They do, after all, own CNN - and Fox News, once disdained by CNN founder Ted Turner, now regularly humiliates CNN. And besides - Murdoch is….Murdoch. The indignity of being swallowed by Rupert Murdoch was just too much. And there have been roller coaster-style, heart stopping moments that would horrify other less steady and steely eyed moguls, on one occasion in 1990 with Murdoch’s entire News Corporation dangling at the beneficence of a Pittsburgh banker.

Yet through it all, Murdoch has simply persisted. His life and the life of his empire have themselves become guaranteed fodder for the likes of left-wing publications like Vanity Fair, the New York lefties who populate that publication routinely filling their pages with the latest saga from Murdoch-land. Roger Ailes is down! Rupert is in trouble! Read all about it! Little of these popcorn-for-the-mind stories turn out to be accurate - but hey. Rupert Murdoch stories sell!

Murdoch has shown the valuable discipline of simply taking the bad with the good and moving ahead. Importantly, he was never afraid of innovating. Or, as he once told his executives, he believed that from time to time it was necessary to make sure he “tears down the walls of this company” to constantly take advantage of the changes brought about by time. One doesn’t create an empire that begins with Australian printing presses and move into a future of global satellites and digital media without realizing that change must be the coin of the realm - or death is certain.

One of the melancholy facts of life is that death is certain - for humans. But not necessarily for companies. And there exactly is the challenge for Murdoch’s sons.

When one looks across the landscape of American companies, what one doesn’t see is as significant as what one does see. The Ford Motor Company and TimeWarner are, in their various incarnations, still here as their respective founders (Henry Ford, Henry Luce and the Warner brothers) would surely have hoped. Even if, in the case of Luce’s Time and the Warner brothers eponymous film company they have merged their fates.  So too have William Paley’s CBS and David Sarnoff’s NBC survived, if each swallowed up by larger media whales -Viacom for CBS and Comcast for NBC.

But as Murdoch needs no reminder, many newspapers are on life-support, the perils of the New York Daily News making frequent headlines lately.  Outside the media business once-upon-a-time giants that were seemingly invincible, from steel companies like Bethlehem Steel to car companies like Studebaker simply, as it were, ran out of creative, financial and managerial gas. These one dominant inhabitants of the American scene are no more.

In other words? Founders of famous and powerful companies inevitably reach the moment where their dream is handed to the next generation - and the next. These transitions from creators and visionaries to inheritors and managers sometimes work - Ford, Time, Warner, CBS and NBC still live (although Time is wobbly.) And sometimes, sadly, they don’t. Heading to the boneyard reserved for once great American visions.

So wither Rupert Murdoch’s beloved News Corporation and 21st Century Fox (the latter itself a legacy of film pioneer William Fox.)? Their fate will be in hands of the next Murdoch generation - sons James and Lachlan. They will be the ones to take their father’s remarkable legacy and move it on into the further reaches of the 21st century.

Will the Murdoch brothers succeed? Can they use the 21st century to position the Murdoch empire for the 22nd?  Time will tell. But, of course, that isn’t the point.

The point is that while the announcement of just how Rupert Murdoch intends to hand off his empire and send it into the future is important, this is a moment to celebrate a larger than life original. A man who took his vision and his dreams and made them real. To the great benefit of his native Australia and his adopted America, not to mention all those gainfully employed thousands in Murdoch ventures across the globe.

And, in the case of Fox News? To the teeth-gritting annoyance of liberals everywhere.