It’s war! Cyber war, that is. Or is it fraud -- cyber fraud? Which should be made punishable by law?

And for once there’s no tale here of some 18-year-old Russian kid hacking into an American chain store or a super secret Mossad/CIA plot to insert the Stuxnet cyber worm into the computers running the Iranian nuclear program.

This time these stories of cyber warfare or cyber fraud are all homegrown. The fingers on the keyboard belong to American leftists and two of the three targets are exactly those you would expect leftist digital warriors of social media to target -- Rush Limbaugh and Fox News. The third, oddly enough, involves the curious tale of the Green Party candidate for governor of Tennessee. 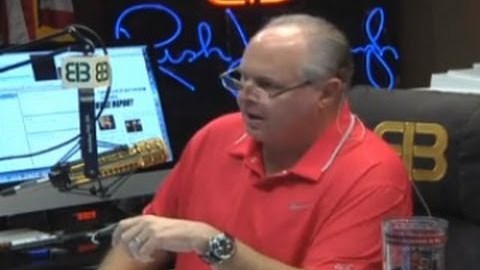 First, the Rush saga, which in fact has been floating around the Net the last couple of weeks and which I touched on briefly in this space the other week.Let’s begin at the beginning. The beginning being the 2012 dustup over Sandra Fluke. As the furor proceeded, over at the American Spectator I spent some time looking into what I came to call The Plot to Get Rush.  Discovering the saga of one Angelo Carusone, then the “Director of Online Strategy for Media Matters for America.” Media Matters, of course, the far-left extremist media guard dog.

At the time the story, the push to get Rush Limbaugh off the air was presented as some sort of spontaneous combustion of rage ignited by his discussion of Fluke and her demands that the rest of us pay for her birth control. Rush’s advertisers were suddenly swamped with demands that they stop sponsoring his show - or so it seemed. Rush’s fans fought back and the whole thing was a bust. But the discovery of importance at the time was that there were no millions of the outraged out there pressuring Rush’s sponsors. In fact, this was all the skillful manipulation of Mr. Carusone, who in fact had been trying to get Rush and other conservatives off the air for years. As I wrote at the time, a full two-years before the Fluke business Carusone had been "hatching the plot to ‘Stop Rush.’ In the world of Internet domains, Carusone even had it registered as ‘Stop rush.org.’”

The plot to get Rush failed, big time. But it had the effect of alerting conservatives that there was in fact a cyber war being waged not only against Rush Limbaugh but other conservative media personalities as well. Now? Now comes a thorough, highly detailed investigation by The Rush Limbaugh Show into the cyber war that is still out there attacking Rush - and the findings are as interesting as they are informative.

In short? Think of the “Stop Rush” campaign as a sort of Potemkin Village tale of cyber warfare. Cyber fraud.The term “Potemkin Village” comes from the tale of Russian Grigori Potemkin, who, in the words of Webster’s dictionary “supposedly built impressive fake villages along a route Catherine the Great was to travel.” The phrase has come to mean “an impressive facade or show designed to hide an undesirable fact or condition.”

In the world of the Stop Rush campaign, what the Limbaugh show’s investigation uncovered was, as it were, a cyber war modeled on the idea of a Potemkin Village. What was presented to Rush’s advertisers was a fraud -- the idea that massive numbers of their customers were demanding that they stop advertising on the Limbaugh show. In fact, exactly as the dictionary defines Potemkin Village, the ‘Stop Rush” effort was presented as “impressive” - when in fact it was all fake. A fraud. Reports the investigation:

“The Stop Rush group claims to be made up of ordinary consumers unhappy with Rush Limbaugh’s comments. The group claims to be “grassroots,” just concerned consumers who won’t shop at businesses that advertise with Rush Limbaugh. In truth, however, there are no potential customers here, just a small number of hardcore political activists founded by Angelo Carusone, EVP of Media Matters for America.

It’s remarkably tiny. Only 10 Twitter users account for almost 70% of all StopRush tweets to advertisers, amplified by illicit software. In addition, almost every communication from a StopRush activist originates from outside the State of the advertiser. Thus, these activists are not and never would have been customers… their only role is to harass small businesses in an attempt to interfere with their operations, as long as they are advertising with Rush.

“A small number of politically motivated out of-state activists are distributing target lists indiscriminately, and annoying small businesses until they give up the advertising deals that help them grow, or risk being unable to conduct business at all. It’s not even activism… it’s blackmail,” according to Brian Glicklich, Rush Limbaugh Show spokesperson.”

The report goes on to note ten facts about the Stop Rush campaign.

In other words? A small handful of far left-wing activists set about deliberately in Potemkin Village-style to commit cyber fraud. Leaving the impression with both Rush’s advertisers and the larger world that they were something that they in fact were not. Actively seeking to “Stop Rush” by making everybody think there are thousands if not millions out there who are demanding of advertisers that they stop advertising on The Rush Limbaugh Show - when in fact, as it were, behind the facade are a literal handful of extremists sitting around in their pajamas tapping furiously on their keyboards.

To draw on another image? Media Matters and all these Stop Rush nuts are today’s political version of this scene from The Wizard of Oz where the “great and powerful Oz” was revealed to be a fraud --  just a guy behind a curtain pulling levers that belched fearsome images and sounds when in fact the whole thing was a fantasy. The Wizard of Oz in fact did not exist - and neither does the reality of the Stop Rush effort.

Yet in the world of cyber warfare, a handful of people in pajamas can in fact make the outside world believe the Wizard or the Potemkin Village is real.

A second example of this was the recent kerfuffle over a comment from Fox’s Eric Bolling and Greg Gutfeld about United Arab Emirates Air Force Major Mariam Al Mansouri. The Major -- that rarity of an Arab woman as fighter pilot -- was celebrated by The Five co-host Kimberly Guilfoyle. As the show was about to end, Bolling joked about “boobs on the ground” and Gutfeld added a comment about whether the Major could park the jet. The inevitable uproar ensued and both men apologized the next day, with Bolling coming back the day after that to apologize a second time.

This wasn’t good enough for a left-wing think tank calling itself the Truman Project. Putting out a haughty “Open Letter to Fox News” that reeked of arrogance after the two men had made apologies, they summoned forth sixty veterans, men and women both, of all services. But mysteriously, the signers were identified only by name and service - as if, once out of the military (or even before they signed up) their lives simply didn’t exist. A check into their identities revealed -- shocker! -- that the list was filled with Democratic candidates or office holders along with activists for this or that liberal cause. Truth in advertising? Not at the Truman Project.

In other  words? As in the “Stop Rush” business, what was being presented to the media and the larger world was a false image. Cyber war, if you will. Conjuring a false image - in the Truman Project case the image of ordinary, non-partisan average veterans who in fact were anything but. The Truman Project was depending on the world of media and social media to swallow the presented tale whole - which in fact, as was true in the Stop Rush campaign - is exactly what happened. The deceptive Truman Project story went everywhere -- unquestioned.

Example three? As it happens, Rush Limbaugh himself noticed this one, mentioning the case
of the Green Party candidate for Governor of Tennessee, one Isa Fange. As seen here at Pundit Press, Ms. Fange “is hiring people to create profiles on social media, such as Reddit. The hired guns pretend to be an average user, then push for her ‘progressive’ agenda.”

As with the Stop Rush campaign and the Truman Project’s “Open Letter to Fox News” the Isa Fange campaign for Tennessee governor was conducting a form of cyber warfare. Presenting as fact something that was not true - in that case so-called “average users” who were in fact hired Green activist typers pushing the “progressive agenda.”

What to make of all of this?

While the world is dealing with the ancient fear of a deadly disease sweeping the globe, various battles in the world of cyber warfare are ongoing. Home Depot gets hacked. Now it’s JP Morgan Chase and some 76 million accounts. Before those two it was Target.  Now the “targets” are shifting inevitably to the world of American politics. If you can’t get Rush Limbaugh off the air -- then plot a cyber war to try and take out his show. You hate Fox News? Use an impromptu and apologized-for comment on a Fox show to gin up the impression that a list of veterans is sincerely furious and going after Fox News as a result. Meanwhile hiding the real identity of the signers who have decided partisan axes to grind. You want to be governor of Tennessee? Hop on the Internet and make Tennessee voters think average folks out there are mysteriously all in agreement with your Green Party views.

All of this is, of course, deliberately deceptive. A fraud. Designed to make Americans think something is true. when in fact it is, as they say, as phony as a three dollar bill. The question now is whether Americans, specifically the media, will wake up to the facts of manipulation behind this kind of cyber warfare.

In the real world, there is nothing new about deceiving an enemy. Whether the invading force is the Nazis swarming across the Polish border in 1939 or terrorists plowing airliners into buildings in 2001, it’s easy to spot a war. After the fact for sure if not always ahead of time. Cyber warfare is harder to cope with, as its warriors doubtless fully understand. The target may never see it coming, and unless one takes the time to investigate the particulars, a fraudulent attack may succeed before it is even understood that what just happened is in fact a scam.

What The Rush Limbaugh Show investigation has accomplished here goes well beyond an investigation of the attack by the Stop Rush activists themselves.  What is illustrated in detail is exactly how the American Left has adapted cyber warfare to achieve its objectives. And doing deliberately, willfully - and fraudulently.

Without question this is only the beginning of this kind of thing. What is the response? The kind of hacking that has been done to JP Morgan Chase or Home Depot or Target is in fact illegal -- although the idea that one can necessarily track down a specific perpetrator is questionable. Particularly if that perpetrator is sitting somewhere half way around the globe.

But domestic cyber warfare? The question arises now as to whether Media Matters and others like the Truman Project or the wannabe Tennessee governor who falsely present themselves to advertisers and the media at large should be prosecuted in the future. With laws written that make what they’ve been doing a case of cyber fraud, not unlike identity theft. And thus a target for law enforcement. With the targets able to sue for damages.

Wouldn’t that be ironic? Rush Limbaugh suing Media Matters? There wouldn’t be enough popcorn to watch that court case. Streamed on the Net, of course.