Perhaps you've seen it -- the photo of Noah Galloway, a double-amputee veteran of the Iraq war and crowd-pleasing contestant on Dancing With the Stars, with this caption -- "Caitlyn Jenner won the Arthur Ashe Courage Award. The runner up was this guy: Army Veteran Noah Galloway, who lost an arm and leg to a roadside bomb in Iraq, and now competes in Crossfit events, runs marathons, and competed in the 58-hour Death Race."

The photo went viral across social media after ESPN announced on Monday that it will present an ESPY Award to '76 Olympic decathlon winner, Kardashian stepdad and miracle of makeup artistry formerly known as Bruce Jenner. 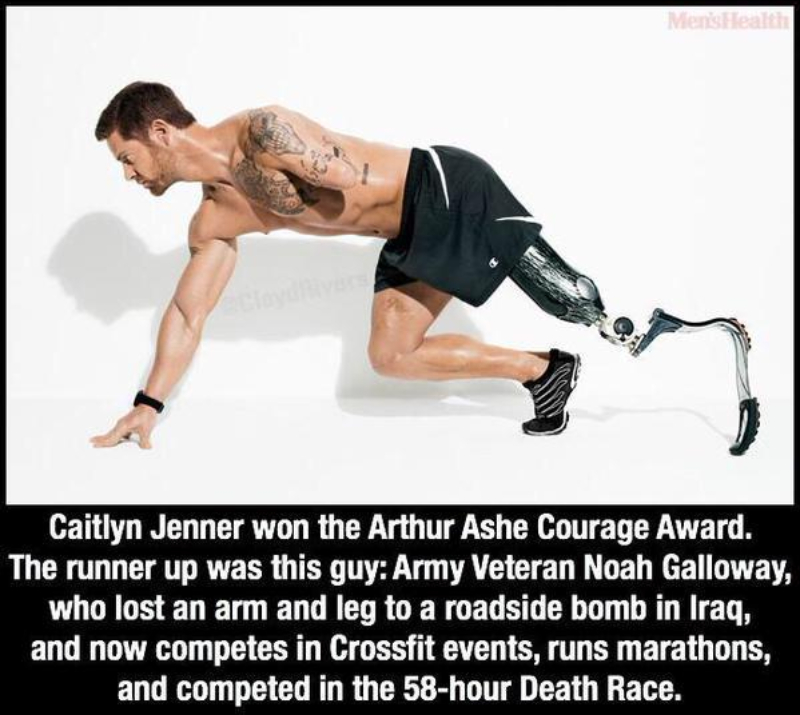 The claim is baseless, several media outlets quickly claimed. The rumor debunkers over at Snopes traced it back to Boston radio host and columnist Gerry Callahan, who tweeted the photo of Galloway and wrote beneath, "Caitlyn Jenner wins Arthur Ashe Courage Award. And the runner-up is ..." -- an obvious example of sarcasm.

Once the meme swept across Twitter, Facebook and Instagram (at last count Callahan's snark was retweeted nearly 10,000 times), other skeptics cited another more deserving recipient for the award -- Lauren Hill, the late college basketball player whose determination to keep playing as she battled brain cancer inspired people around the world.

Once the uproar became too noisy to ignore, ESPN responded with the following statement --

The Arthur Ashe Courage Award is meant to honor individuals whose contributions transcend sports through courageous action. Sometimes that courage is demonstrated over the course of a lifetime and sometimes it is demonstrated in a single act that shines a light on an important contemporary issue. At all times, there are many worthy candidates. This year, we are proud to honor Caitlyn Jenner embracing her identity and doing so in a public way to help move forward a constructive dialogue about progress and acceptance.

O-kay -- but it's disingenuous for the Washington Post to tut-tut that "No, Caitlyn Jenner was not picked ahead of Noah Galloway for the ESPY award for courage." Since Jenner was chosen and Galloway wasn't, one risks stating the obvious to point out that, yes, Jenner was selected "ahead" of Galloway.

After all, Jenner did not publicly announce that he no longer deemed himself male until he was interviewed by ABC's Diane Sawyer in late April. This was two weeks after Lauren Hill died at age 19. By then, Galloway was well-known around the country for his spirited efforts on Dancing with the Stars, where he eventually finished in third place.

ESPN is unlikely to admit this now but as of mid-April, Galloway and Hill must have been in the running for the award. The alternative -- that neither was being considered -- is least palatable of all. It would prove that those at the network tasked with choosing award recipients haven't a clue about actual courage -- such as when a young woman stays in the game while staring death in the face, or when a soldier sacrifices limbs for the sake of his country and competes in a dance contest after coming home.