On Charlie Rose Show: 'The Year After He's Out People Are Going to Miss Obama' 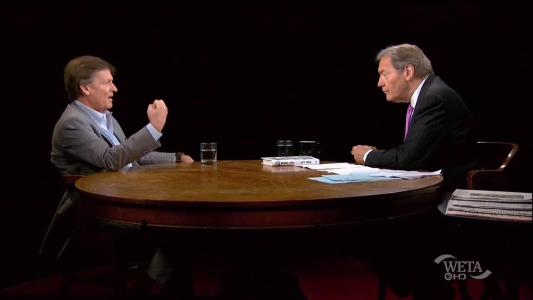 Ever wonder what a typical cocktail party conversation among liberal elites on the upper East Side sounds like? Probably a lot like the conversation Charlie Rose had, on Thursday, with Moneyball author and former New Republic editor Michael Lewis when he offered excuses for Barack Obama’s unpopularity.

When Rose asked the current Bloomberg View columnist why Obama had become “such a liability” to the Democratic Party in this 2014 election cycle, Lewis responded that it was “unfair” and then predicted: “I think history is going to be very kind to him...the year after he’s out people are going to miss him.”

Lewis also blamed Obama’s current unpopularity on Americans just looking for a scapegoat for their unhappiness: “People, when they’re unhappy, they blame the President.” Lewis added that the American people are “Not sitting where he’s sitting, seeing what he’s seeing. They don’t see the complexity of the decisions he’s gotta make. And I think that a lot of what’s wrong in the world is not, it’s not actually his fault.”

Lewis then told Rose: “I feel like I’m happy the country is in his hands. I think his heart’s in the right place. I think he’s really smart.”  The ex-New York Times magazine writer also emphatized with the President: “He’s got disadvantages for someone in that office and one of them is his temperament. He’s got the temperament of a writer - more than a politician. He’s really not that interested in you. He’s, he’s interested in justice.”

The following is a transcript of the conversation as it was aired on the October 29 edition of PBS’s Charlie Rose show:

CHARLIE ROSE: Speaking of the presidential campaign what do you make of the fact that the principal issue in this campaign is a man you profiled for Vanity Fair, President Obama?

MICHAEL LEWIS, BLOOMBERG VIEW, COLUMNIST: Oh it’s, you know, so what do I think about the fact that he’s, he’s become -

LEWIS: - such a liability to his party?

ROSE: Did he bring it on himself do you think?

LEWIS: I think history is going to be very kind to him.

ROSE: Or do you think it’s unfair? Do you think he brought it on himself? Do you -

LEWIS: Yeah it does. Yeah I think it’s mainly unfair. But people, when they’re unhappy, they blame the President. And I think - so you ask what books I want to write?  I’ll tell you what book I want to write. I want to move into his life the last year of his presidency and write a book about presidential decision-making that will come out after he’s president, after he’s done. And I have a feeling by the time - and one of the reasons I think that the book would work as opposed to - I think it will work as a literary project.

LEWIS: I think it’s a wonderful way to get at him and also the office. But I bet - I predict the year after he’s out people are going to miss him. That’s what I think.

LEWIS: Because I think they’re gonna - I think that people that are not -  they’re not sitting where he’s sitting, seeing what he’s seeing. They don’t see the complexity of the decisions he’s gotta make. And I think that a lot of what’s wrong in the world is not, it’s not actually his fault.

ROSE: Yeah but it’s his responsibility to respond to it in the smartest possible way.

LEWIS: Yeah and I think his mistakes are under- to the extent when he’s made mistakes I understand them. I feel, I’ll tell ya how I feel because I’m not a political person really. I don’t, I don’t spend a lot of time thinking about it. But I feel like I’m happy the country is in his hands. I think his heart’s in the right place. I think he’s really smart. He’s got, he’s got disadvantages for someone in that office and one of them is his temperament. He’s got the temperament of a writer - more than a politician. He’s really not that interested in you. He’s, he’s interested in justice.

ROSE: One of the closest people to him in the first six years said to me just that. I said what is he going to do? She said, “I think he’s going to write. That’s what he really is - a writer.”

LEWIS: I think that’s right. It’s really odd he’s in office because he isn’t - most people, politicians when you sit down with them, you sense right away they’re a political type of person. And what they’re doing - one way or another they’re seeking to flatter you, get inside of you? Right?

ROSE: Nobody ever said Bill Clinton is a writer.

ROSE: They know he’s a politician to his core.

LEWIS: Obama is watching you. Obama is - and he’s completely neglecting his responsibility to flatter you. In that he will forget - he just, he’s not part of it. He doesn’t want, he doesn’t want to go - that’s what he wants. He wants - he likes relationships between equals. He’s not manipulative. And that all hurts him. So I think he’s - there are things about him that make him ill suited for the job but I’m glad he’s in the job. Writers should have their, their shot at it every now and then. Right? Once every hundred years you put a writer in there.

ROSE: So you too could be president.

LEWIS: No, no. Because of him I’ll never be. He’s ruined it for us!

ROSE: He’s ruined it for writers, has he? Has he agreed to the project?

LEWIS: He was interested in it. I mean he may say no.

ROSE: It’s you or David Remnick. I mean you’re the kind of people they like. You and Remnick and -

LEWIS: He may say no. If he says no he says no and I’ll write about something else. But I think, I think it’s just -

LEWIS: The, the - I don’t see the down side. And I think that the world benefits from an inside view of that office. Like what the? We don’t judge - we really have good ways of judging or evaluating presidents.

ROSE: I think, I mean I can’t wait to read the damn book.

LEWIS: It’s a bit like judging baseball managers. Baseball managers have very little control over games. A lot of what happens on the field happened in the general manager’s office when they decide who to put on the field. The manager has like a, you know, a dial he can turn and maybe affects it a little. And then he takes all the blame and all the credit for the game. It’s crazy. So I feel it’s a bit that way.