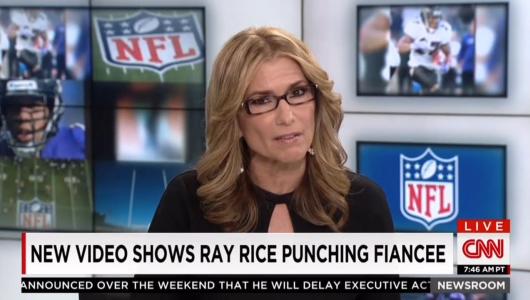 UPDATE: Carol Costello apologizes to the Palins. Via Politico: “Over the past few days I have been roundly criticized for joking about a brawl involving the Palin family. In retrospect, I deserve such criticism and would like to apologize,” Costello said in a statement to POLITICO.

When video of Ray Rice punching and then dragging his fiancé around on the floor was released, CNN’s Carol Costello justifiably called it “disturbing” and “insane.” But when Costello played the audio of a different woman recounting a similar horrifying experience of being assaulted and dragged around by a man, she told her audience: “Sit back and enjoy.”

The difference? The woman in question happened to be the daughter of favorite liberal hate object and former Republican vice presidential candidate Sarah Palin.

On the October 22 Newsroom, the CNN anchor said of the audio of Bristol Palin describing a physical and verbal assault: “I’m just going to come right out and say it. This is quite possibly the best minute and a half of audio we’ve ever come across...Sit back and enjoy.”

On Wednesday, Costello even teased the audio on her twitter feed at 9:45am: “This is quite possibly the best minute and half of audio we’ve come across in a long long time.” #PalinBrawl.

Despite receiving criticism from various outlets, Costello has yet to apologize for her insensitive remarks on her twitter feed or on the October 23 edition of CNN’s Newsroom.

“Okay. I’m just going to come right out and say it. This is quite possibly the best minute and a half of audio we’ve ever come across – well, come across in a long time anyway. A massive brawl in Anchorage, Alaska reportedly involving Sarah Palin’s kids and her husband. It was sparked after someone pushed one of her daughters at a party. That’s what Bristol Palin told police in an interview after the incident. And now police have released audio of that interview. It does include some rather colorful language from Bristol. Here now is Brisol’s recollection of how that night unfolded. So sit back and enjoy.”

Costello went on to play an audio clip of Bristol Palin describing the violent assault:

BRISTOL PALIN: My little sister comes over to me and some old lady just (expletive) pushed me. She just hit me. Oh (expletive) no. No ones gonna touch my sister.

COP: Where was this at?

COP: Ok, where are you injured at?

PALIN : My (expletive) knees, my face. Where’s my (expletive)? I have a 5-year-old in the car... She’s 20-years-old. A guy comes out of nowhere and pushes me on the ground, takes me by my feet in my dress, in my thong dress in front of everybody. Come on you (expletive), get the (expletive) out of here. I don’t know this guy. I’ve never seen this guy in my life. (expletive)

COSTELLO: I think that long beep was my favorite part.

Back on the September 8 edition of CNN’s Newsroom, Costello took a much more appropriate tone when discussing the video of Rice dragging around his unconscious fiancé:

CAROL COSTELLO: There is disturbing video out this morning of suspended NFL running back Ray Rice. I’m going to show it to you and, as I mentioned, it is disturbing. The video was posted by TMZ from inside an Atlantic City elevator the night Rice and his then-fiancee were involved in a domestic dispute. All right. You see them going into the elevator. I’m just going to let you watch. It’s insane.

All right, now here’s the most disturbing part to me. So after Ray Rice decks his then-fiancee, he drags her unconscious out of the elevator. The doors closed. Darn, he says, so he drags her out, throws her face down on the floor and then he picks up her shoe and -- because I guess he wants the elevator doors to close, right? Doesn’t pull down her skirt which is disturbing to me and at no point does it appear where he bends down and says baby, are you all right? It’s just insane to me....And even though the NFL instituted new punishment for domestic violence, Ray Rice’s suspension stands. I don’t know how I can watch a game involving the Baltimore Ravens and watch him.