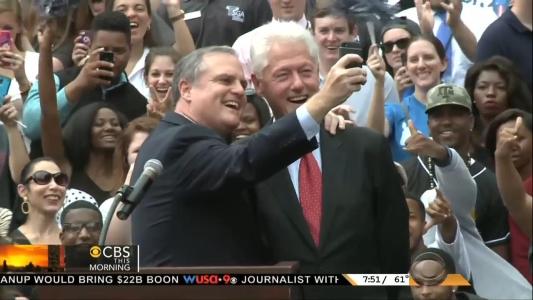 On Tuesday’s CBS This Morning, co-anchor Gayle King was charmed by Democratic Senate candidate Mark Pryor’s selfie with Bill Clinton as she effused: “Everybody likes a selfie.”

However King, nor anyone else at CBS, has yet to report on the Arkansas Senator’s response to a basic question about ebola that was so awkward it went viral and even caused MSNBC’s Mika Brzezinski, on Tuesday's Morning Joe, to shout: “Stop it!” four times before she ridiculed: “A sweet, little, nice, gentle question, and the guy just collapsed!”

The following transcript is from the October 7 edition of CBS’s This Morning:

GAYLE KING: Arkansas Democratic Senator Mark Pryor is having trouble framing his re-election campaign. So he turned to a famous former governor for help during a campaign stop on Monday.

KING: (inaudible) Says “Hold on, hold on.” And off it went to Pryor’s campaign twitter feed. He’s locked in a tight race that will help determine control of the Senate. Everybody likes a selfie. It’s here to stay.

NORAH O’DONNELL: Yeah and Bill Clinton is apparently one of the rare Democratic surrogates that could actually make a difference in that race.

KASIE HUNT: Do you think that the Obama administration has done an appropriate job handling the Ebola crisis?

MARK PRYOR: Uuuuuuuuummmmmmmm. I would say that it’s hard to know because I haven’t heard the latest briefing on that to know all -- I read the paper and all. But my impression is that we have people over there, both from the CDC [Centers for Disease Control and Prevention] and other medical-type people and even some engineers to try to build, you know, medical facilities. That’s what they need over there. They need the medical infrastructure.