Charlie Rose to Bill Clinton: You Are the 'Best Political Animal That's Ever Been' 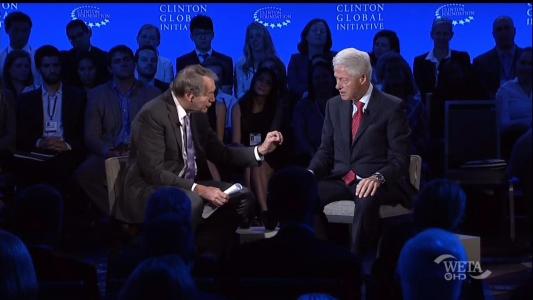 Charlie Rose’s interview with Bill Clinton at his own Clinton Global Initiative summit was, not surprisingly, full of easy questions but the PBS host saved his loftiest softball for the end when he called Clinton the “best political animal” of all time.

In closing his interview, aired on the September 26 edition of PBS’s Charlie Rose show, the host couldn’t resist heaping this last bit of praise onto the impeached President:

CHARLIE ROSE: So I close with this - there is no one I know in politics from the left, the right, Republican, Democrat, male or female that doesn’t say Bill Clinton is the best political animal that’s ever been in American politics and certainly in - for as long as they can remember. Tell me what you think that’s about? Why does everybody have that opinion of you as a political person?

BILL CLINTON: Well, some of the people who refer to me as an animal think I should be in a zoo.

CLINTON: And some of them acted as if I actually was in a zoo. No, I think -- look, I don’t know if it`s true or not, but, to be really good at this, you’ve got to like people. You`ve got to like policy. And you gotta like politics. You’ve got to have a pain threshold. You have to understand, there’s a reason this is a contact sport.

Earlier in the interview Rose gave Clinton the opportunity to whine about how he was treated by Republicans and yes even the media during his presidency:

CHARLIE ROSE: For you, what is the biggest misconception about the Clinton presidency?

BILL CLINTON: I don’t know but they’re about to get it right now, according to all these surveys. But I think that, I think most people underappreciate the level of extreme partisanship that took hold in ‘94.

ROSE: Even greater than has been for President Obama?

CLINTON: I wouldn’t say greater. But you know nobody’s accused him of murder yet, as far as I know. I mean it was pretty rough back then. And that kind of - the way the institutions of American life, including the way the media covered politics was basically rigged -- designed -- rigged sounds unsavory -- designed to promote conflict over cooperation to an extent that was, you know, not healthy for our country.

ROSE: But has that gotten worse or better? Or different?

CLINTON: Well it’s, the politics, I think, by parties are probably even more polarized than they were then because the people have been polarized, in part, by being Balkanized. Now part of it is congressional reapportionment and all of that. But part of it goes beyond that. I mean if you -- if you look at these Pew studies which show that we want to be around physically and virtually -- that is with our television viewing and our Internet viewing -- people who agree with us, and we don’t much care to spend any time with people who don’t.

ROSE: Meaning we have to listen to and hear people who have the same opinion...

CLINTON: Yeah, I tell everybody all the time America’s made such progress. We’re less racist, sexist and homophobic than we used to be, we just don`t want to be around anybody that disagrees with us.