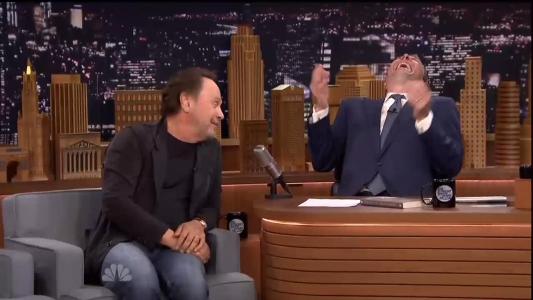 On Thursday’s Tonight Show with Jimmy Fallon comedian Billy Crystal reminisced about Robin Williams and recounted a hilarious moment, way back in 1988, when his longtime friend and fellow Democrat realized they had a stinker on their hands with presidential candidate Michael Dukakis.

The following is a transcript of the segment as it was aired on the September 19 Tonight Show with Jimmy Fallon:

BILLY CRYSTAL: And he was fearless and, you know, that was what I loved about him so much and his commitment to the comedy was astounding. And we were in Boston, it was 1988, it was like the second Comic Relief. And we’re at the state building with Michael Dukakis, who was the Democratic nominee to run against George Bush Sr. Right? And Mr. Dukakis was a very genteel, not a large man, very quiet, professor - professorial type guy.

CRYSTAL: And very conservative. And, and we made our speeches and we were funny. Whoopi, Robin and I were, you know, pretty funny. And then Mr. Dukakis said something about Robin being out in the universe. Up there, you know, right near Uranus. Well that’s-

FALLON: Oh no! Does he know who he’s playing with?!

CRYSTAL: That’s all, that’s all he had to hear.

CRYSTAL: So, he went off on “Your anus, my anus, our anuses! Oh my God, whose anus is it? Oh my!” And it - and Dukakis looked at him and just went “This isn’t HBO.”

CRYSTAL: So he continued the speech and Robin stands next to me. And as Dukakis is droning on, Robin says “No way this mother [bleep] wins.”