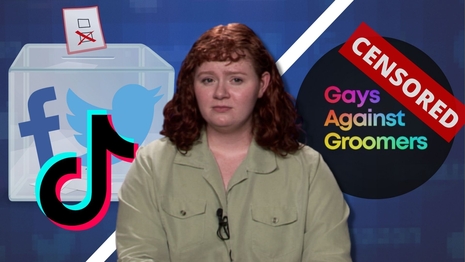 Get ready for some déjà vu. The same platforms that censored the New York Post Hunter Biden scandal stories before the 2020 presidential election are cranking up the censorship machine leading up to the 2022 midterms.

This week’s episode of CensorTrack with Paiten looked at Big Tech’s latest efforts to silence so-called “misinformation.” And on this week’s Censorship Spotlight, Twitter, Wix and Linktree silenced Gays Against Groomers for calling out the sexualization and abuse of children.

The Chinese Communist Party (CCP)-tied TikTok launched its Elections Center to help preserve its vision of “election integrity.” The platform committed to removing content that it claims violates its “Community Guidelines,” including alleged “election misinformation” or election-related “harassment.”

Meta — Facebook’s parent company — announced a 2022 midterm election strategy that appeared to take cues from the federal government. Meta claimed it is “preparing for different scenarios” by “working with federal government partners including the FBI and the Cybersecurity and Infrastructure Security Agency, as well as local and state election officials and industry peers.”

Through its “prebunks,” Twitter claimed it would work to “get ahead of” so-called “misleading narratives” by placing notices directly on people’s timelines and search pages.

This should be obvious, but American companies should not align with Chinese companies’ election practices.

Election-related censorship wasn’t the only Big Tech practice of concern this week.

Twitter, Wix and Linktree attempted to silence Gays Against Groomers’ online accounts. The group’s crime? Calling out the sexualization and abuse of children for what it is: evil.

As our unique CensorTrack database documented, Twitter, Wix and Linktree repeatedly restricted and suspended Gays Against Groomers’ accounts. Linktree is a platform that generates a listing of links to all of a user’s social media accounts and promotions in one place.

Linktree excused the censorship as a violation of the platform’s “hate speech” policy, while Wix suggested it was an “investigation of a phishing complaint.” Twitter chalked it up to a convenient “mistake.” On one occasion, Twitter provided no reason for suspending Gays Against Groomer’s account.

It appears that Big Tech only values groups that fall in line with its leftist agenda.

Gays Against Groomers founder Jaimee Michell told MRC Free Speech America, “In our instance, it is clear that big tech prioritizes the feelings of child predators and abusers more than gay people’s right to speak. It’s shocking in this day and age that an organization of LGBT people would be silenced.”

The  CCP-esque censorship policies in the run-up to the 2022 midterm and the censorship of Gays Against Groomers are just a few of the latest examples of Big Tech’s undeniable leftist bias.

Watch below for the first episode of CensorTrack with Paiten! We encourage you to post and share it across all social media. If you have been censored, contact us at www.CensorTrack.org, and use #FreeSpeech to point out more of Big Tech’s unacceptable bias.

Check out our recent episodes: