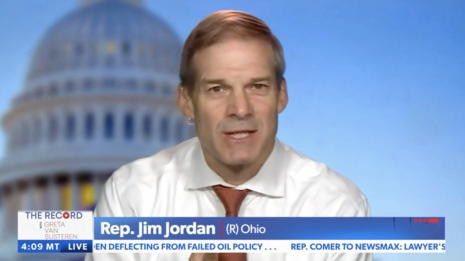 "The left doesn't value the First Amendment the way they used to,” Jordan continued. “Today, if you don't agree with the left, you're not allowed to talk. And if you try, they're going to call you a racist and they're going to try to cancel you."

When asked if he thought McCarthy misspoke, he said, “I don't think it’s a slip at all.” He added, “Even if Joe Biden wanted to do good things and change policies to help change some of the crazy things they’ve done, I don’t think the left would let him. They’re in complete control of the [Democratic] party and part of their objective is to stifle the speech and use government to go after their political enemies.”

Jordan referenced the Hunter Biden laptop story as an example of the Biden Administration's and media’s repeated attempts to crack down on free speech. "I mean, first of all, if you said the Hunter Biden story was real, which it turned out to absolutely be real, you were called a conspiracy theorist and Big Tech went after you," he said.

McCarthy asking Big Tech to censor Americans “is scary stuff,” Jordan said.”It’s why the American people are so frustrated.”

Conservatives are under attack. Contact your state representatives and demand that Big Tech be held to account to mirror the First Amendment while providing transparency, clarity on “hate speech” and equal footing for conservatives. If you’ve been censored, contact us at the CensorTrack contact form, and help us hold Big Tech accountable.