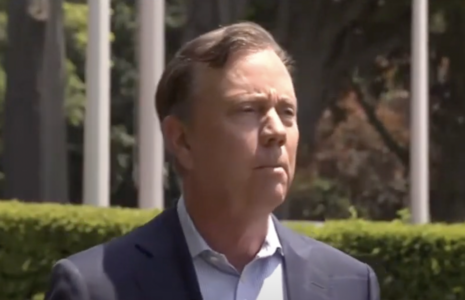 While most conservatives would be encouraged by the prospect of states taking it upon themselves to enact certain policies, the encouraging part ends when a state creates a position within their government that looks to be a check on the people and their level of freedom.

The state of Connecticut is looking to pay some authoritarian $150,000/year to head up what sounds like it’s shaping up to be their own version of the Department of Homeland Security's (DHS) Disinformation Governance Board, also popularly known as a “Ministry of Truth.”

And of course, with Connecticut Gov. Ned Lamont (D) is funding the operation while Secretary of State Denise Merrill (D) overseeing the operation, the state wants the position to be filled as soon as possible so they can influence the information that might come out before the 2022 midterm elections.

According to The New York Times:

Concerned about a similar deluge of unfounded rumors and lies around this year’s midterm elections, the state plans to spend nearly $2 million on marketing to share factual information about voting, and to create its first-ever position for an expert in combating misinformation. With a salary of $150,000, the person is expected to comb fringe sites like 4chan, far-right social networks like Gettr and Rumble, and mainstream social media sites to root out early misinformation narratives about voting before they go viral, and then urge the companies to remove or flag the posts that contain false information.

All of that information should be very telling, because — by the logic given above — they don’t seem to be concerned in the least with any “misinformation” coming from left-leaning sources or organizations.

Nope, not biased at all.

“Misinformation can erode people’s confidence in elections,” Connecticut Deputy Secretary of State Scott Bates said, “and we view that as a critical threat to the democratic process.”

You have to be fluent in BS to understand the words of a bureaucrat, and whenever someone on the left — or a RINO, for that matter — talks about “the democratic process,” what they’re really referring to is the mission of the Democratic Party — or the “Uni-Party,” if you want to go there.

The New York Times also noted that other states are beginning to take measures “meant to spread accurate information about” multiple issues they claim to be concerned with.

Oregon, Idaho and Arizona have education and ad campaigns on the internet, TV, radio and billboards meant to spread accurate information about polling times, voter eligibility and absentee voting. Colorado has hired three cybersecurity experts to monitor sites for misinformation. California’s office of the secretary of state is searching for misinformation and working with the Department of Homeland Security [DHS] and academics to look for patterns of misinformation across the internet.

Here’s the question I’ll leave you with. If states, like California, are working with DHS to essentially do the same thing that the aforementioned Disinformation Governance Board would’ve done on a nationwide basis, how do actions like these not eventually get turned over to federal agencies — or the dreaded Ministry of Truth?