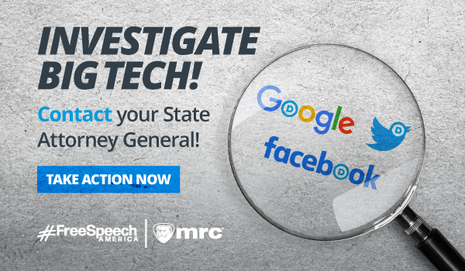 Media Research Center President Brent Bozell and conservative leaders on Tuesday released a letter to the Attorneys General of the states calling for an investigation into whether Big Tech companies like Twitter, Facebook, Google and YouTube are in violation of the Consumer Protection Statute in the state.

“The CEOs of Google, Facebook and Twitter have repeatedly alleged their platforms are neutral forums for political speech and that they support an equal exchange of ideas. The actions by these tech companies, however, prove those claims are patently false. Conservative speech is under attack. Countless conservatives, former President Trump included, have been censored or outright banned on these platforms for simply expressing their beliefs.”

“We cannot allow Facebook, Google and Twitter to continue to deceive the public with lies about the political neutrality of their products. We’re urging Americans who believe in preserving free speech to contact their state attorney general and request they investigate these companies for their deceptive trade practices.”

The MRC will be sending physical letters to all 50 state AGs. For more information on the effort, go here. See below for the full letter:

We, the undersigned, respectfully request that, in your capacity as Attorney General of Texas, you initiate an investigation to determine if Twitter, Facebook, and Google/YouTube violated the consumer protection statute in the state of Texas by engaging in deceptive trade practices. Specifically, Twitter, Facebook, and Google/Youtube may have knowingly and intentionally violated their terms of service by publicly claiming their services were neutral platforms when in fact they are not. Consider the following claims made by the CEOs of these companies in sworn testimony:

Twitter: In his testimony to the U.S. Senate Committee on Commerce, Science, and Transportation, Twitter CEO Jack Dorsey stated that, “Twitter’s purpose is to serve the public conversation. People from around the world come together on Twitter in an open and free exchange of ideas...We must ensure that all voices can be heard, and we continue to make improvements to our service so that everyone feels safe participating in the public conversation—whether they are speaking or simply listening.”

Facebook: From a 2020 CNBC interview Facebook CEO Mark Zuckerberg, proclaimed: “I don’t think that Facebook or internet platforms in general should be arbiters of truth.” “Political speech is one of the most sensitive parts in a democracy, and people should be able to see what politicians say.”

Google: CEO Sundar Pichai emphasized that Google & YouTube are both neutral platforms, “We are equally committed to protecting the quality and integrity of information on our platforms, and supporting our democracy in a non-partisan way… Let me be clear: We approach our work without political bias, full stop. To do otherwise would be contrary to both our business interests and our mission, which compels us to make information accessible to every type of person, no matter where they live or what they believe.”

Consider the following public evidence, however, that contradicts the claims made by the social media CEOs that Twitter, Facebook, and Google/YouTube are open and neutral communications platforms:

Google: Google has targeted conservative platforms, like the Federalist and PragerU  on its search platform and its sister video platform, YouTube, has done the same. Google threatened to demonetize The Federalist and severely limit the reach of PragerU, an influential conservative organization which utilizes videos to spread conservatives ideals. Following Twitter’s lead, Google/YouTube has also suspended President Trump’s entire YouTube channel. Lastly, Parler, the alternative social media platform to Twitter, is banned from the Google Play store: anyone with an Android phone cannot download the application.

Facebook: From March 1, 2020 through Election Day, Facebook removed more than 265,000 pieces of content and displayed warnings on 180 million pieces of content relating to the presidential election. These removals were taken down on the basis that the content violated Facebook’s voter interference policies. During this election cycle, Facebook constantly added new rules for election posts, froze political ads, and censored hashtags like #sharpiegate and #stopthesteal. By reducing the reach of these posts, Facebook has been picking and choosing who will be allowed to have a voice on the platform and who will not. Facebook also announced it intentionally limited distribution of a New York Post bombshell exposé on Hunter Biden’s alleged questionable dealings with foreign officials before the election. And as of January 12th, Facebook is censoring ALL mention of the term “Stop the Steal” on their platforms.

If these organizations have indeed engaged in these types of patterns of behavior, then their business practices fly in the face of what they represent their platforms to be. Facebook, Google and Twitter are willfully and knowingly misrepresenting the nature of the services they are offering to the public. They claim they are platforms free from political bias, but that is unequivocally not the case. In fact, during a Senate hearing in October 2020, both Twitter and Facebook claimed that they censored liberal accounts as much as conservatives. When asked to provide an example of liberal accounts they censor, neither Facebook’s Zuckerberg nor Twitter’s Dorsey could come up with a single example.

The users of these platforms give away their private information and engage in the use of these platforms with the understanding that their engagement will not be censored, nor will others. Further, those who use the platforms for commercial purposes also buy services from the platforms to promote goods and services, with the clear and reasonable expectation that these platforms are what they say they are. Google/ YouTube, Twitter, and Facebook therefore all appear to be engaging in deceptive trade practices and as with all other 49 US states, they are open to investigation in your state under your state’s consumer protections laws.

We the undersigned, representing millions of Americans who have felt firsthand the deceptive bias of these platforms respectfully request that you initiate an investigation into these companies. We believe that these acts provide reasonable cause for you to use your enforcement mechanisms for the investigation of this issue in your state.

Amazon, Twitter, Facebook, and Google YouTube have unparalleled power in our modern society. Consider the fact that these platforms undeniably played a key role in swaying the election to make Joe Biden president of the United States.[5] But in addition, they also have an oversized impact on shaping our society and indeed our commerce. This is not a partisan issue. As the Attorney General of the state of Texas, you owe it to the citizens of your state to investigate the harmful and fraudulent trade practices of these deceptive platforms.

We look forward to watching your progress on this issue.

Campaign for the American Future

Students for Life of America

Students for Life of America