Cruz CALLS OUT Facebook for Censoring ‘On Behalf’ of Gov’t, Says Good Argument Its Actionable 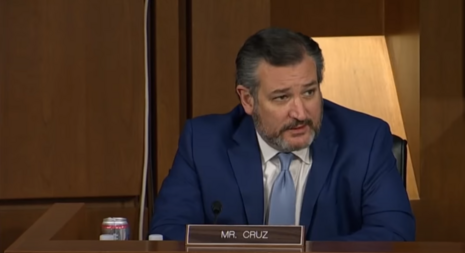 Facebook’s insane censorship practices have continued for long enough for at least one Republican senator.

Sen. Ted Cruz (R-TX) bashed Facebook’s hypocrisy regarding COVID-19 and its origin on the Fox News show Sunday Morning Futures. “[T]hese latest breakthroughs have real consequence because it now is clear that Facebook was operating at the direction of and in the direct benefit of the federal government and operating as the government's censor, utilizing their monopoly position to censor on behalf of the government,” Cruz told host Maria Bartiromo.

Cruz argued that Facebook users who were censored for posting about the Wuhan lab leak theory may have a case for recourse against the platform: “If you went out and posted the facts that led a year ago to the very strong likelihood that the COVID virus escaped from a Chinese government lab in Wuhan, China — if you posted that a year ago and they took it down — I think there’s a very good argument you have a cause of action against Facebook.”

Facebook CEO Mark Zuckerberg corresponded with Dr. Anthony Fauci, the Director of the National Institute of Allergy and Infectious Diseases (NIAID), as far back as March 2020. The correspondence was revealed in a collection of thousands of emails that were recently released via a Freedom of Information Act request.

Zuckerberg told Fauci, according to the released emails, “This isn't public yet, but we're building a Coronavirus Information Hub that we're going to put at the top of Facebook for everyone.” Part of the email chain between Zuckerberg, Fauci and Courtney Billet, the Director of Communications and Government Relations for NIAID, is blocked out, but it alluded to an “offer” from Zuckerberg.

Early in the pandemic, Facebook and its fact-checkers censored claims that COVID-19 was manufactured in a laboratory in Wuhan, China.

However, the platform later reversed course, and confirmed that it would no longer censor the Wuhan laboratory theory in light of new information. “In light of ongoing investigations into the origin of COVID-19 and in consultation with public health experts, we will no longer remove the claim that COVID-19 is man-made from our apps,” a Facebook spokesperson told MRC Free Speech America in a statement. MRC president Brent Bozell said in a tweet: “Facebook, which claims to be fighting ‘misinformation’ essentially admitted today that THEY have been spreading misinformation for over a year. Yet another reason to remove the protections Facebook and others receive from section 230.”