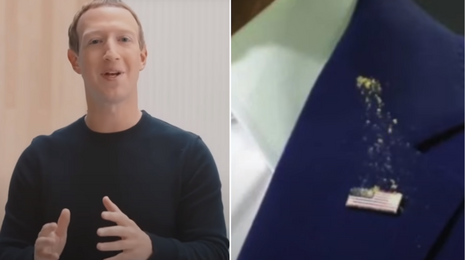 The hypocrisy of Facebook’s fact-checking partners knows no bounds. In an act of discrimination against the Media Research Center, a Meta platform fact-checking partner threw a fit after MRC’s video division, MRCTV, dared to write about a video that showed President Joe Biden getting smacked with a white or yellow substance, depending on the photo or video.

MRCTV managing editor Brittany Hughes published a piece April 13 headlined, “Yes, a Bird Just Crapped On Biden During a Speech.” Hughes quipped that “It appears a bird proceeded to crap on Joe Biden while the president was speaking in Iowa Tuesday, dropping a big, dripping pile of poo directly on Biden’s shoulder in full view of God and everyone.”

“False information,” cried Facebook in a filter it slapped over MRCTV’s post of Hughes’ blog. The platform linked out to an absurd article by left-wing fact-checker PolitiFact that tried to protect biden. Facebook in turn canceled MRCTV, restricting its account and reducing its page quality for at least 90 days for supposedly having “repeatedly shared false information.” Oh, please. MRCTV received previous “missing context” flags, which are supposedly not supposed to hurt the quality of its page but did anyway. 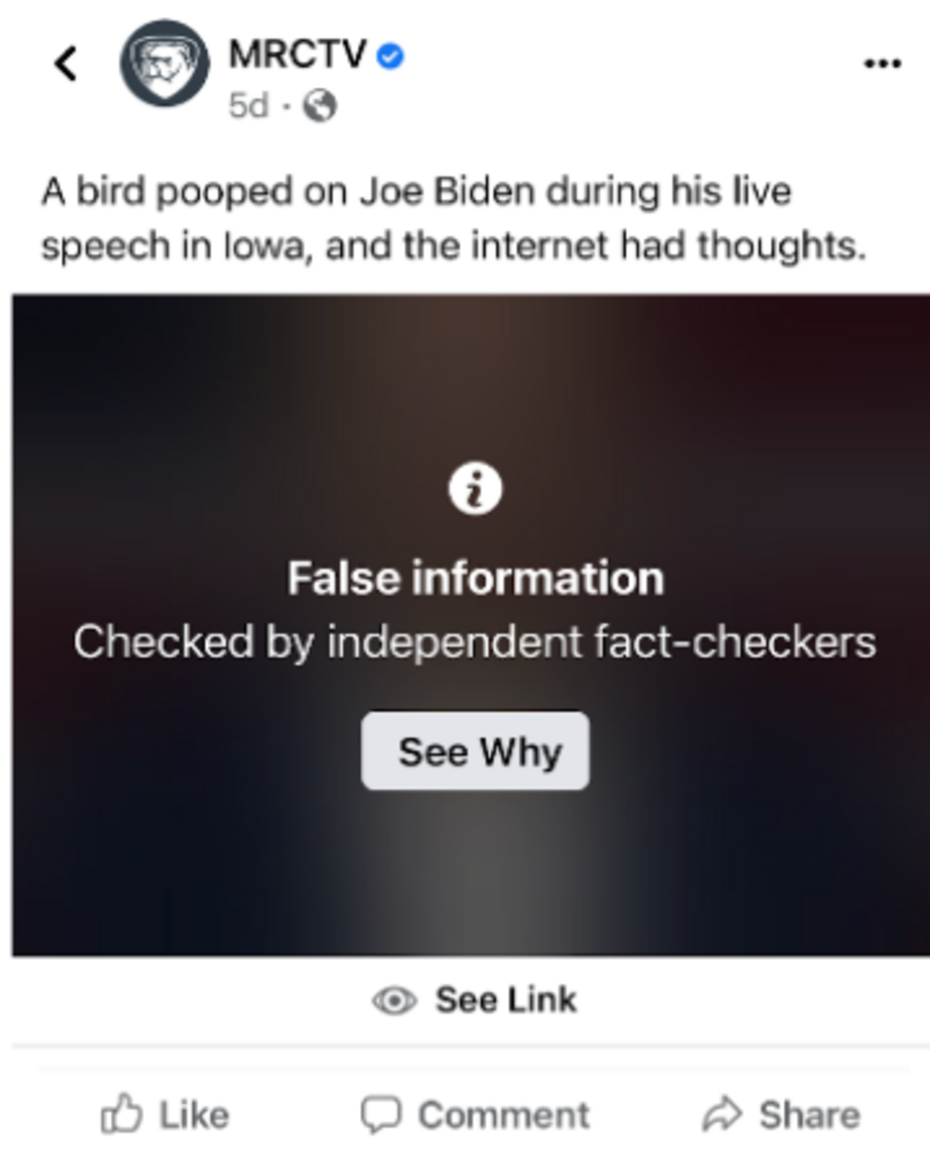 PolitiFact contributing writer Jeff Cercone actually spent time fact-checking posts that theorized that the “yellow” substance that fell on Biden’s coat was bird poop. But what was PolitiFact’s evidence to prove definitively that the poop theory was false? Journalists and the White House claimed it was “distillers grains.” PolitiFact also pushed how “[v]ideo from the scene clearly shows what one newspaper called distillers grains flying around from the top of a large pile near where the president was speaking.” That was the extent of the evidence. As Not the Bee writer Joel Abbott wrote when ripping Snopes for a similar fact-check: “[T]he White House has never ever lied about anything and has zero motivation to make Biden look good, so the bird argument might be dead. Sad!”

While Cercone acknowledged that “there were birds in what the president called the ‘giant barn,’” he appears to have taken others’ word for it and dismissed the poop theory out of hand. “It became clear fairly soon after that the theory was a load of bird poop, but by that point the video had been widely shared.” Cercone continued: “A video clearly shows particles flying around from a giant, nearby grain pile. We rate this claim False.” Did Cercone examine the substance himself? Did he smell it? Did he smush it between his fingers? Did he taste it? Did he ask the White House for a sample of the substance and have it tested in a lab somewhere? It doesn’t appear so.

Did a bird just poop on Joe Biden? pic.twitter.com/p2Ywv8CbRU

We are being discriminated against over whether a bird pooped on Biden. Facebook's so called ‘fact-checkers’ don't care about the truth. Their goal is to cancel conservatives. This is the state of social media.

But it got even more ridiculous. PolitiFact cited a Des Moines Register article which “showed a closeup image of the president’s jacket, which clearly shows a yellow color, not the traditional white usually dropped on us by our avian friends.” Ah, so the brilliant rebuttal from PolitiFact’s in-house ornithologist is that the substance was too yellow to be bird poop? Apparently Facebook saw that as enough of an excuse to censor MRCTV.

Abbott summed up the poop-is-too-yellow argument:

After all, everyone knows bird poop is always black and white. It never takes on the color of what birds eat, what with their fibrous diet and the characteristics of their relatively simple digestive tract. There's noooo way a bird inside a giant corn mill would be eating said corn, or that the bird's feces might look like corn. No way, José. We're done here!

Conservatives are under attack. Contact Meta headquarters at (650) 308-7300 and demand that Big Tech be held to account to mirror the First Amendment while providing transparency, clarity on “hate speech” and equal footing for conservatives. If you have been censored, contact us using CensorTrack’s contact form, and help us hold Big Tech accountable.