Sen. Rand Paul: Musk a ‘Good Addition to Twitter,’ Especially if It Drives Out ‘Left-wing Crazies’ 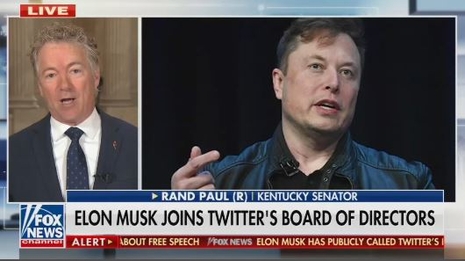 Tuesday, in an appearance on America Reports, Sen. Paul said Musk’s impact will be even more beneficial to free speech if liberal outrage over the news prompts Twitter’s “left-wing crazies” to abandon the social media platform they currently dominate:

"We've already seen some on the left wigging out and saying they are leaving Twitter if Elon Musk is coming. I say, good riddance. If the left-wing crazies that are trying to censor speech leave Twitter, then it'll be a better place."

And, just because Twitter has the legal right to censor speech on its platform, that doesn’t make it a good idea to do so,” the senator said:

“I do respect that Twitter’s a private company and has the right to regulate speech. I don’t think it’s a good idea, nor do I think it’s good for the country.

“But, I do think Elon Musk will be a good addition to Twitter and, hopefully, a good voice on their board for more freedom of speech.”

"Everybody should go out and compete," he said, calling for the creation of more social media platforms to compete with Twitter.  "The more competition, the freer the speech will be. The more ideas, the more speech, the better."