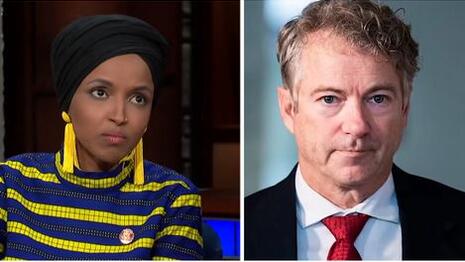 Rep. Ilhan Omar (D-Minn.), who in 2019 retweeted a post by actor Tom Arnold justifying a brutal attack that left Sen. Rand Paul (R-Ky.) with five broken ribs in 2017, has yet to tweet about this week’s anonymous threat to “finish” the job Paul’s attacker started.

On Monday, Sen. Paul received the threatening message, along with “a suspicious package,” prompting an FBI investigation, Fox News reports:

“The FBI is investigating a suspicious package, filled with white powder and bearing an image threatening violence, that arrived at Republican Sen. Rand Paul's home in Kentucky Monday.

“On the outside of the envelope was a picture of a bruised and bandaged Paul with a gun to his head and a threat printed beneath it: 'I’ll finish what your neighbor started you motherf------'”

As CNSNews.com reported at the time, on July 29, 2019, Representative Ilhan Omar (D-Minn.) retweeted a tweet from actor/activist Tom Arnold that mocked the assault on Sen.Paul, who suffered five broken ribs in the attack and had to have part of his lung removed.

The tweet read, “Imagine being Rand Paul’s next door neighbor and having to deal with @RandPaul lying cowardly circular whiney bullcrap about lawn clippings. No wonder he ripped his toupee off.”

Rand Paul’s neighbor is Rene Boucher. He attacked Paul on Nov. 3, 2017 when Paul was outside mowing his lawn.  Boucher eventually pleaded guilty to assaulting a member of Congress.

Rep. Omar does not appear to have utilized Twitter to chime in on the latest threat against Rep. Paul, to-date.

Editor's Note: This piece was first published on CNSNews.com.